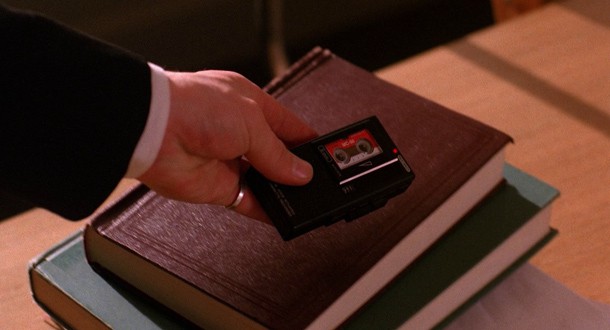 “Diane, I’m holding in my hand a device that reminds me of you.”

When I heard the announcement of Siri, the voice assistant built into the iPhone, like many other Twin Peaks fans I immediately thought Diane would’ve been a much better name. In fact, here’s hoping you’ll be able to start every voice command saying “Diane” without the iOS going crazy. UPDATE: Tested, and it works!

To make the comparison even more striking, here’s a Diane iPhone/iPod/Samsung case that looks almost exactly like Dale Cooper’s voice-activated tape recorder prop used to record the final words of Waldo the bird. Fitting your mystical voice assistant like a second skin, this dictaphone case is a must have accessory for all modern day Special Agents and Twin Peaks fans. As required per FBI regulations, Dale Cooper’s tape recorder iPhone case is extremely tough and the high-quality design is there for life.

Check out a few other Twin Peaks themed Samsung and iPhone cases.

Some feedback from the fans:

This may be the best piece of Twin Peaks merchandise I’ve seen.
—@Enzigary

Thank you for creating an iPhone case that I’ve wanted longer than I’ve wanted a new iPhone.
—Tony

@ThatsOurWaldo already have it and love it! Highly recommend you all getting one

@ThatsOurWaldo @sparkleamiej I got my iPhone cover as well. Sometimes I even fool myself and forget its only a cover. Awesome!