[bctt tweet=”“Peakies are out there, and there’s a lot of them.” —Kyle Twede of @TwedesCafe #RRDiner”]

A few days ago, Sherilyn Fenn confirmed an earlier rumor that Twede’s Cafe in North Bend, WA, will become the RR Diner from Twin Peaks again. All on Showtime‘s dime. “We haven’t got an official word yet, but that’s kind of what we’re hearing,” says owner Kyle Twede in an interview with pastry chef and Twin Peaks guide, David Introligator. 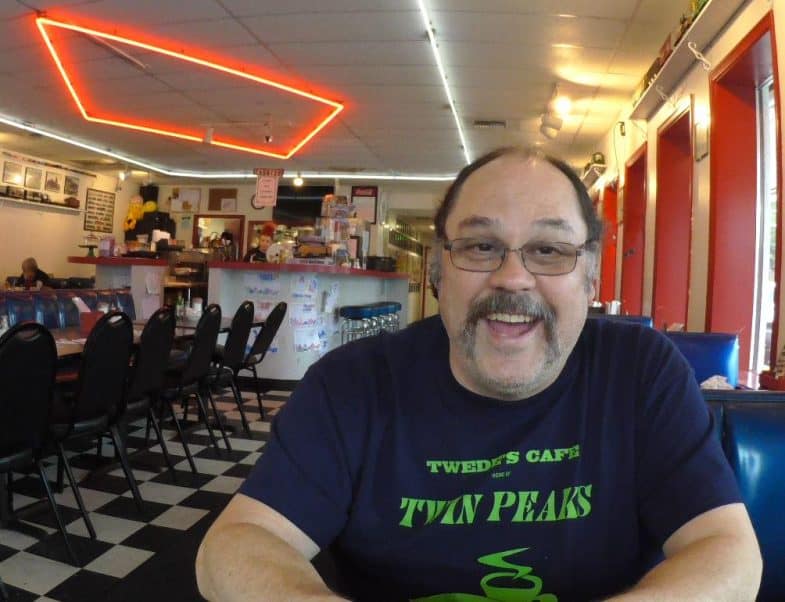 In this 9-minute interview recorded yesterday, Kyle, who has owned the business for the past 17 years, talks about the history of the restaurant since its opening in 1941, the Twin Peaks days of the Mar-T-Cafe, the arson fire in 2000, and that moment David Lynch walked through the diner’s doors around Christmas 2014.

Will Twede’s look almost exactly like the Double R Diner from the pilot and Twin Peaks: Fire Walk with Me, or more like the reconstruction on the soundstage that we see in most episodes? Will the place be rundown? Will it thrive? Only David Lynch and Mark Frost know (and we’ll learn from Mark’s book later this year), but we’re just glad Kyle told them: “Whatever you do to it, do it permanently. Don’t just Hollywood it.”

Bonus: KIRO’s coverage of the news