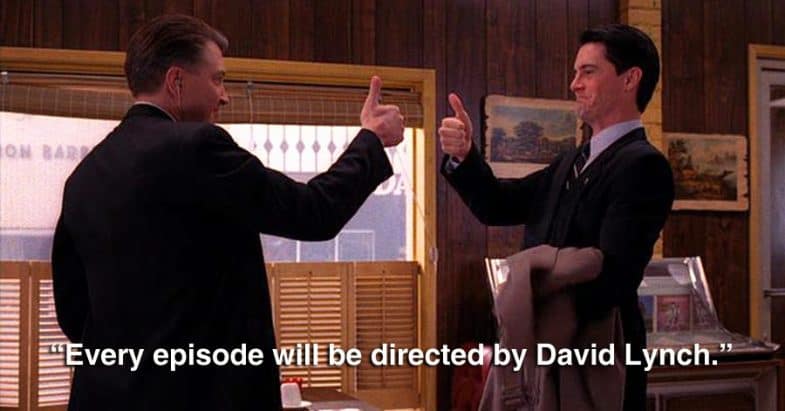 Twin Peaks is saved* and David Lynch is back.

After six weeks of rallying to #SaveTwinPeaks and also exactly one year after the Twin Peaks Blu-ray announcement, Twin Peaks fans can finally sleep well and have both wonderful and strange dreams again about that upcoming new season. Wow Bob wow! On a date that reads the same forward and backward, David Lynch and Mark Frost announced that the show is definitely coming to Showtime, despite the “rumors.”

Dear Twitter Friends, the rumors are not what they seem ….. It is !!!
Happening again. #TwinPeaks returns on @SHO_Network

The premium cabler followed the announcement with an official statement from their CEO, David Nevins:

This damn fine cup of coffee from Mark and David tastes more delicious than ever. Totally worth the extra brewing time and the cup is even bigger than we expected. David will direct the whole thing which will total more than the originally announced nine hours. Pre production starts now!!

Banzai! Whether this translates into longer or more episodes, or even an entire extra season is unknown at this point.

In an e-mail to Sherilyn Fenn, who will return as Audrey Horne, the director thanked the cast for playing a major role in making the negotiations successful, and everyone who rallied to save Twin Peaks.

But it wasn't a dream. It was a place. And you and you and you…and you were there… Good to be home. #TwinPeaks pic.twitter.com/UvICThbmRq

We want to thank ALL of you #peaksies for helping us #SaveTwinPeaks – WE DID IT!!!!!! https://t.co/TBlR9kMBDd

Looks like it's back on, rumored to have an order of more than nine as first reported. A good day for all Twin Peaks fans, myself included.

“I am thrilled that David and SHOWTIME were able to work out a plan so we can make more episodes of Twin Peaks?.” (Source: Hitfix)