Watch The Real Missing Pieces Of Twin Peaks The Entire Mystery: What Didn’t Make It From DVD To Blu-ray (Video)

Saturday Night Live’s Twin Peaks parody is a classic and must-see sketch for all Twin Peaks fans. It was included on the Definitive Gold Box Edition.

The spoof aired as part of the first episode of SNL’s 16th season on September 29 1990, one night before the David Lynch directed season two première. It was co-written by David Spade and Rob Schneider and it was Chris Farley’s first SNL appearance (playing Leo Johnson). Other cast members were Phil Hartman as Leland Palmer, Jan Hooks as Nadine Hurley and The Log Lady, Victoria Jackson as Audrey Horne, Mike Myers as Man from Another Place, and Conan O’Brien as Deputy Andy Brennan.

And last but not least, Kyle MacLachlan himself as Special Agent Dale Cooper, who summarized the spoof as “Everybody knew who killed Laura Palmer, except for Coop.”

Diane, 11:31 pm. Just finished washing up and ready for bed. This morning, I showered for nine minutes. Found seventeen hairs; three curly, fourteen straight. I used the Balsalm shampoo along with the conditioner courtesy of the hotel and delivering what it promised. A silky manageability. Cotton towel by Field Crest with just the right amount of absorbency. Consumed fifteen doughnuts today, Diane. All jelly. I’ll be injecting my insulin in four minutes. Diane, slept great last night. Got to find out what kind of sheets these are; not cotton, not rayon, silky. Damn fine sheets. I’m gonna get naked and slide around in them.

Kyle MacLachlan said that during rehearsals, the cast kept asking if they were getting their characters right. What do you think? Did they nail it?

Sheriff Truman: Cooper, great news. We found out who killed Laura Palmer. It was Leo. He just confessed.

Dale Cooper: Harry, I’m glad you’re here. Tonight we’re going to go up to One-Eyed Jacks disguised as Indians. Hawk said we could borrow his buckskins – you know, the one with the eagle feather. 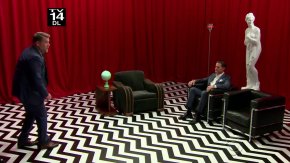