In anticipation of the Twin Peaks Blu-ray with the much desired deleted scenes from Twin Peaks: Fire Walk with Me, let’s go back in time to Everett, WA on September, 24, 1991. On this shooting day for Twin Peaks: Fire Walk with Me, David Lynch is directing several scenes with Ray Wise, Sheryl Lee and James Marshall in front of the Palmer residence, including a deleted scene in which Laura Palmer is approached by a concerned neighbor. And Anthony P. Anderson, Everett resident and Twin Peaks fan, is there as well, taking as many pictures as he can for us to enjoy 23 years later.

Anthony reached out to Welcome to Twin Peaks and sent an extended slideshow —which I’m proud to première below— featuring many rare behind the scenes photos along with notes and personal observations. “[Here are] some good shots, many blurry and shoddy due to distance and camera. My favorite is Ray Wise hopping on the back of James Marshall’s bike and taking off for a ride around the block. Those two were to funny together!”

“What I found interesting to watch was how David Lynch approached shooting these small related scenes,” Anthony notes. “Most directors will shoot a scene many times over until they have it and then move on. David would shoot a few takes, then move to a new shot, then after a few takes, move back to the first shot and do some more. Being an artist first, he seems to approach filmmaking very similar to that of painting. He works on an area, then moves to another, then moves back to the previous area if he feels it needs something else.”

Filming A Deleted Scene from Twin Peaks: Fire Walk with Me

Photos of the filming of the deleted scene appear towards the end of the slideshow. Below you can read the entire scene as written out in the original screenplay. The soundtrack to this video slideshow was composed by Anthony himself and features a few samples from the movie. Anthony is currently a docent on Alcatraz and has published a 3D book on the topic. He’s also a ghost hunter and manages a blog focused on the Electronic Voice Phenomenon. 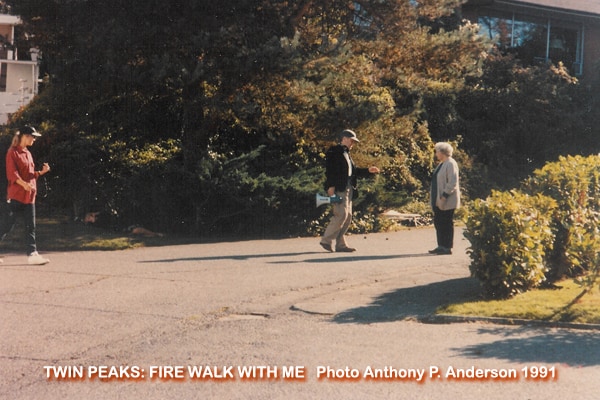