From “The David Lynch Interview” on Shortlist.com, David Lynch shares his thoughts on the amazing AMC series Mad Men: 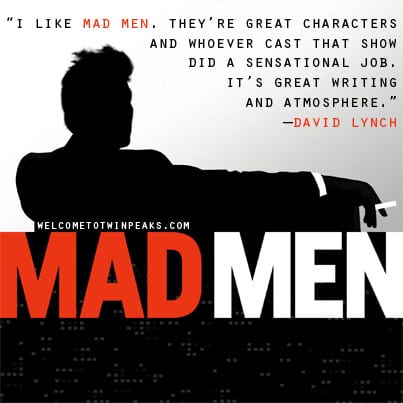 “I like Mad Men. They’re great characters and whoever cast that show did a sensational job. It’s great writing, great atmosphere.”

Excitingly he reveals that he’s met some of the cast but confusingly, for a grown man and film director, he refers to them by their character names.

“I had the opportunity to meet Peggy Olsen and Don Draper…” I interrupt to congratulate him on avoiding their actual names — something he has in common with my elderly relatives. What’s more he insists on addressing the actors as their characters even when he’s with them. “That’s who they are to me. I called Peggy, ‘Peggy’.”

“No not a bit. I met them in Cologne, Germany and my wife and I had drinks with Peggy in Paris.”

Is she as nice as her character?

Elizabeth Moss later revealed her side of the story on Jimmy Kimmel:

From the very beginning of the drinks (with David Lynch), he called us by our character names, Don and Peggy. It kept going and we went with it. (…) And then he e-mailed me afterwards and he wrote “Dear Peggy” and finished it with “Give my love to Don.” 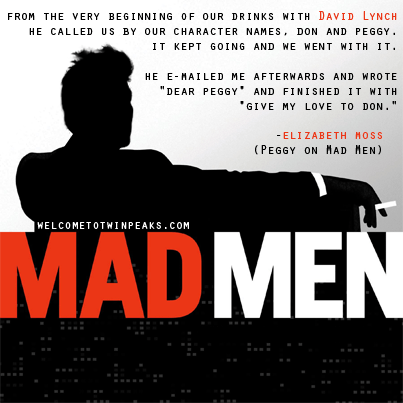