The Packard rumor mill continues to spin in the town of Twin Peaks. After dropping two major “Twin Peaks might return” bombs in 2013 and recently confirming that David Lynch shot something related to Twin Peaks, Ray Wise continues to tease us. Those who are tired of all the speculation are free to stop reading now, but in an interview with David Wangberg last Friday, Ray said the following about the possibility of a Twin Peaks remake:

They wouldn’t remake it. If anything was done, it would be 25 years later. It would never be a remake of anything we already did. Maybe you just didn’t mean to use that word, I don’t know. A remake, no, but it would be something new and fresh. David always said the town of “Twin Peaks” is still there; it’s still going on whether we watch it or not. So, who knows what’ll happen in the future? It would be 25 years later, not anything remade. Does that answer your question?

This being said after last week’s Twin Peaks shoot and Ray explicitly mentioning “25 years later” multiple times, pretty much insinuates David Lynch and Mark Frost will be taking us back to town (or more likely: The Black Lodge) soon for a brief meeting with Dale Cooper, Laura Palmer and probably a few of our favorite doppelgängers!

Are you excited about the Twin Peaks surprise they have in store for us (probably for the upcoming Twin Peaks Blu-ray release)? Show it and snap your fingers in our fan-sourced Let’s rock project. 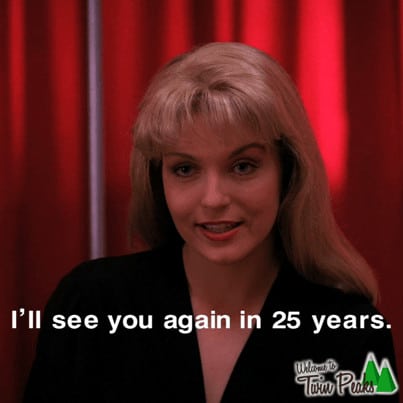