Without Twin Peaks, nobody might’ve ever heard of Moby. It was the Laura Palmer’s Theme-sampling Go that put Richard Melville Hall (that’s his real name) on the map of 90s electronic music. Luckily for us, the Harlem-born musician went on to do (even) great(er) stuff. In a recent interview by The Creators Project, Moby mentions Twin Peaks and its co-creator, David Lynch. 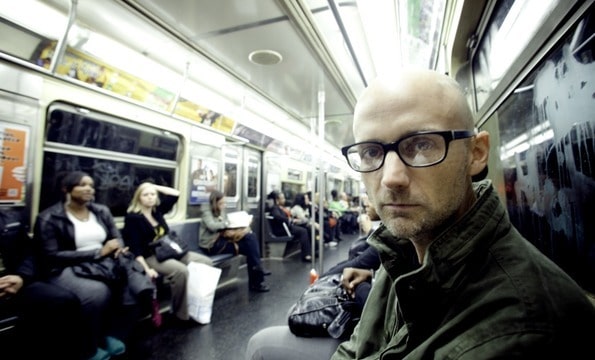 What do you have as your profile picture?

I’ve read online that you’re a big David Lynch fan and you’ve also collaborated with him.

It’s interesting because I’ve met some of my heroes and been disappointed. But David Lynch, he’s my favorite filmmaker of all time, hands down. And I love 99% of what he’s made and he’s also one of the nicest people on the planet. He’s just funny and kind and decent, so actually becoming friends with him has made me like his work more. You would want him to be your uncle, and you’d go over to his house and you’d live in the woods and he would take you snowshoeing and you’d come back and chop wood and make cocoa. He’s just got this old school 1940s-1950s cinematic vibe.

That’s interesting because in his work he kind of subverts that ideal of homeliness. Is there any indication that he has a darker side, this dark creativity?

It’s a dark creativity, but it’s really playful. I was at his house a couple of months ago, he lives in this interesting compound, and we were walking by this studio and there was something disgusting, you could smell it. And I asked him, “What’s that disgusting smell?” He’d taken a bunch of chicken and nailed it to his wall because he wanted to grow maggots. But he wasn’t doing it in any sort of dark way, he was doing it because this seemed exciting to him. He wasn’t trying to be like all evil and nasty, but he thought it’d be really fun to nail a bunch of chicken to the wall to see if he could grow maggots. He was very frustrated because he didn’t grow maggots, the chicken rotted, but no maggots.

Some videos of Moby-Lynch collaborations:

Moby’s Shot In The Back Of The Head video, directed by David Lynch

Moby describes the evolution of The Poison Tree, a track he donated to the David Lynch Foundation Music Project.