I remember when I was a kid, you know, dividing my heaps of leisure time between Princess Zelda and Laura Palmer, I always hoped somebody would make a video game adaptation of Twin Peaks. And for a while, there were indeed crazy rumors going around that Hi Tech Expressions was to release a Twin Peaks video game. Here’s what Nintendo Power wrote in the gossip column of one of their early nineties editions:

Twin Peaks, which is based on the bizarre T.V. show, will be role playing in style, with the player trying to solve the mysteries of Twin Peaks as one of the many strange characters on the show. The plot is based on the second season, with multiple endings possible depending on which character is played.

While I like the idea of multiple endings —also, could there please be NO ending?— the second season storylines wouldn’t have been the best source material for an RPG. Add the fact that Hi Tech Expressions wasn’t exactly known for its line of outstanding games —Beethoven: The Ultimate Canine Caper, anyone?— I consider it a fortunate event that this particular 8-bit NES game never saw the day of light. Wondering how an old-school Twin Peaks game would look like, I ventured into the wonderful world of pixel art and found some inspiration…

A few hours into this Police Quest-type of adventure game by Sierra On-Line, the player would enter an interactive version of the trippy dream sequence. Some commands to get you started: “DRINK COFFEE”, “ASK WOMAN IF SHE’S LAURA PALMER” and “LOOK BEHIND THE CURTAIN TO SEE WHAT ON EARTH THAT MOVING SHADOW IS.” 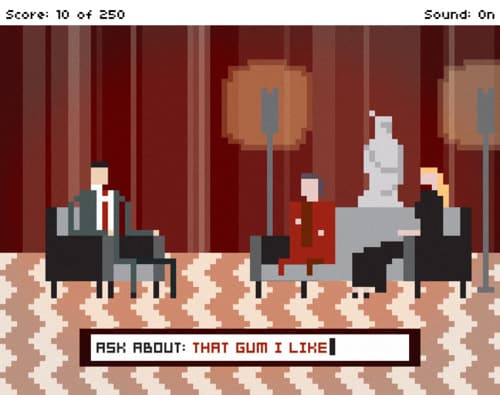 Let’s Rock pixel art by Andy Helms (“Ask about: Gum you like”)

Or it could’ve been a Final Fantasy spin-off, a fantasy role-playing video game filled with secrets. And these cute, little pixel characters.

The Legend Of Twin Peaks

After hours of wandering through Ghostwood Forest, the player finds the secret entrance to The Black Lodge at Glastonberry Grove and he’s welcomed by the Little Man From Another Place saying “Buy somethin’ will ya!“… but then backwards. 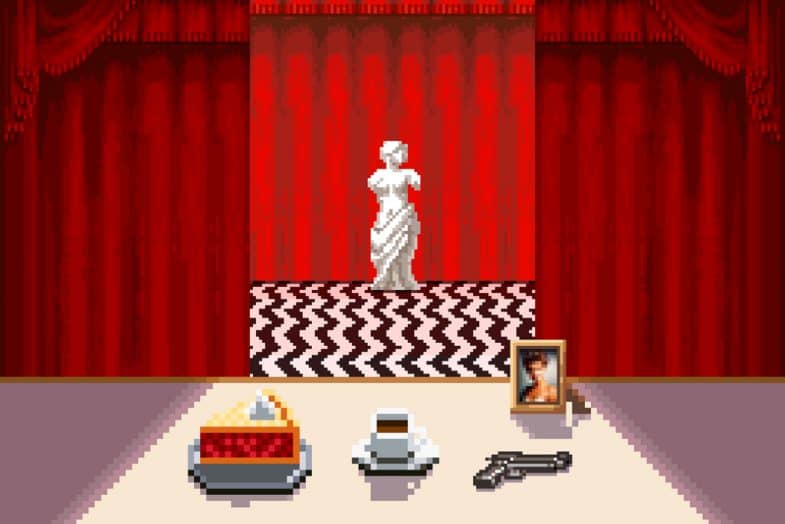 Now what about that lo-fi Nintendo 8-bit music? We don’t have hook Angelo Badalamenti up with a chip maestro, because all has been taken care of by chiptune artist Norrin Radd.

I think this is enough proof that our favorite TV show would make a brilliant old-school video game. But only, and only under the condition that a certain brilliant person would oversee the production…

That game you like is going to come back into style! Be Cooper! Find the Killer! Drink the Coffee!