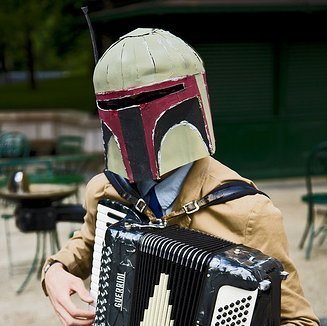 About six years ago, Nathan Stodola grabbed his mom’s accordion and a Boba Fett helmet he made for Halloween, and headed to New York Comic Con to play some music for its attendees. His setlist wasn’t restricted to a medley of Star Wars songs, but also included Danny Elfman’s Batman Theme, the main theme from Zelda, and, as previously featured on Welcome to Twin Peaks, Laura Palmer’s Theme. Encouraged by the positive response, Nathan continued to perform on the streets of NYC for several years under the Renegade Accordion moniker.

Except for a yearly appearance at New York Comic Con, his public shows have become rare. But Nathan keeps adding more music to his repertoire, including two more songs from the Twin Peaks soundtrack. And because today is Star Wars Day, but also because these creative accordion interpretations are simply fun to hear, enjoy Renegade Accordion’s take on Angelo Badalamenti!

Meet the man behind the mask.

Did you know there’s actually a 1st-degree connection between Star Wars and Twin Peaks, other than the fact David Lynch was asked to direct Return of the Jedi? Boba Fett’s first public appearance in 1978 was modeled by Duwayne Dunham, who was The Empire Strikes Back’s assistant editor and would later edit and direct episodes of Twin Peaks, including the entire new series!