Previous Next
“Twin Peaks is still one of the most spectacular things that ever happened on TV.” —Carel Struycken Click to Tweet

Yesterday, on Twin Peaks Day, Carel Struycken was a special guest at Shortcutz Amsterdam, a free and weekly platform for filmmakers and movie lovers. The actor spoke to its attendees live from his home in Los Angeles, and naturally, he was asked about Twin Peaks.

Shortcutz was so kind to send us the part of the conversation when he talks about working with David Lynch, and his chance of returning in 2016 as The Giant.

“I haven't heard anything yet, but I think I have a reasonable chance of coming back.” —Carel Struycken Click to Tweet

It was about the most unusual interaction I had with a director. I think it was not typical for how he works, but to me it was like: “Oh yeah, this all makes sense that he works this way.” […] The impression I got being on the set was that it he wasn’t so much directing the people as he was creating an atmosphere so everybody became part of that “reality construct”. It was like a mass hypnosis. That’s how I saw it.
—Carel Struycken

What do you think? Is Twin Peaks unthinkable without the presence of Dale Cooper’s friendly-seeming helper from the Black Lodge? 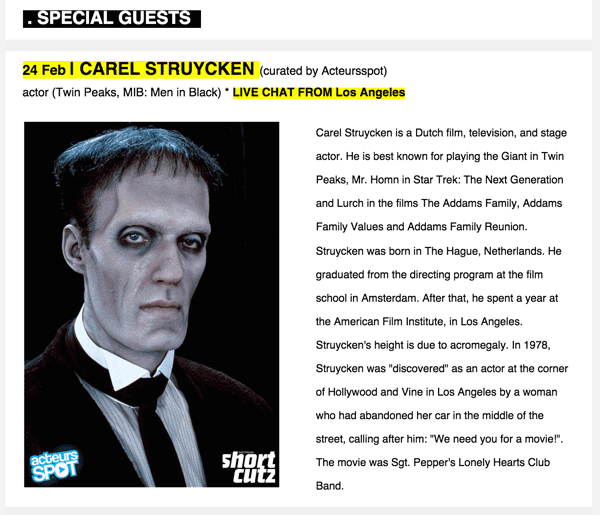