Jeff Goodwin, the makeup artist on David Lynch’s Blue Velvet, recently talked to StarNewsOnline about “Mister Ear,” as the crew used to call the most famous prosthetic ear in the world.

Originally, there were two ears. Co-star Isabella Rossellini, as the tortured singer Dorothy Vallens, was supposed to flush one down a toilet but the scene was cut (and lost forever, as it’s not part of the 25th anniversary Blu-ray release) In the end, only the left ear had screen time.

Goodwin first made a cast of his own ear, adding a little extra skin and blood. It was, after all, supposed to have been cut off. Lynch looked it over and said, “That’s great, Jeff – now make us a grown-up ear,” Goodwin recalled. Apparently Goodwin’s was too small. In the end, they modeled them after producer Fred Caruso’s ears.

For some extra realism, Goodwin added some hair to adhere to the tissue. That hair came from David Lynch, recycled after a haircut.

At first, Goodwin used ordinary latex to sculpt the ear, but he wasn’t happy with the results. Then he substituted silicone so the fake ear would flop like a real one. “That was about the first time anyone had ever tried silicone for something like that.” Goodwin said he enjoyed Lynch’s aesthetic vision, which mixed elements of the 1980s with styles from the 1940s and 1950s.

“I think that’s one of the things that makes the movie so timeless,” Goodwin said.

The legendary ear prop is also rumored to have made a cameo in Twin Peaks.

UPDATE: Brian Linss just tipped me off that the prop currently resides at Movie Madness Video in Portland, Oregon.

UPDATE #2: Here’s a photo of the twins “reunited”. Can you recognize the ear that was used in the movie? 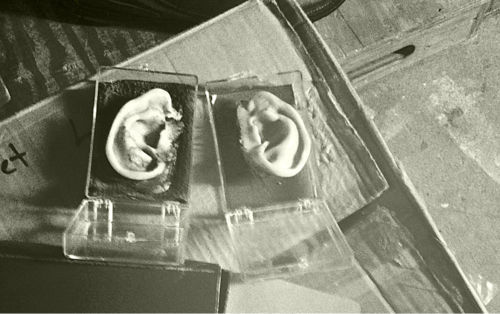