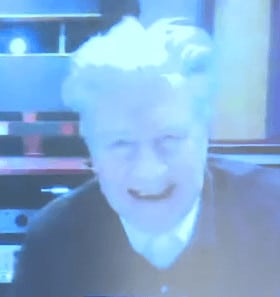 In May, at the International Music Summit in Ibiza, David Lynch and his studio engineer ‘Big’ Dean Hurley were interviewed over Skype about the director’s upcoming electronic album. Unfortunately, my Spanish source got the release date of  wrong, as it was not revealed at all. When asked about it, David Lynch responded: “Uh, we have a title (…) but we haven’t told anybody the title. And we have a release date, but I don’t know what it is.” I checked with Rob da Bank’s Sunday Best Recordings, and they have let me know that it should be released by the end of 2011.

But the good news is that you can now watch the entire 33-minute IMS keynote interview. I’ve already spilled some beans via our Waldo, but there’s plenty of interesting information left. Enjoy!