Earlier this month, David Lynch was interviewed by Moby at the IMS Engage 2014 conference in Los Angeles. Moby indirectly owes his entire career to the director —the musician’s breakthrough hit Go is heavily based on Laura Palmer’s Theme (“I tried to steal it“)— and he’s known to be a big fan of his interviewee. He’s got Killer BOB as his Facebook profile picture, the One-Armed Man’s quote “We lived above a convenience store” as his Instagram bio and one of his interview questions goes “Is Inland Empire my favorite movie of the last 10 years?” But the admiration is mutual and David Lynch collaborated with Moby a couple of times, including but not limited to a remix of The Poison Tree and a video for Shot In The Back Of The Head.

During the 48-minute interview, Moby asks mostly awkward, and some interesting questions covering a range of things including David Lynch’s private life (“When was the last time you used your microscope and why?“), transcendental meditation (“Have you ever done yogic flying?“) and, of course, his movies (“What is your relationship with L.A. and why has it been such a central character in so many of your movies?“). His most exciting question, however, remains unanswered:

Moby: I think we can agree that the TV show Twin Peaks has heralded what we’ll call the weird, quasi golden age of television. (…) As there has been this move towards interesting TV, have you been tempted to write or develop a new TV show?

David Lynch: Mo, that’s an awkward question and I’m not gonna answer it.

And here’s a contender for the best interview answer in history:

Moby: If there was a question that you could be asked right now, what would the question be?

IMS Engage was designed to compare and contrast wonderful worlds and somehow / somewhere relating it back to electronic music. And it had always been our goal to entice a Hollywood film director down from the Hills to meet with an electronic artist. The pairing then of legendary film director David Lynch (Mulholland Drive, Inland Empire and Blue Velvet) with Moby – one of our most influential electronic artists to date – had the IMS Engage delegation at the edge of their seats from start to finish. With quinoa and sperm being the main talking points of the day!

The presence of Lynch at a music summit was special in itself, and Moby came armed with a set of questions which were well prepared – as you would expect from a man with a huge history with the director (remixing each other, sampling the music from “Twin Peaks”, sharing similar interests in art). The discussion was thought–provoking, funny and gave an intense insight into the mind of Lynch’s genius. Moby chose to not ask many questions about music, entertainment or electronica, focusing more on God, death, maggots, painting and Transcendental Meditation. We also learned more about Lynch’s love of factories, his favorite being in Poland. Moby opened up about his up-bringing, himself living in an abandoned factory, which spawned inspiration for his career. Lynch asked Moby his theory on life after death, to which Lynch’s response to his answer was: “That’s the worst theory I’ve heard.“ 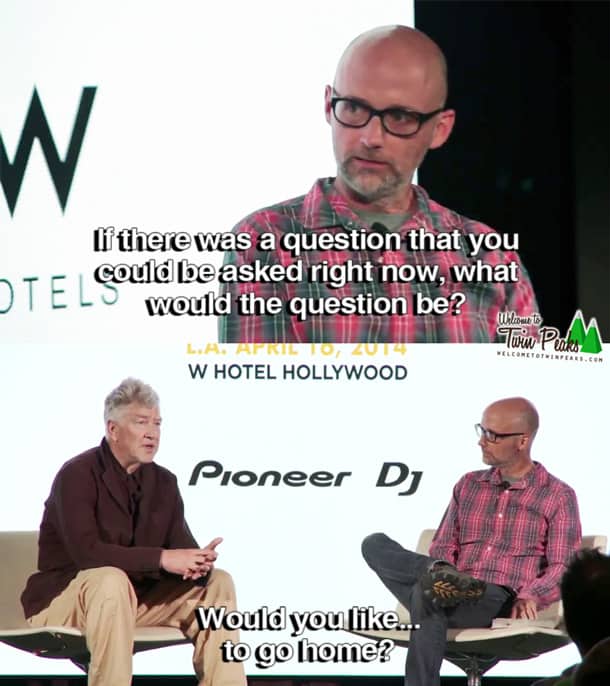 “It is beyond the beyond… great,” David Lynch says about this recording.