In heaven everything is Vine.

The moment we’ve all been waiting for:  director David Lynch joined Vine today!

This is David Lynch’s first Vine called “Another mystery-“

At 6 seconds, this is probably his shortest movie to date, am I right? Now if your brain is going: “BUT WHAT DOES IT MEEEEEEEAN?” please refer to this post.

UPDATE: David Lynch rarely offers an explanation for his art, but he told SPIN exactly what his first Vine means:

“That man is experiencing big love. And that’s what The Big Dream is all about. When that man was walking down the street, and he saw you, you can picture that electric lightning bolt going through him. Big love.“

While we patiently wait for his next one, here are my 10 favorite “Lynchian” Vines that I’ve been collecting since the launch of the short video platform in January. Don’t forget to turn on (and off) the audio for each one by clicking the little speaker icon in the corner.

1. Oren Wagner calls himself “the David Lynch of Vine” but he’ll have to step aside, because the master himself has entered the building.

2. Kasia Kowalczyk’s “Hypnosis” doesn’t only have a cute brunette and a terrifying ceiling fan. It has Dark Night of the Soul featuring David Lynch by Danger Mouse and Sparklehorse on the soundtrack!

3. Matthew Lovell gets a call from Lost Highway’s Mystery Man.

4. Another one from Matthew Lovell. This one has a great cliffhanger!

5. Bronx Red captures what’s probably a key element in every David Lynch movie: a room with a flashing light.

6. Austin Gregs made his own Eraserhead baby. Wait, that came out wrong…

8. Am I the only one getting an Inland Empire meets Killer BOB vibe from Emilyorillac’s “Baby paul” Vine?

9. Adam Goldberg is very popular on Vine and I get the feeling there may be a David Lynch story hidden in this one.

10. Extreme close-ups and weird voices. Noel Stanley has Lynchian down.

Welcome to Twin Peaks is on Vine too! Just follow user Twin Peaks to stay in “the loop“. Here’s a recently posted stop-motion Vine…

Feeling inspired? Make your own #Lynchian Vine and share it in the comments! 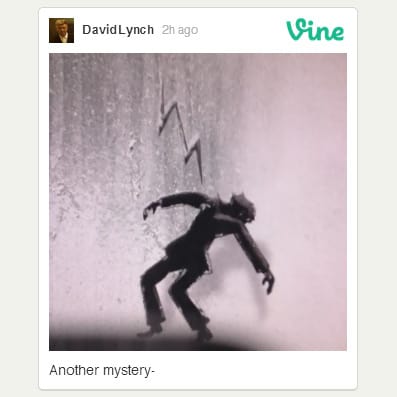 David Lynch's First Vine And 10 Most Lynchian Vines has already gone places with 630 Facebook shares
You can just stay where you are, but please share this post