Hey, you wanna go for a ride?
—Frank Booth

This year, David Lynch’s Blue Velvet celebrates its 30th anniversary and the milestone is being celebrated with a return to cinemas in the United States and the United Kingdom.

The 1986 film noir will open for a week run at Film Forum in New York City from March 25th through March 31st 2016. Other anniversary screenings of the DCP restoration are yet to be announced, and a U.K. reissue is expected in Autumn 2016.

UPDATE: I previously mentioned a newly restored version would be screened, but Park Circus Films confirmed to me it’s an existing digital print from their archives. Still awesome!

“Heineken?! F**k that sh**t! Pabst Blue Ribbon!”  Aaah! An azure sky; glistening red tulips along a white picket fence; a stalwart fireman, his Dalmatian beside him, waves from a fire truck moving in slo-mo; a crossing guard directs school kids; a woman sips tea in front of the TV while her husband waters their manicured lawn – all in gorgeous color & Scope, accompanied by the oh-so-soothing voice of Bobby Vinton singing the title tune. But wait. Now the hose is caught – is the man having a stroke?!  And why are we power-diving into the earth and seeing those disgusting bugs, in ultra-close-up?! Oh, wait a minute, this is a David Lynch film. So, here’s a tip for all-American square Kyle MacLachlan: Don’tcheck out the rotting, ant-infested severed ear in the grass. And, even though you’ve got this thing for mysterious “Blue Lady” Isabella Rossellini, Don’t hide in her bedroom closet in hopes of sneaking a peak. But this is a Lynch movie, so its depiction of idyllic “Lumberton, U.S.A.” shows its dark underside of sexual violence, kidnapping, murder, and karaoke, and, in Dennis Hopper’s amyl-nitrite-snorting Frank booth, one of the most dangerous, repellent, and magnetic psychopaths ever to haunt the screen, while Laura Dern, in her first major role, incarnates the girl next door as extremely as Hopper does in essaying pure slime. Controversial from its premiere, Velvet polarized critics like no other movie, with a thumbs-downing from normal champion of the offbeat Roger Ebert, but with Boston, L.A., and National Film Critics awarding it, the Academy nominating Lynch for Best Director, and an anointing by Pauline Kael, who hailed its “charged erotic atmosphere” and “aural-visual humor and poetry.” DCP restoration. Approx. 120 mins. 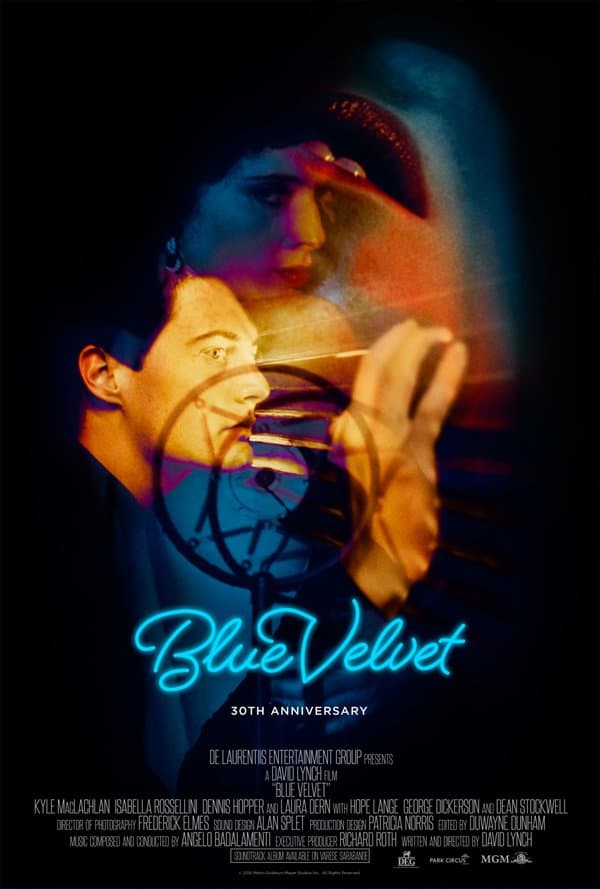