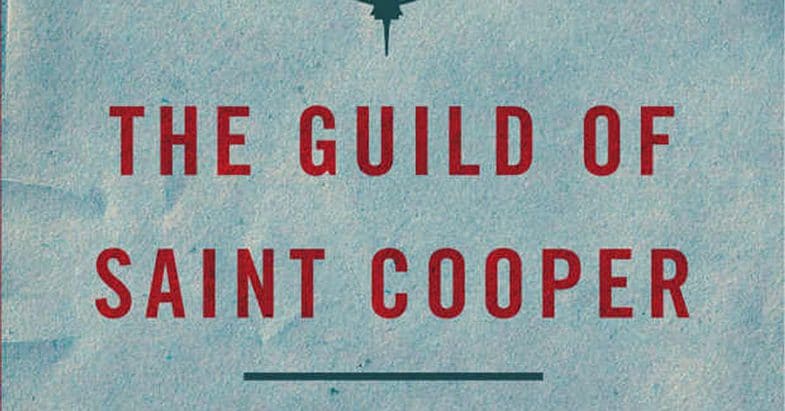 The Guild of Saint Cooper is about an obscure author in a near-future post-evacuation Seattle who is drawn into writing a revisionist history that sets the book itself unspooling backward into its own alternate history and into a world—featuring giant rhododendrons, space aliens, and a certain Special Agent Dale Cooper—increasingly both familiar and unrecognizable.

Shya Scanlon‘s latest novel is not so much fan fiction as it is a twisted tribute to one of the most inspiring characters ever seen on television. A fan of Twin Peaks since his late teens, the New York-based author found a way to incorporate Dale Cooper into his story, even giving the FBI’s finest a voice, yet staying clear of any attempt to enter David Lynch and Mark Frost’s unique world. Sure, there are Twin Peaks references throughout the book, but Guild’s tone is different and influences are many, most notably Tim Hilton’s biography on John Ruskin. Below you’ll find a short excerpt in which the titular character appears to the lead, Blake.

The Guild of Saint Cooper is out now on Dzanc Books and available as paperback and eBook from Amazon and Barnes & Noble.

The Guild of Saint Cooper by Shya Scanlon (excerpt)

The first man looked over at the other and shrugged, and the second, without

“This area of the hotel is reserved,” he said, “for a private party.”

I stood there for a moment, not knowing what to do. Mitch must surely have

returned by now, and there’d be no shame in heading back to the casino floor to

explain what had happened. Who could blame me for losing Cooper? But a greater

part of me felt compelled to see this through, to locate the man before reporting

back. To have an idea, at least, where he’d gone.

Large round tables adorned with green tablecloths and triangular paper

“Hey, what did I say?” the second man said, turning around.

He hung his banner corner from a hook and began to climb down the ladder.

I took a step back, only a few feet now from the swinging door behind me, close

enough to hear the staff hurrying about their errands in the hall.

not part of the event either, so maybe you told him to leave too. Did he go out

through the front door?”

Why wasn’t Mitch calling, I wondered. The man began walking toward me

from across the room. He had curly red hair, and it strobed slowly as he moved

beneath the lights. I took out my cell to see if I’d missed a call, but its screen was

dark—I’d turned it off the night before. I pressed the power button and the screen lit

up, but it would take a minute to boot and find a signal. I didn’t have a minute. The

man came closer, and I stepped back again, until I could feel the cool metal door

against my shoulders. I noticed the first man, still on the ladder, was speaking

quietly into a small radio, and I heard it click on and off as he sent and received.

Surely calling Security. But then why the aggressive posturing? Was I about to be

physically removed from the room? I decided to save him the trouble and pushed

back against the door—if he wanted me to leave, fine, but there was no cause for

altercation—but the door did not open. I looked back through the head-high

There was no activity, there was no staff, and the red-haired man was closing in.

My phone let out a single, clear note to indicate a voicemail, and I stepped

quickly behind a round table while dialing Mitch. When I looked back up the man

was standing two tables away, the first man coming quickly to join him. Together,

they moved toward me, splitting apart, and by the time Mitch answered they’d

cell phone out of my hand. It skittered across the floor and, still on, weakly

The redhead grabbed me and wrapped a big hand around my mouth. I

struggled against his grip, pulling at his arm and kicking backward, but he held fast,

engulfing me, and lifted me off the ground in a bear hug tight enough to push the air

from my lungs. As quickly as he squeezed, though, he released, just enough to let me

My body went limp. The man smelled like women’s perfume, a sweet, bright

smell that tingled my nose, and as he held me, the other man looked up at me and

shook his head. I farted. Someone emerged from the shadows along the side of the

room, mere feet from where I’d stood. He was still partially obscured by darkness,

but I could see his silhouette against the illuminated wall behind him. It was Cooper,

not a hair out of place.

“Did you know,” he said, “that New York City has a goose overpopulation

problem? It’s true. And as they pose a threat to airlines operating out of the

Kennedy, LaGuardia, and Newark airports—not to mention the smaller airfields in

Cooper’s voice was calm, dispassionate, but not cold. It was instead curious,

alive with a sincerity that betrayed the seriousness of his interest in this anecdote,

as though he were working something out for himself, and, though he was speaking

to me, I was incidental to the process.

“These tactics include oiling the eggs, planting tall grasses, scaring the birds

away with trained dogs, and a variety of other measures. But do you know what the

With this, Cooper stepped forward, allowing me to see him clearly. For the

first time since the Elk’s Club parking lot I felt a rush of recognition, an untethered

emotional response that flooded my body in waves. It was more powerful than déjà

vu, more urgent, as though I hadn’t had this experience before, but should have. As

though the universe were somehow correcting itself, or at least correcting my

position in it. Cooper’s tuxedo was tight and immaculate, painted on, and he signaled

to the redhead, who let me down slowly, then released me. As my feet touched the

floor I staggered, then felt hands on my shoulders. I tried to nod. The Guild of Saint Cooper is available as paperback and eBook from Amazon and Barnes & Noble.