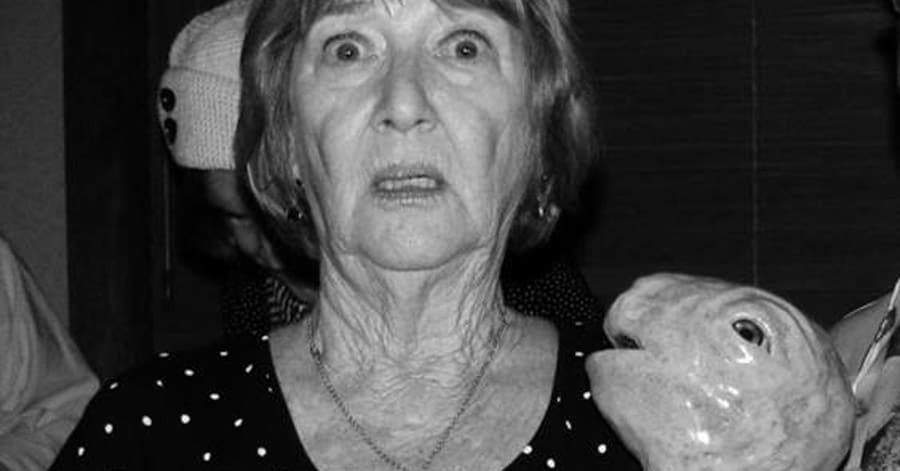 Welcome to Twin Peaks asked the attendees of the 2015 Twin Peaks Fest to share their strangest memories from this year’s incredible edition. Here’s as much as they were willing to disclose…

During a midnight tour guided by the breathing Twin Peakspedia that is Josh Eisenstadt, a group of fans ventured into the woods to visit the exact same spot where Donna Hayward and James Hurley tried to hide the half heart necklace gifted by Laura Palmer. Twenty-five years later, history repeated itself.

But will the necklace still be there when they go to recollect it next year? Or did Dr. Jacoby follow them out there again?

Thanks to Purdue Boiler for the photos! 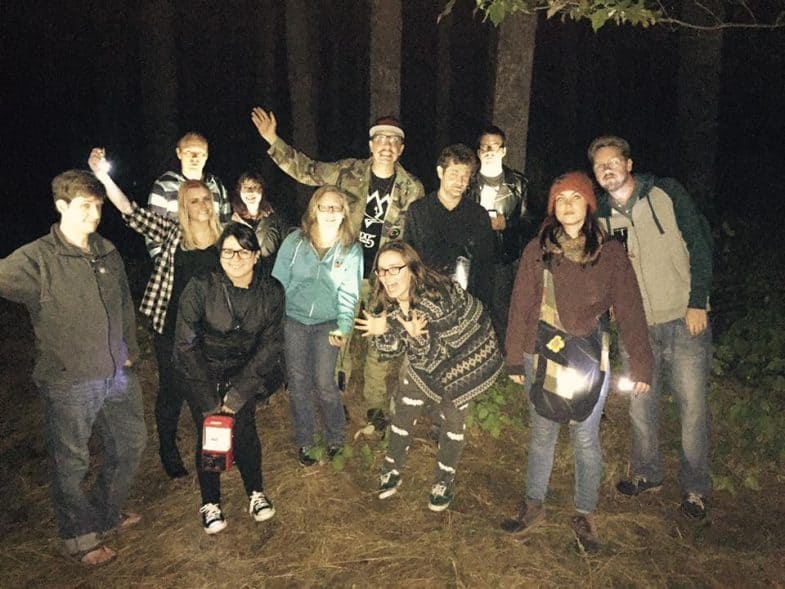 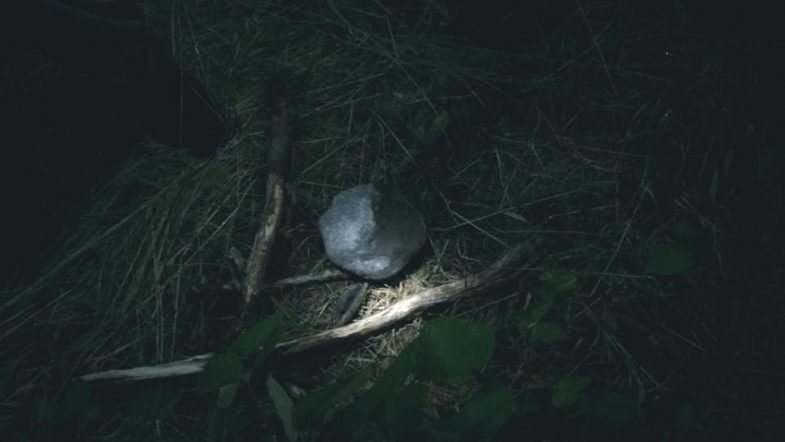 According to Josh, who got to fulfill a lifelong dream of guiding his first official tour around the Kiana Lodge property in Poulsbo, WA, this is the branch that we see in the very first shot of the Twin Peaks opening titles.

My favorite moment was holding up my phone so somebody could take a picture of the branch from the opening credits, with a still of the branch in the foreground. Somebody got a good shot of us doing it.
—Fletcher Sandbeck 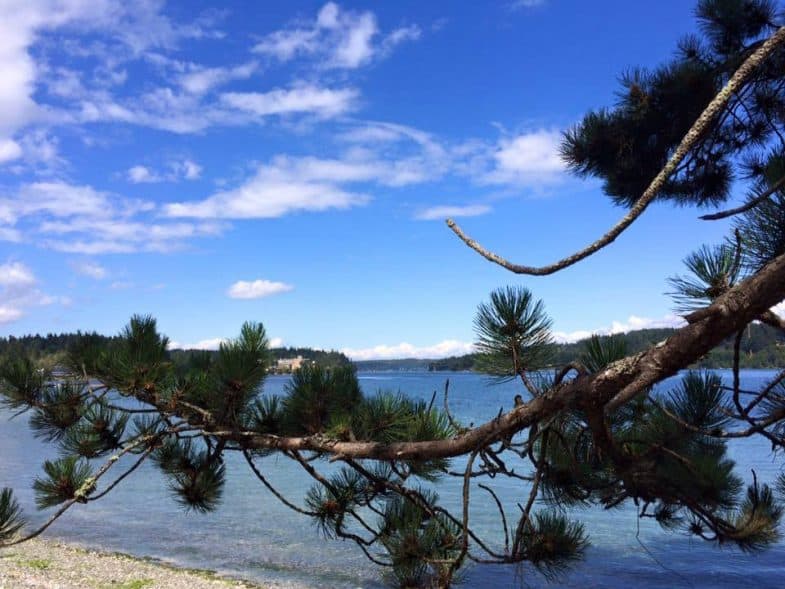 If you need a hint, here’s the branch about 26 years younger. No sign of the bird, which at the fest is often referred to as “Flappy.” 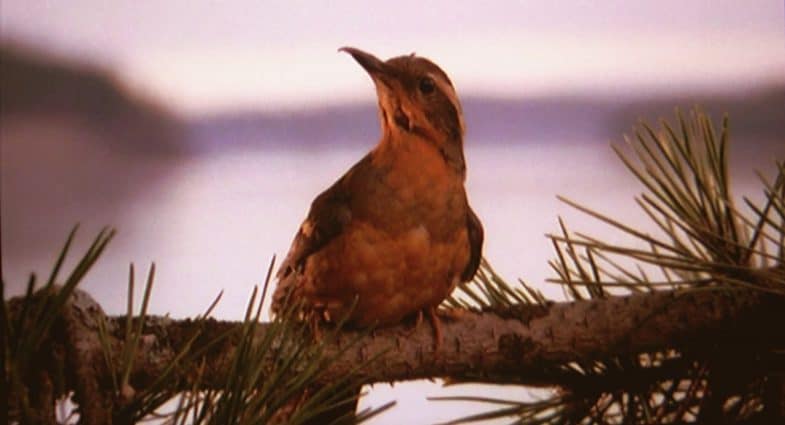 One of the highlights of Saturday’s filming locations bus tour was an unexpected photo opportunity in Ed and Nadine Hurley’s front yard.

My favorite part was getting to stand in front of Nadine’s house. I asked everyone to cover an eye in homage to Wendy Robie.
—Scott from Red Room Podcast. 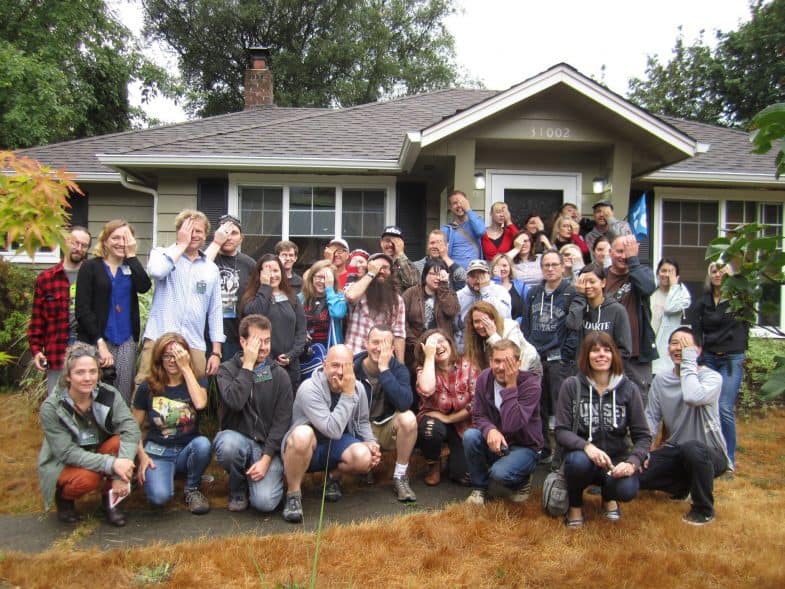 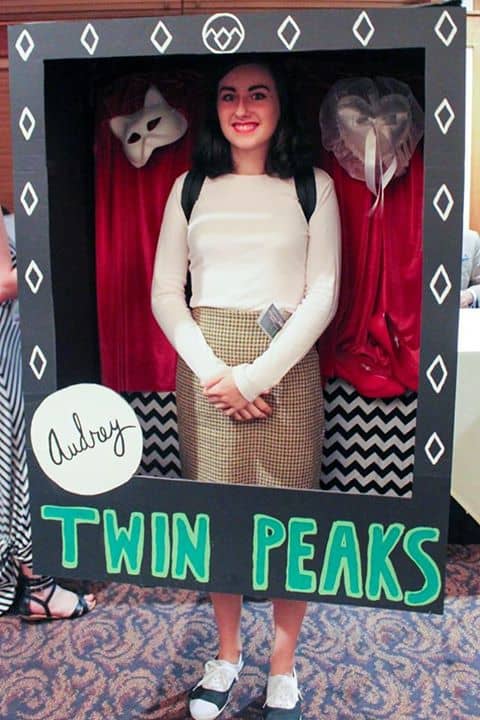 Deservedly, she got what she wanted: she won the first prize in the Twin Peaks costume contest!

Strange things are bound to happen during a Twin Peaks costume contest, but nobody, and certainly not the celebrity judging panel, was expecting this. A mysterious “blind owl” was chaperoned right in front of the special guests, where he signaled them to take off his owl mask (since his hands were wings at first). Removing the mask, Jonny Leppell (who played Pierre Chalfont in Twin Peaks: Fire Walk with Me) revealed a character called The Chevron Man. This mysterious person continued his performance by opening his zipper to reveal a red, silk handkerchief. It took a few gasps from the crowd and several x-rated gestures, but finally someone took the bait…

Kimmy Robertson pulled a red, silk handkerchief out of the The Blind Owl/The Chevron Man’s zipper before he pulled out an actual log out of his trousers.
—Ernest Worthing

I have a feeling we’ll see even more of The Chevron Man… whether we want to or not! 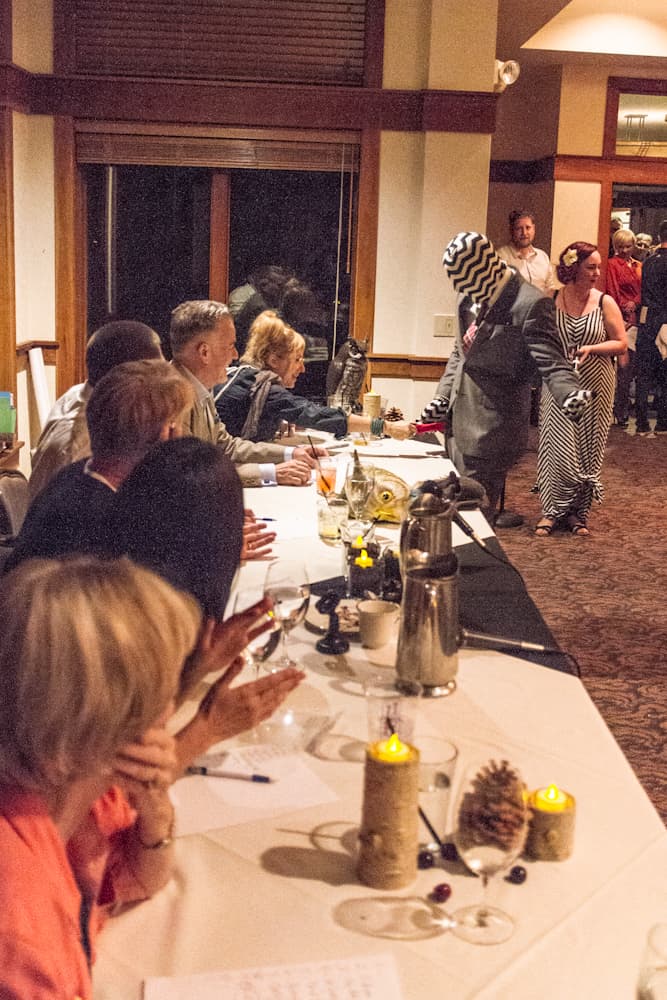 When you’re in Twin Peaks…

This guy all dressed in white on a monocycle… in the middle of the night… around Sparkwood & 21… Too freaky to stop the car. Should I mention I DON’T DRINK? At all.
—David Introligator

7. And a Killer BOB sighting

We barely escaped from BOB while parked at the Twin Peaks sign location.
—Brad Payne 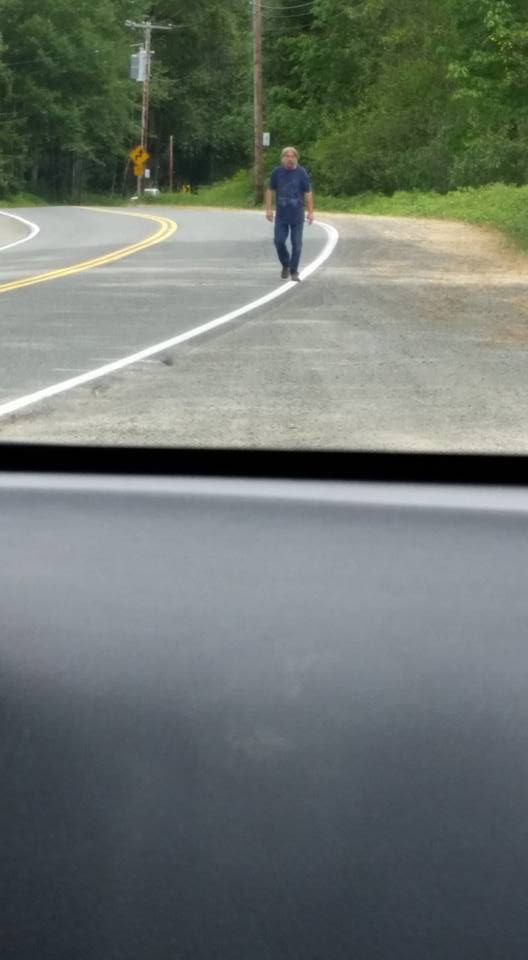 Lucy and Dick kept the baby, but it didn’t turn out so well.
—Vinnie Guidera 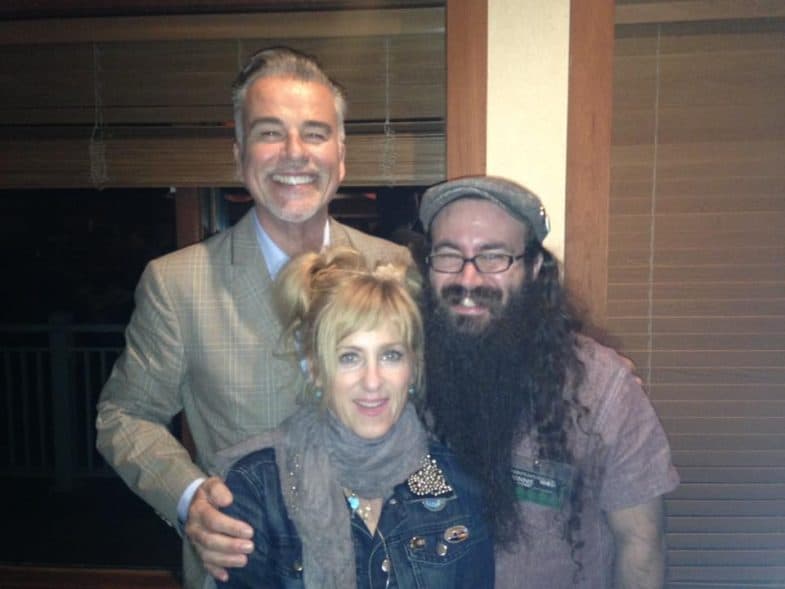 Kimmy Robertson insisted I signed my own pic from last year after she signed it… classic!
—Murray Wasylnuk 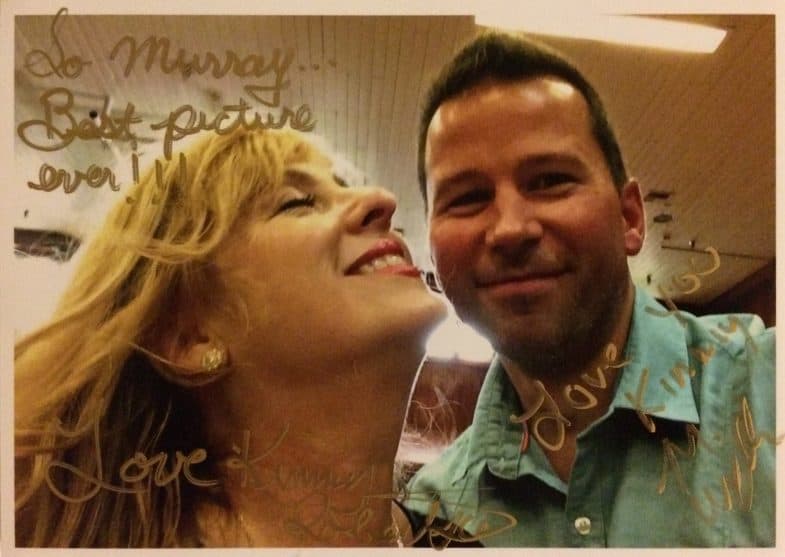 Unsurprisingly, a lot of crazy memories involve Kimmy Robertson. Irina Schaffer (dressed as the Log Lady) remembers Kimmy helping her find her poor stoned husband (dressed as Dr. Jacoby) by yelling into the darkness: “DANIEL! ARE YOU HIGH? WHERE ARE YOU?”

That same evening, Adrienne Dee-Olsen spotted Dr. Jacoby, the Log Lady, Nadine and Ed Hurley, and the Man from Another Place dancing around a tiny little light out behind the country club.

11. Dorothy Vallens singing at the Roadhouse

Leland Palmer Karaoke Night got cancelled due to rain, but that didn’t keep Dorothy Vallens from showing up at the Roadhouse and breaking out into a song from Verdi’s La Traviata. Later, she even started singing Bobby Vinton’s Blue Velvet for a select audience. A highlight for many attendees, including Janet Clemons, who, together with her husband, had encouraged Dorothy to come dressed for the part.

Thanks to Adriano Emi for the photos. 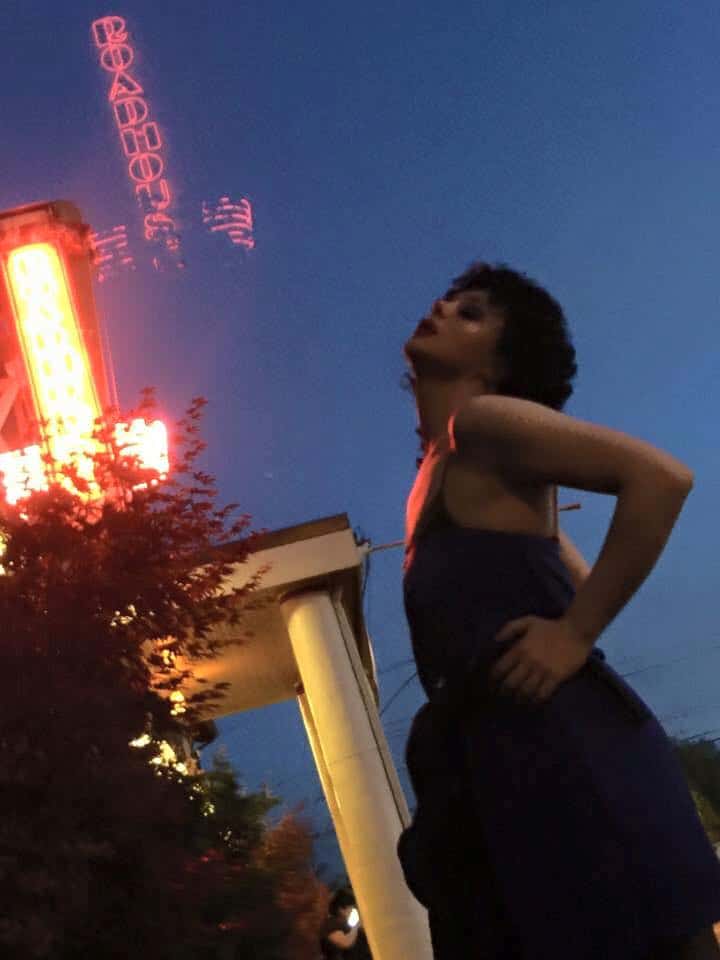 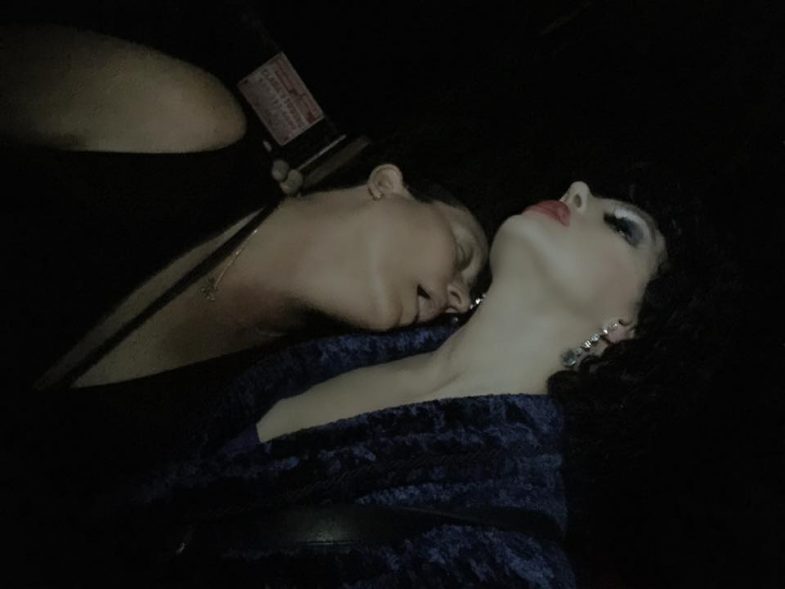 And last but not least… this!

It was a huge thrill to have Charlotte Stewart hold Spike and that look on her face was priceless! I actually made the baby. He’s sculpey clay and paper mache. Then of course painted and wrapped with gauze. It was one of those projects that I just decided to do a few years back. Since then he’s been a prop for Black Lodge Burlesque from Portland and Seattle.
—Jason Mattson 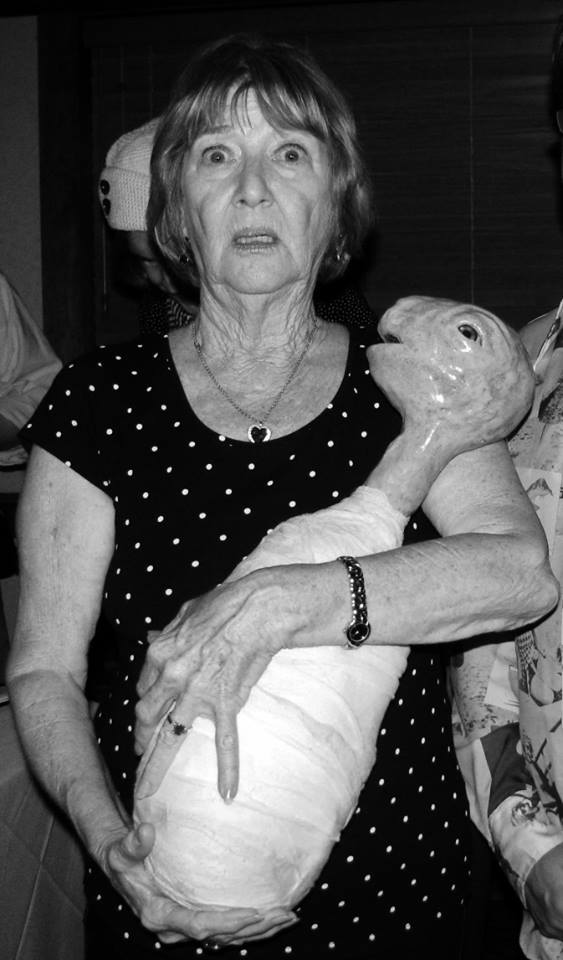 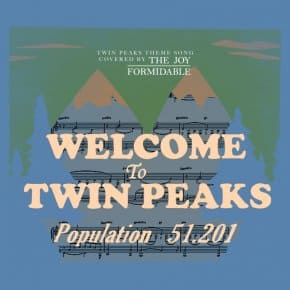 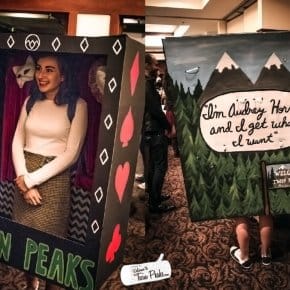