They went by many different nicknames since two isolated apparitions in Buckhorn, but after Part 8, the bearded, charcoal-covered bums in black who hang out in jail cells, morgues, and around The Convenience Store, can be officially called “woodsmen.” 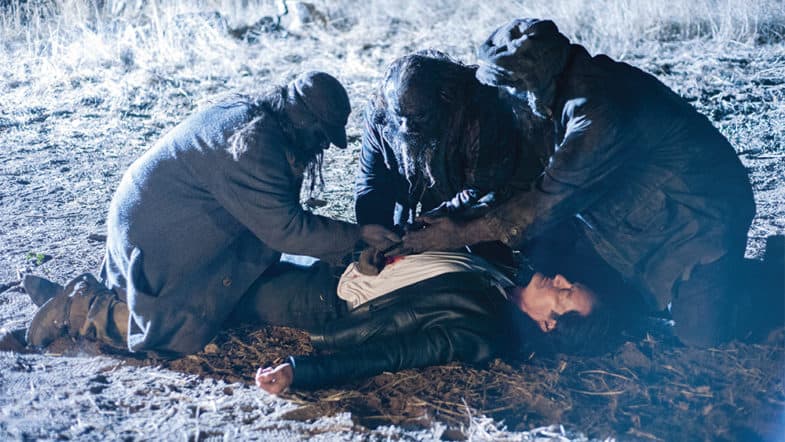 A gang of them descends from pure air to, I guess, ‘heal’ Mr. C after being shot by Ray Monroe. By dancing, digging in the dirt around him, and rubbing blood all over Cooper’s doppelgänger’s face, they seem to increase or strengthen Killer BOB’s presence. The minimal yet haunting score for that scene was not listed in Part 8’s end credits, and it sounded unlike anything else used in the series so far.

But if you speed up the soundtrack like Taylor Murphy did, you’ll discover the music is in fact very familiar. It’s a part taken from the first movement of Ludwig van Beethoven’s famous “Piano Sonata No. 14,” only seriously slowed down. The scene’s closing shot of the moon could be a hint, as the 1801 composition is popularly known as “Moonlight Sonata.”

UPDATE: As noted by Shaun and Brittyn, Ray’s screaming towards the end sure does sound like a monkey screeching! Any relation to the monkey saying “Judy?”

David Lynch previously slowed down American Woman by Muddy Magnolias for a scene in Part 1, but here he’s doing it way more drastically with Beethoven’s sonata. In an effort to recreate the music without Ray’s screaming, I took the original and stretched it 500%. Not quite the same, so let’s hope David Lynch’s edit will be included on the upcoming Twin Peaks soundtrack (Amazon).

And remember, the cow jumped over the moon.

Hat tip to Coz Baldwin.

UPDATE (2018): In an interview with Variety, sound supervisor Dean Hurley explained the choice of music.

[David Lynch] said he’s always loved Vladimir Horowitz’s rendition of ‘Moonlight Sonata’ — ‘Give me “Moonlight Sonata” slowed down two times and two octaves down.’ I’ve always felt like it was the one singular thing that you can do to a piece of audio in one fell swoop to totally change it completely. … Sonically, that scene is just super-restrained and simple, but the crux of it is all David. It’s just all built around this vibe of that slowed-down ‘Moonlight Sonata.’”