“I couldn’t be more excited to share with you my cover of the Twin Peaks Theme written by Angelo Badalamenti,” Sarah Lipstate writes on Instagram. Taking a seat in Agent Cooper’s screen-used chair together with her Fender American Series Jazzmaster, the L.A.-based guitarist and filmmaker performs an instrumental that would make Audrey Horne’s palms itch. If the video had closed captions, they would say [intense ethereal reverberations]. “To sit in Agent Dale Cooper’s chair and perform this song was beyond the beyond,” she continues.

Lipstate, who toured as a member of Iggy Pop’s band and records under the name Noveller, teamed up with her partner, actor and director George Griffith, to shoot a Twin Peaks-themed video for this cover. They traveled to Washington state to film inside Jason Mattson’s meticulous Red Room recreation, which the couple discovered thanks to Jason’s article on Welcome to Twin Peaks. Griffith, as that f***er Ray Monroe, was one of the very few new cast members who made an appearance in the actual Red Room in the 3rd season of Twin Peaks.

Released exclusively for Bandcamp Friday, the Twin Peaks Theme is backed with a Red Room remix that’s definitely worth checking out too. Digital download and a limited number of records are available at noveller.bandcamp.com. 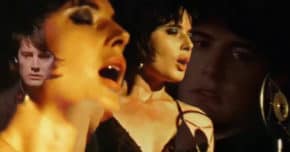