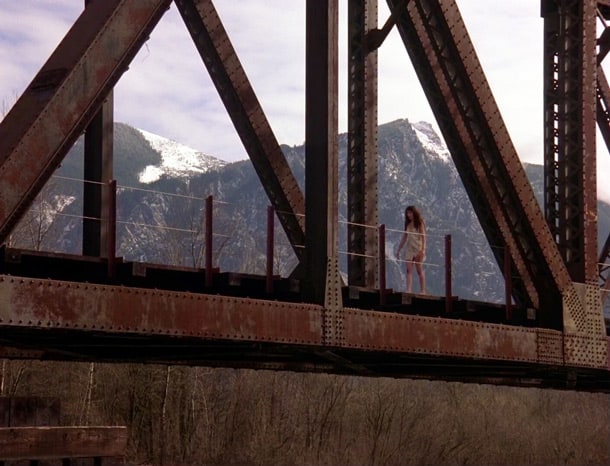 A suspicious fire broke out today on Reinig Bridge, the trestle bridge better known to Twin Peaks fans as Ronette’s Bridge. Shortly before 5 PM on May 27, 2014, witnesses saw vertical black smoke in the area of Meadowbrook Way, Reinig Road and 396th Drive in the downtown Snoqualmie, WA area.

Snoqualmie Fire Chief, Mark Corriera, told Living Snoqualmie that the end of the walking bridge was on fire when crews arrived. Firefighters “deployed master streams to extinguish the creosote and lumber that was burning.” The fire chief said a suspect is in custody as the fire was believed to be arson.

The bridge, which has Twin Peaks references scribbled all over, is obviously a popular spot among Twin Peaks fans and one of the stops on the yearly Twin Peaks Fest bus tour.

This isn’t the first time a Twin Peaks filming location gets engulfed in flames. Most of the interior of the Double R Diner was destroyed when an arsonist took down Twede’s Cafe (formerly Mar-T-Cafe) in 2000.

Thanks to Seppio for sharing the news.

Suspicious Fire At Twin Peaks Filming Location, Ronette's Bridge is more popular than Uncle's Day at One Eyed Jack's with 1042 shares on Facebook
Spread the word and share