This tweet by @jekelish sums it up nicely: “I can’t wait until next week’s season finale of The Killing so I can finally learn who killed Laura Palmer“.

When I watched it a few months ago, I noticed some similarities between Twin Peaks and the original Danish series (“Forbrydelsen”) that AMC’s The Killing was based on (especially the moment when the parents find out their daughter was murdered). But the writers of the American remake drew even more parallels by adding the videotape’s “reflection” clue, and lately even a One-Eyed Jack’s kind of casino (“Wapi Eagle Casino”) and a history of prostitution (at “Beau Soleil”) to the storyline. 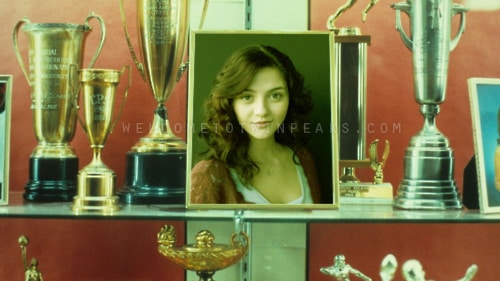 In an interview with Michelle Forbes, who plays Rosie’s grieving mother, she agrees there are quite some resemblances between The Killing and one of her personal favorite series, Twin Peaks.

You know, it’s really interesting — I mentioned earlier, I did have a show in Canada, “Durham County,” which was also compared to “Twin Peaks” and it was also compared to “The Killing” in the NY Times because it was more of a character study than a police procedural and very beautiful to look at and very broody, and that was also compared to “Twin Peaks.” And I never understood the comparison, and on this one, I tended to sort of pooh-pooh that initially, but I am understanding how deeply similar it was. In fact, somebody sent me a scene where Laura Palmer’s parents discover their child’s death and it’s shockingly similar. so there are a few similarities, but I don’t know how ‘Twin Peaks’ goes by way of Denmark 20 years later and comes back to AMC, I’m still trying to understand, but I think the similarities are fairly intense.

I was a massive fan of Twin Peaks. Massive. I dont know how any of us grew up in this age of television and weren’t astounded, and saying that, I’m still shocked that that was on network television. I was just watching it 6 months ago and there’s this little scene with Kyle MacLachlan is with somebody, in this little room having dialogue, and this marching band just goes walking past, and I just thought, “How did — this is so David Lynch, it’s so insane, and it’s so insane that it was on network television 20 years ago.” I can’t imagine it getting through today, I don’t know how it happened, but I’m so glad it did. And it changed television.

But two decades had passed and I didn’t see it. I think it was when I saw the one sheet for the show and it was ‘Who Killed Rosie Larsen?” and it was so similar to “Who Killed Laura Palmer?” And so yes, initially I missed it, but now I see the similarities are intense.

Now don’t expect it to be a modern-day Lynch/Frost production, because The Killing is completely different in every other way. I just wish the writers would fess up so it becomes a homage instead of a ripoff.

» I’ve also found an excellent episode-by-episode comparison between Forbrydelsen and The Killing here.