As many of you have discovered by now, one of the most intriguing clues hidden on Bill Hastings’ The Search for The Zone appears up when you hover over the area beneath the website awards at the bottom of the page.

Coordinates! Major Briggs was looking for them. Mr. C still is.

WARNING: These are the coordinates to private property (currently up for sale) and the owner is kindly requesting Twin Peaks fans and reporters to stop trespassing. Please be considerate and stop searching for the Zone.

UPDATE: An official statement from Rhino, who commissioned the website:

These coordinates were intended to relate to the fictitious geography of the series and not reality.  They were only chosen to represent a geographic neighborly relationship to the show’s fictitious ‘Buckhorn South Dakota.’ While Buckhorn is fictitious, in the show it’s given a locale on a map and this was meant purely to expand upon that relationship.

We did not expect that fans would venture out and disturb landowners and ask that they cease this activity immediately.  The coordinates were strictly meant to expand upon the accuracy of the fictitious world of the show in geographic terms, since actual coordinates play a thematic role in the show.

The longitude and latitude is being removed from the website effective immediately.

Click the coordinates and a video showing what looks like The Convenience Store from Part 8 starts playing.

Enter them in Google and the pin drops at a place near Spearfish, SD.

When somebody on Twitter asked Mark Frost if it would be safe to visit this location, the Twin Peaks co-creator answered…

Of course, somebody already did and saved you a trip the Black Hills of South Dakota.

With the help of Alec McDowell, an intrigued local going by pastrypantry on Reddit drove out to the exact spot on Monday. What follows is his written report, along with photos that he uploaded to imgur.

At first, I parked on the gravel road shortly after speaking with a woman who lives nearby. She gave her permission for me to inspect. This is a great relief as I am a member of the Oglala Lakota tribe and to put it bluntly, a significant portion of the population in and around the Black Hills “don’t take kindly to folks like me in these parts.” 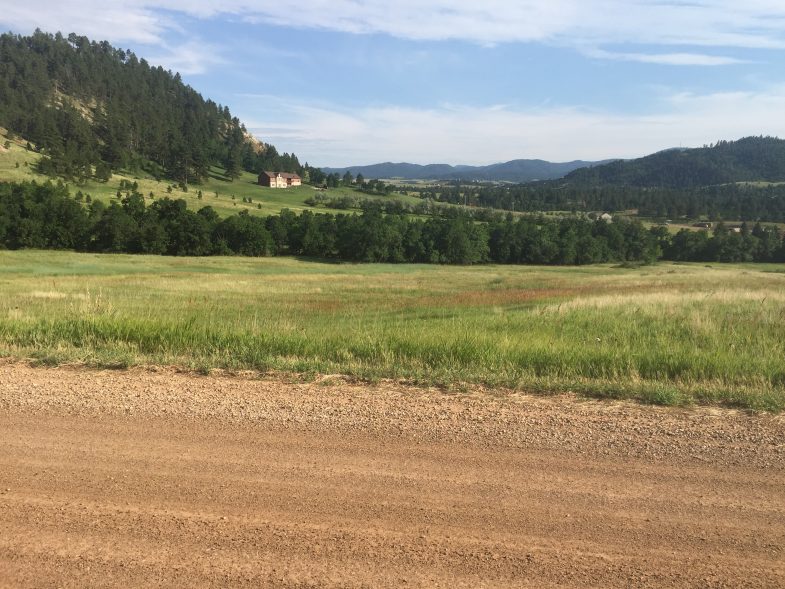 About 50 meters WSW (246 degrees) from the coordinates is an old ditch, roughly 20 meters in length situated NE/SW but it is vegetated throughout. In other words, no recent activity. Upon inspection, at the NE end of the ditch, there are old pieces of lumber with small nails imbedded. The nails are quite rusty, not of modern design. 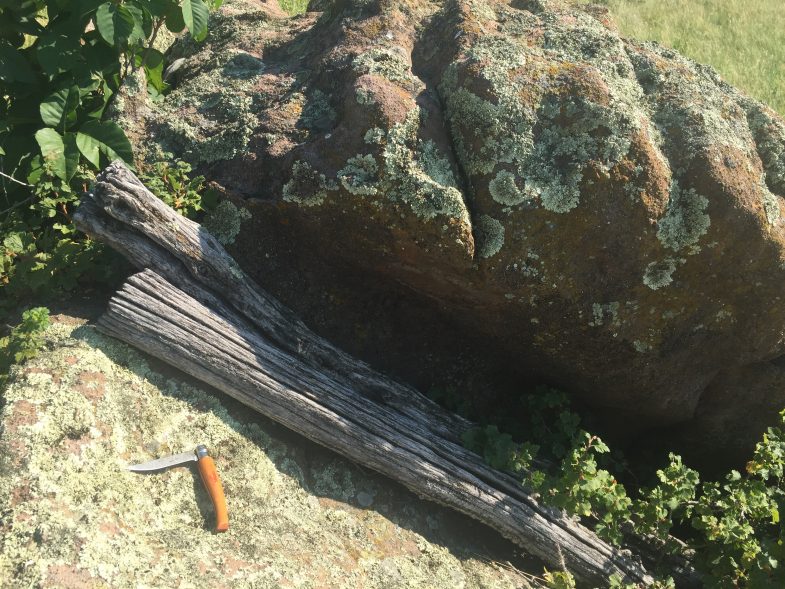 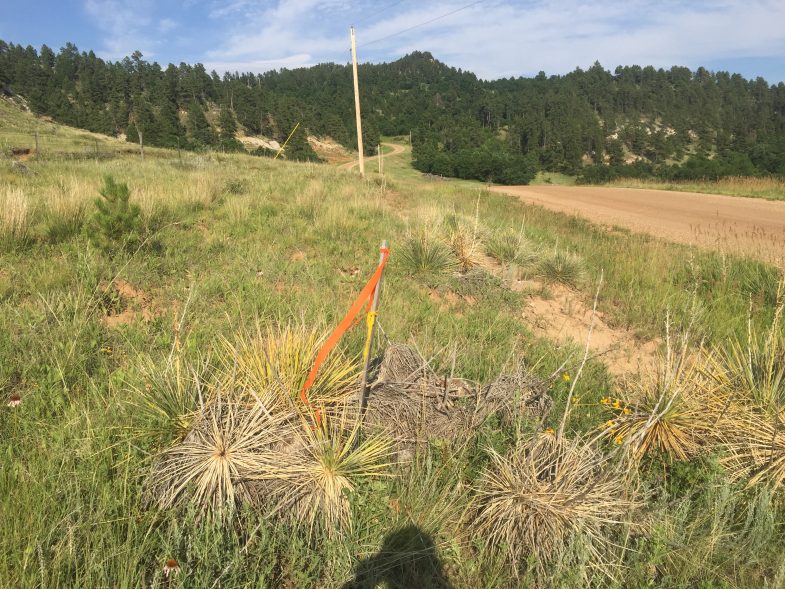 There were tire tracks directly through the spot the coordinates indicated, so it would not surprise me if someone else got to whatever it was. 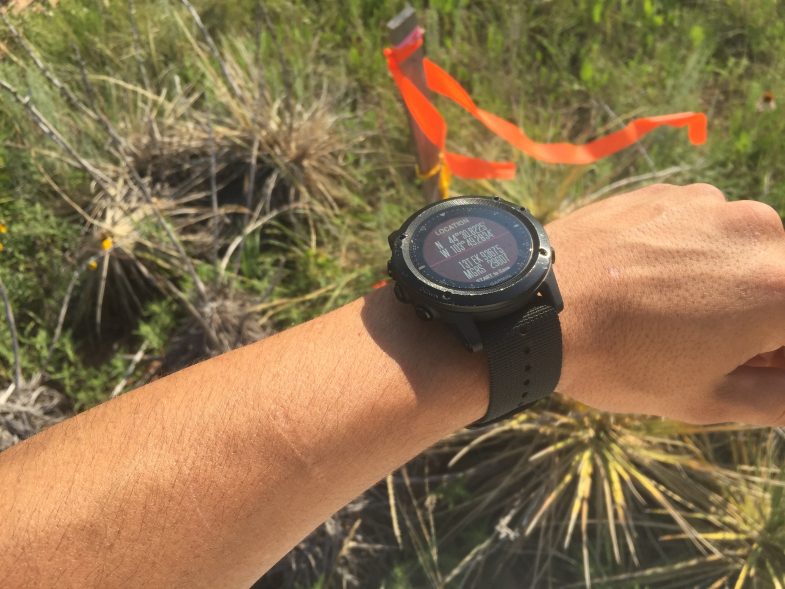 The rusted object was found at the E (and most obviously excavated) side of the old ditch the lid to rectangular tin can not unlike the size of a can of spam. Also, I believe it had a bullet hole in it. Fairly well imbedded in the ground, though. Perhaps it’s been buried for… 25 years? 😛 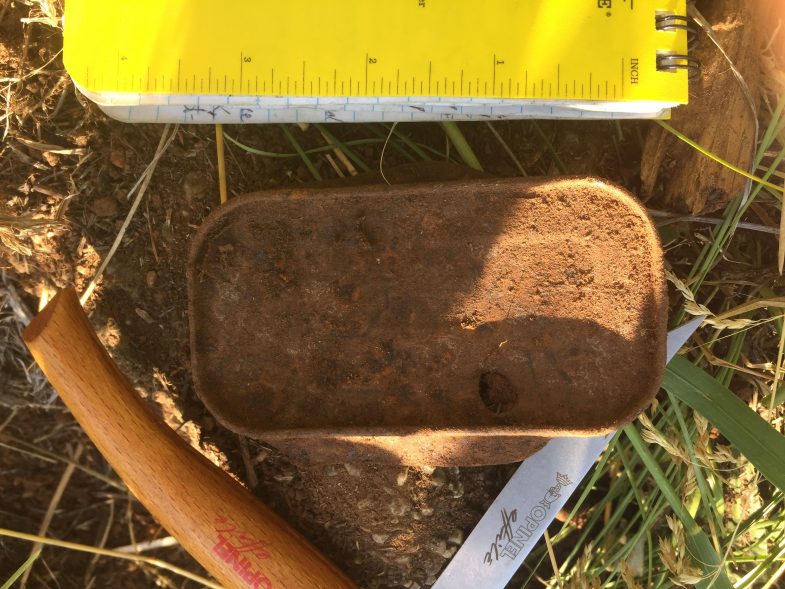 Made aware of the Native American influence on the mythology of Twin Peaks, the explorer responded:

Considering that I am Lakota, it has been a fortuitous and exciting day, albeit a little disappointing. On the drive up to Spearfish (I live in Black Hawk and work in RC) my mind wandered towards all manner of possibilities. Maybe they’re filming a scene out there right now? What if Mr. Lynch himself is awaiting the first person to show to award them some strange and fantastic prize?

Tonight I realized that perhaps it’s possible to draw a straight line from the spot looking WNW toward Lookout Mountain and Crow Peak and on across the continent to the namesake Twin Peaks of our favorite show.

That Crow Peak is named after a battle that took place between my people and the Crow (who call themselves either Absarokee or Absolugee). The name Lookout Mountain precedes European settlement and retains its original title translated to English. It was a strategic high point for looking out in all directions across the prairie.

In conclusion, there doesn’t seem to be anything going on at this location in the real world. But then why are the coordinates mentioned on The Search for the Zone?

Earlier this week, the site’s visitor counter turned into a countdown showing the minutes left until the day of the series finale, September 3rd. Maybe Rhino, the record label behind the upcoming Twin Peaks soundtracks that also commissioned the site, has something in store for us on that day and at that location?

Unless the tire tracks are indeed a sign somebody beat pastypantry to it. In that case, will this person please stop hybernating and share their findings?