UPDATE: This event will be broadcast on AXS TV early 2016, and an album release is being considered. Stay tuned for more details.

The event takes place at The Theatre at the Ace Hotel in L.A. in honor of the 10th anniversary of the David Lynch Foundation.

Be it the synthesized echo of the Twin Peaks theme song, the Angelo Badalamenti score to Blue Velvet or Mulholland Drive‘s “Llorando,” David Lynch deploys music in his work to stirring effect, creating layers of meanings in a sequence of melancholic minor chords or startled key changes. On April 1, the David Lynch Foundation celebrates its 10th Anniversary with The Music of David Lynch, an exploration of the director’s use of immersive and ambient sound in his films, Twin Peaks and original catalog. All proceeds benefit the non-profit Foundation to bring Transcendental Meditation to at-risk populations suffering with PTSD.

Tickets range from $45 (rear balcony) to $1000 (VIP) for the best seats in the house including a private pre-concert event with David Lynch, top shelf cocktails and crafted hors d’oeuvres, and a limited edition concert poster designed by Shepard Fairey.

You can now purchase tickets for The Music of David Lynch in Los Angeles.  Reserved seating is sold out and only VIP tickets are left, but there are still some on eBay!

Here’s who we know will sing what (so far):

If you cannot make it, why don’t you retweet the following message to request a live stream of the musical event of a lifetime!

Retweet to request a LIVE STREAM of “The Music of David Lynch” with Angelo Badalamenti & others: http://t.co/iSKOoV6qfn /cc @LynchFoundation 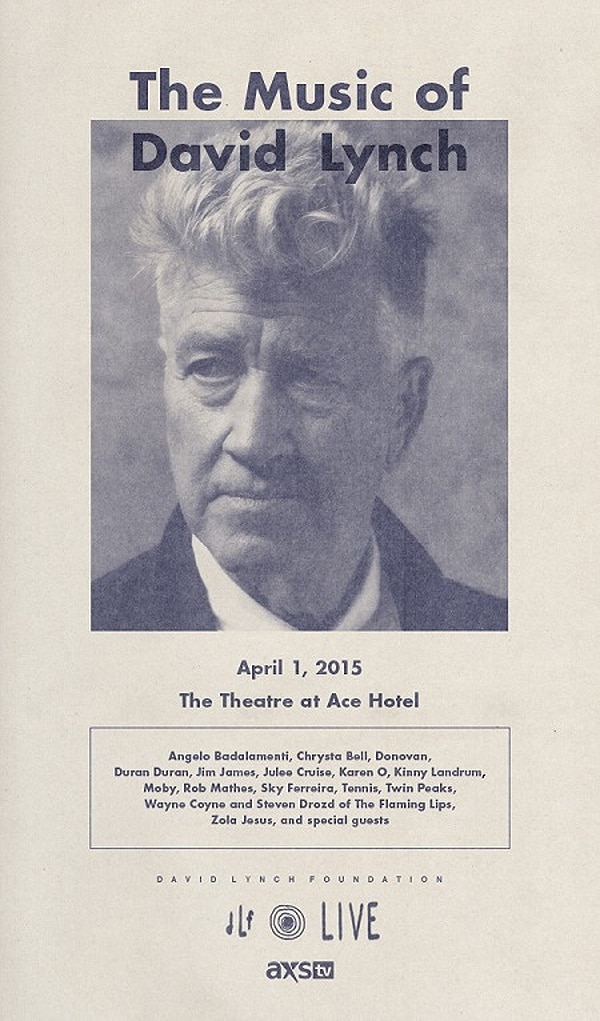