It had been about 15 years since Dana Ashbrook last saw Twin Peaks: Fire Walk With Me, and he couldn’t recall ever seeing it in all its glory on the big screen. Needless to say, the audience was pretty excited to take a trip down memory lane and watch the first of five sold-out 35mm screenings at 92YTribeca together with the San Diego-born actor, especially when afterwards, Dana took a chair in front of the 71 other attendees and talked a bit about playing the character of Bobby Briggs two decades ago. Here’s my recap of the Q&A on February 24 2012, as well as some of the photos I shot. 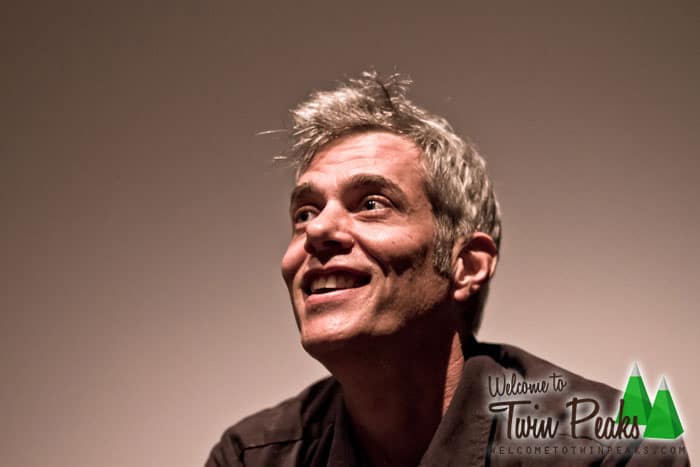 How long was the period between the production of the last episode and the movie, and what was it like to come back into this role?

DANA ASHBROOK: I think it was about a year. We were gonna do the movie, and then the money didn’t happen but they kept trying to do it. Eventually it happened and I know that Kyle played a big part in it being made. So I guess it was a year.

It was really weird. The first scene that I shot was the last scene that we see, with Laura and me on the couch. I came straight from another job, literally flew in and went straight the set. I didn’t know what I was doing, so David kinda walked me through the scene line by line. I remember David, Sheryl and I sat around and we rekindled with everybody. I was happy; they were my great friends and they wrote a good part for me there.

What was your favorite scene?

DA: I really like that scene in the woods. It was one of my favorite scenes in the entire thing, including the series. We were just watching, I was sitting next to my girlfriend and she said: “Wow, Sheryl is so annoying in this scene.” And she was. I remember her being annoying while filming. It was late at night, it was cold. It was an amazing kind of scene and she really did go for being one of those people that are so out of control drunk that you can not get them to sober up. I really noticed that, watching it this time. Sheryl was doing things like putting her finger in my ear, and I said “Stop it!“. She just did that stuff. It was all her and not scripted. How did you get involved in Twin Peaks?

DA: It was really just dumb luck. I happened to know Johanna Ray, the casting director for the pilot. She used to cast Amazing Stories, this TV show by Spielberg. I never got on it, but I used to audition for it a lot when I was 18 and first came to L.A. So later she was casting Twin Peaks and literally showed my picture to David Lynch and that was it.

I remember the first meeting with David Lynch clearly. I loved the script when I read it. Eric Da Re, Johanna’s son who played Leo Johnson and who was also running the casting session, started talking to me about the script, saying that it was so crazy with the woman with the eye patch and the drapes and all that. I agreed that it was so crazy, so funny and I hadn’t read anything like it. I then told Mark and David that I loved it. “Love the thing with the eye patch.” They laughed. They enjoyed that I enjoyed it, and that was it.

I went back and had a work session with David and a girl, and we read the “Happy hour in France” scene from the pilot. We practiced that scene a few times and then we had a test. Usually, you have to test against a bunch of other people, but for this particular job it was just one person for every part. Everybody was there, Sherilyn, James and Lara Flynn.

Can you talk a little bit about the development of Bobby’s infamous walk?

DA: Well, you know. In the movie, we were dancing around and all that. The music was really playing, and there was a bunch of extras dancing around. The walk itself was just clunky, I don’t know. I was wearing tight boots. And the whole going backwards thing… I remember on the pilot, David wanted me to walk backwards. And when I got to the door, I wanted to turn around and enter the normal way, but he wanted me to do that backwards too. 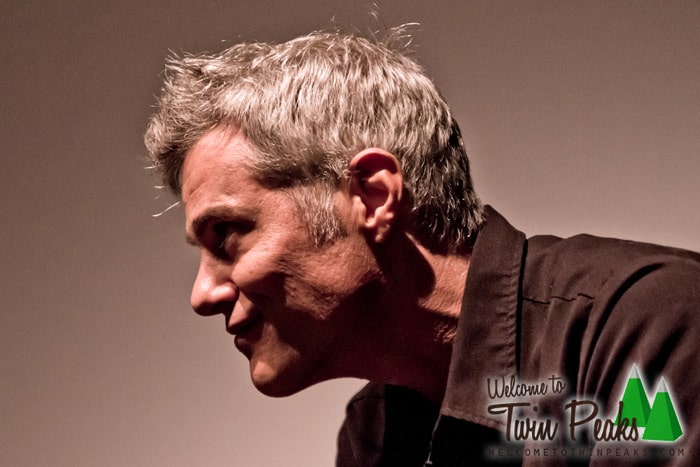 One of the most memorable moments with Bobby Briggs is when his father, Major Briggs, tells him about the dream he had. How did you experience the filming of this scene?

DA: That was actually written with Bobby not going either way emotionally. I went to Mark Frost and he said: “No, Bobby is not into it and he’s just irritated by his dad.” And I was like, oh okay, I get it. And then when we got on the set, David was like: “No, no, no! It’s completely the opposite.” (laughs)

We did Don’s lines first. I was just listening to the story that he was doing and he was so good. And then they turned around on me, and David wanted me to cry but it wasn’t really working. And instead of talking to me, David took Don aside and he talked to him. Don came back and while we did the scene, Don started crying off-camera. When he started crying, I started crying. I really love Don for that, God rest his soul.

Without the soundtrack and effects, did you feel there was still a weird intensity on the set?

DA: Yeah, there’s a weirdness. But David listens to music while watching the monitors. He’s got a whole vibe going, and he’ll put that music out there for everyone to vibe on too.

It can get weird. With the scene in the woods where I shot the guy in the middle of the night, they had effects guys doing all the brains. But David Lynch got in there with rubber gloves on and he wanted to do the brains. It’s like an awful thing, but it’s funny too, seeing David mess with a brain.

It was a learning experience working with someone like that. He’s so fun to work with. The only time I saw him get mad was when we shot the scene when Mike and I were in the woods with Leo, and Leo throws the football on the car. I was supposed to have my car, which was a Barracuda, but they didn’t have it. They had a black Trans-Am for me and David was like: “Where the hell is the car? This is Los Angeles, they have every car in the world!” But they couldn’t get it, so we had to use the Trans-Am. He cared so much, he was the best. 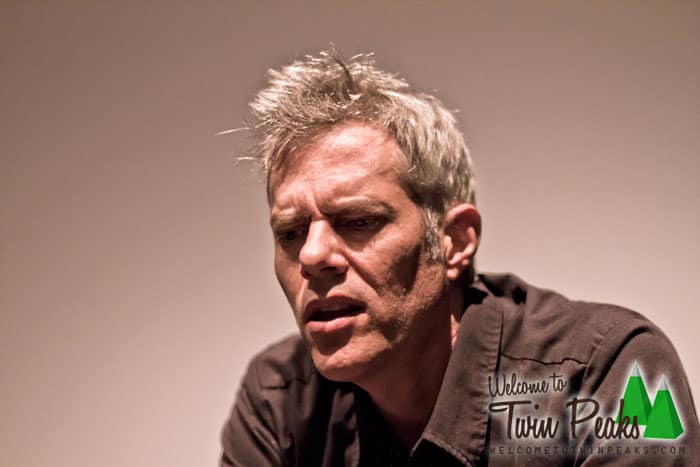 How much did the cast discuss the show?

DA: Like everybody, we all thought about it. But it wasn’t really that big of a deal to us, as much as it became after ABC marketed Twin Peaks with: “Who killed Laura Palmer?” I was more into the story of all the freaky characters.

We were really lucky to have good writing and directors. And they were there to guide us if we had any questions. Some of the stuff, you’re kind of winging. When David Lynch was there, you could go to the source, but if that source wasn’t there, we were making arbitrary decisions character-wise. But most of the time, it’s pretty much mapped out and you just have to do what the script says.

David likes the mystery of things, and sometimes it’s easier not to try to understand what’s going on. He meditates a lot and comes up with stuff while doing that. I just didn’t question it that much. As an actor you hope to meet someone in your life that you just trust, that tells you to run backwards through a door, or to dance with a blue rose and do stuff (laughs). I don’t know what she [Kimberly Ann Cole who played Lil the Dancer] must’ve been thinking. 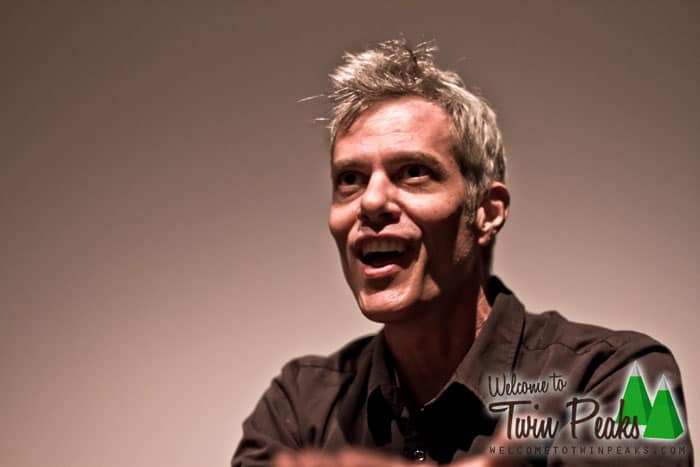 How was it like to appear on Donahue and Letterman?

DA: Appearing on Donahue was amazing for me, because he was someone I grew up with watching. It was a real trip. It was surreal. And Letterman was my first trip to New York. I was 22, got out at 30 Rockefeller center and looked up and almost fell backwards because it was so high. The limo driver stopped me from falling and I felt like such a country bumpkin.

Do you remember how David directed the jail scene in the pilot, when they bring in James?

DA: David wanted to find some sort of intimidating thing to do in there and we were working in this weird place. He took me on the side roof of the building and we were out in the snow trying different sorts of sounds. And you know in high school basketball and football games, you do this “Woo-woo-woo!” thing with friends that is annoying, so that’s where it came from. Then some guy that owned the building came out and told us to get off the roof. (laughs) 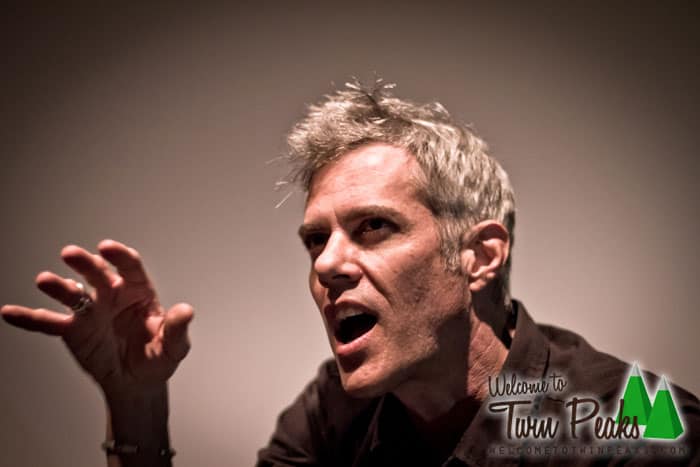 One last question. Are you still in touch with any of the other cast members?

DA: Yeah, I’m in touch with a few of them. We just did a tribute episode, Psych, because the guy who is the lead is a huge Twin Peaks fan and a friend of mine. So Sheryl, Lenny Von Dohlen, Sherilyn, Ray… who I love, I’ve worked with Ray more than anyone, 4 times since Twin Peaks, he’s the best. And I love them all!

While being applauded by the audience, Dana Ashbrook wandered out of the screening room, intentionally or not, with that typical Bobby Briggs walk and disappeared into the night. Thanks to 92YTribeca for tracking down the beautiful 35mm print of Twin Peaks: Fire Walk With Me and giving it a proper tribute! 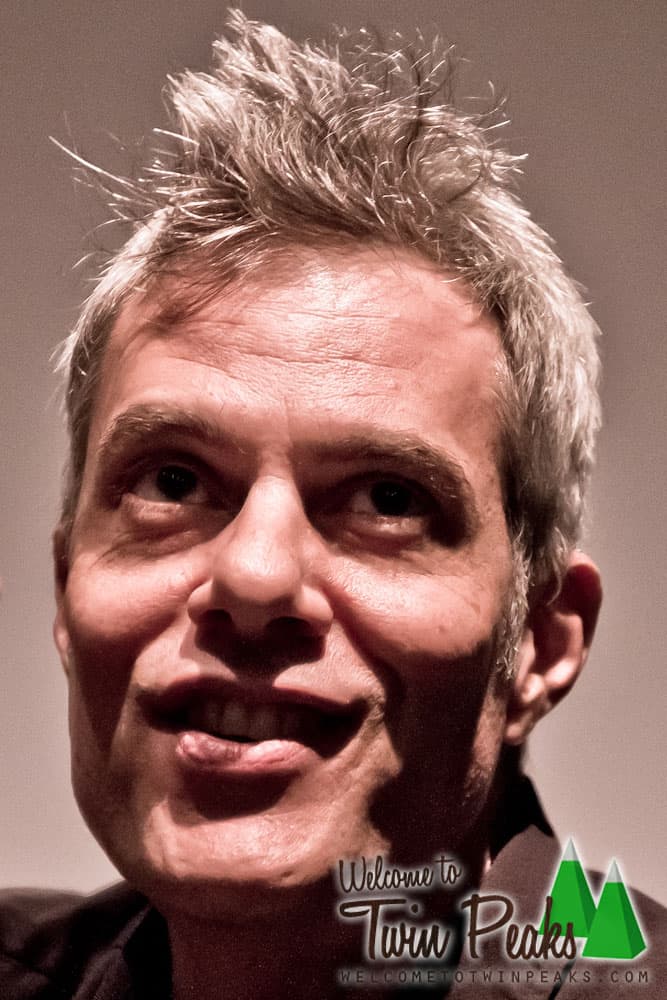