“There are some things in this universe, ladies and gentlemen, that are bigger than all of us… and a tortoise is one of them!”
—Howard (played by David Lynch) 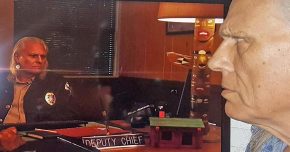