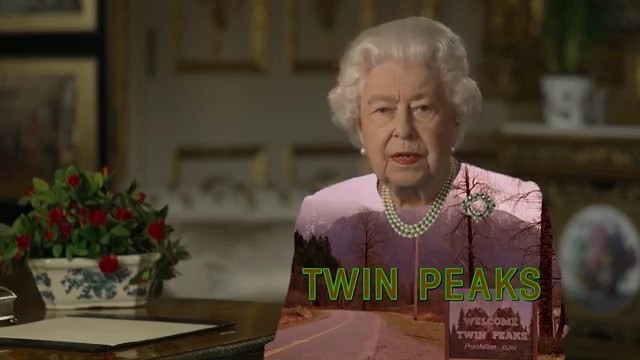 In her rare and widely lauded televised address to the nation, one of the world’s most eminent Twin Peaks fans, Queen Elizabeth II, took some time to thank her fellow fans for staying at home binge-watching the now 30-year-old show.

A special message from Queen Elizabeth II to those of you staying at home and binging Twin Peaks. #TwinPeaks pic.twitter.com/awFYJUrwTV

OK, so that’s not exactly what happened, but a huge thanks to Gabriele Achilli for making perfect use of the Queen’s ‘green screen’ dress she wore during her “We will succeed” Coronavirus speech.

It wouldn’t be that far of a stretch though. We know from Paul McCartney by way of Angelo Badalamenti that Her Majesty The Queen was a die-hard Twin Peaks fan during its original run in the ’90s. In fact, the Crown was so glued to the show that she preferred a new episode over a live Paul McCartney performance at her home.

Here’s the story as famously recounted by Angelo Badalamenti: