The fan fiction below was written by Dustin Harrell and submitted to Twin Peaks: The Fan Dossier, a writing contest hosted by Welcome to Twin Peaks with the support of Flatiron Books and Mark Frost. A new entry is shared every Fan Fiction Friday.

In a town like Twin Peaks, where everyone knows everyone and everyone’s business, it’s easy to spot some of the lesser known people associated with Laura Palmer prior to her death. I heavily considered redacting this file from my final report or even writing it at all seeing as how little relevance it had pertaining to our investigation but in the interest of full disclosure I have retained it here.

Constance Pomeroy was born in Twin Peaks to Gevena and Howard Pomeroy on January 11th, 1972, their only child. Little information is available on her in the town’s official populace records other than her attendance in the public school district and yearbook photos in the high school’s library archive. Now Chief, I know you’re probably wondering why the hell I even took an interest in Constance and I promise you- I’m getting there.

Constance’s bare bones files in the schools register shows a very bright student with little to no extracurricular activities. I spoke to George Wolchezk, the now retired and former principal of Twin Peaks High School who remarked nothing of memory of the girl when he gladly invited me into his home to aid in our ongoing field report. I think, if I may Chief, assess that he was just grateful for someone to speak to having never married or produced children of his own. Remarked nothing that is until I brought up Laura Palmer and the effect the news had on the school the day Sheriff Harry Truman arrived to deliver the news and interrogate Bobby Briggs. You see, Constance had overheard one of the many gossiping secretaries speaking about the sudden death and apparent murder of ‘the Palmer girl’ (his words, Chief) and fled from the office in a fury of distraught panic. She was heard screaming through the school’s quad not moments before George delivered the news. A moment, he remarked, that shook the school for months to come.

Constance seemingly did not know nor had ever spoken to Laura. Save for a moment of emotional duress, nothing seems to link them to explain why she was so visibly (and audibly) shaken by the news. I reached out to her parents but records indicate that her parents divorced in ’89. Gevena passed away in 2007 from heart complications and her father moved out of the area several years prior. Constance lives a few miles from town in a remote mobile home with her adoptive daughter, unmarried, but declined my request for a non-mandatory inquiry for the purposes of this dossier.

The most recent and only on record comment regarding Constance came from a local police report filed by Bobby Briggs regarding an incident she was indirectly witness to. Constance was present at the scene of a possible shooting which, according to the report, involved an out-of-state family traveling through town near the Double R when a handgun inside the vehicle was picked up by the couple son’s and was accidentally fired. No one was harmed and property damage was minor. While addressing the situation, other witnesses mentioned Constance and her daughter, sick and vomiting at the time according to the report, were traveling behind the family as the gun went off resulting in a traffic stand still. She was notably agitated, Briggs noted. Continuously honking her car horn and remarking her need to be home for dinner. Briggs stated that while irrelevant to the incident, he found the situation “odd.”

Speaking of ‘odd’ this, Chief, is where things get strange. After reviewing the report I took it upon myself to speak to Briggs about the incident and what exactly led to Constance’s inclusion but… he had no memory of filing the report or let alone the incident itself. 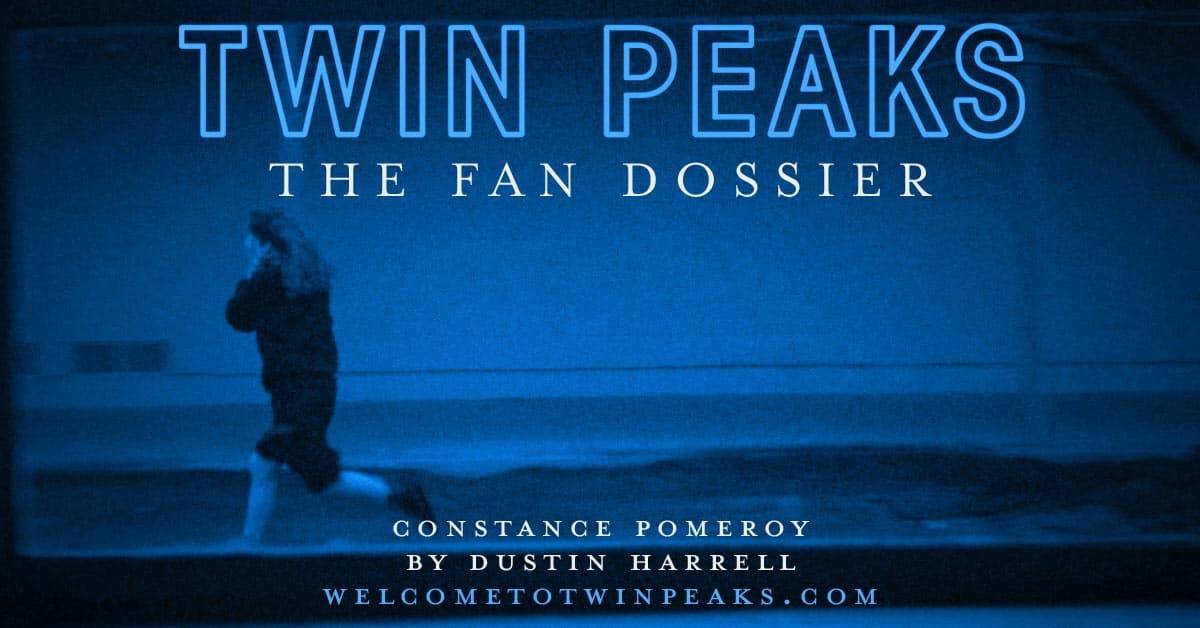 The Fan Dossier: The Screaming Twin Peaks High School Student is more popular than Uncle's Day at One Eyed Jack's with 119 shares on Facebook
Spread the word and share