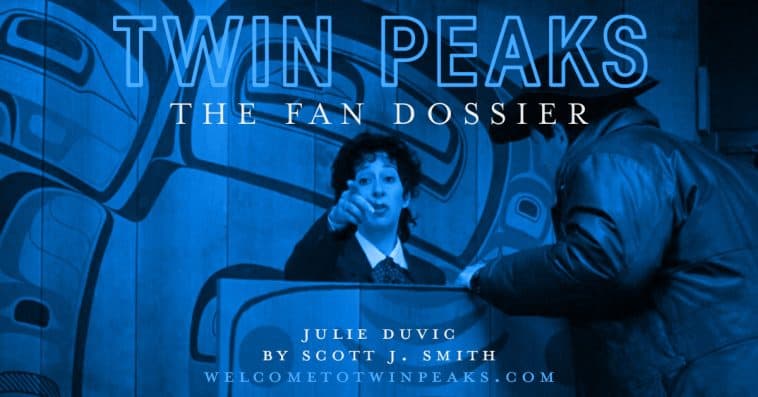 The fan fiction below was written by Scott J. Smith and submitted to Twin Peaks: The Fan Dossier, a writing contest hosted by Welcome to Twin Peaks with the support of Flatiron Books and Mark Frost. A new entry is shared every Fan Fiction Friday.

This story is published in memory of Diane Caldwell.

In order to exercise due diligence, I contacted many current and former employees of Horne Enterprises who may have witnessed more than they initially realized under the employ of Benjamin Horne. The basis of these investigations stemmed from the well-documented odd behaviors of the Horne family (noted in Case 008-072-0119, Bureau File TP-02/18) and the strange goings-on at the hotel. The employees interviewed ranged from those who worked at the hotel, Horne’s Department Store, and even the long-defunct One-Eyed Jacks. And while there were many tales that ran the gamut from endearing to disturbing to downright bizarre, a story about one former worker is truly baffling.

Julie Duvic was the Great Northern’s concierge from 1984 until shortly before her untimely and somewhat suspicious passing in 1996. By most accounts she was an outwardly ideal employee, catering to the whims of Ben Horne despite her paltry pay. She was also known to be quite put upon by other members of the Horne family, especially Audrey who would regularly toy with Ms. Duvic as a method of distraction for Audrey’s amusement. In fact, it is said that in one instance, Ms. Horne single-handedly prevented a lucrative investment into Ghostwood Estates by wealthy Norwegians simply by forcing Ms. Duvic to sop up some spilled coffee.

Several of Ms. Duvic’s coworkers noted that beyond her neatly-pressed uniform, shiny name badge, and her friendly willingness to assist guests by recommending sightseeing tours and the best restaurants Twin Peaks had to offer, there was another side of her that wasn’t so pristine. As it turns out, Ms. Duvic, it seemed, eventually learned to take advantage of the drama that often played out at the Great Northern.

According to these accounts, whenever the Hornes’ attentions were even slightly diverted, she would – perhaps as a means to supplement her meager income – turn to stealing from her employer. At first, these thefts were petty and innocuous; a pen here, a stapler there, a stack of Post-it Notes. But as time went by and the Hornes become increasingly unstable, she became more and more bold with her criminal hobby.

Benjamin Horne, it is noted, once had a mental break wherein he was completely fixated on the Civil War, so much so that at a point he believed he was General Robert E. Lee.* Apparently, Ms. Duvic saw this as an opportunity to abscond with one of the Great Northern’s very large – and very heavy – rustic pine lobby sofas.

*This has been verified by witnesses of his psychosis: ex-wife Sylvia Horne, Dr. Lawrence Jacoby, and Deputy Bobby Briggs.

Witnesses report seeing Ms. Duvic approach her former classmate Nadine Hurley, who was visiting the Great Northern with her then-boyfriend Mike Nelson for one of their not-so-clandestine trysts. It is said that Ms. Duvic pointed at the piece of furniture several times, then was seen giving Nadine a small sum of money (some say $20, most say $5). Nadine, dressed in a cheerleader outfit, performed a series of pep squad maneuvers as she took the money, skipped over to the couch and lifted it above her head with one arm. Nadine then proceeded out the front door of the hotel, with the piece of furniture held high. Ms. Duvic returned to the front desk, began banging on the service bell as a warning to lobby guests and shouting, “Out of the way, please! It needs reupholstered!” It is said that Nadine walked the sofa all the way to Ms. Duvic’s mobile home. (Oddly, there is no record of this at the Twin Peaks Sheriff’s Office.)

Ms. Duvic’s somewhat compulsive kleptomania – which by all accounts became exceedingly more brazen over time – is not the end of the story, though. I cannot speak to the high she got from making her nondescript trailer look just like the audacious grandeur of the Great Northern, albeit in a rather a tight space. I can, however, speak to the lows that preceded her death.

Ms. Duvic passed away in early May, 1996. The exact day is undetermined. She, as an “ideal” employee, simply did not show up – no call, no show – for work several days in a row. Of course, there were many phone calls.

It wasn’t until her employers reached out to her daughter, Alice, days later. Alice, and her then-boyfriend, Guy Tremond, found Ms. Duvic dead in her trailer. The cause of death, according to coroner Dr. Hayward, was simply “a lack of life-force that resulted in a complete body meltdown.” I emailed the doctor to inquire about the esoteric manner in which he described Ms. Duvic’s asymptomatic demise, and he responded rather quizzically, “I’ve only seen this once before: Josie Packard.”

This leads me back to the discovery of Ms. Duvic’s body in her trailer. When Alice and Mr. Tremond discovered the body, they were confronted by a barrage of presumably-stolen Post-It notes adhered to a bedside stand that was clearly stolen from the Great Northern. It was because of these notes and the seemingly panicked scrawl written on them that makes Julie Duvic an interesting case.

The words written on the Post-Its, as photographed by the Twin Peaks Sheriff’s Department, all demonstrated paranoia of the piece of furniture they were attached to. Analyzing them I realized none of the notes featured dates and/or times or their authorship, but thematically they make some kind of marked sense. They, the notes, all spoke of another person; an entity that was not invited into Ms. Duvic’s home but utterly consumed her with dread.

To be more precise, Ms. Duvic was completely overwhelmed by – as odd as this seems – Jocelyn Packard, whom Ms. Duvic surely would have known from Mrs. Packard’s semi-regular meetings with Ben Horne at the hotel. “She’s here.” “I can hear her night and day!” “I remember! It’s Josie Packard!” “She wants me dead, too.” That is just an example of the notes left behind, some with arrows pointed toward the knob of the nightstand’s drawer.

In a recent interview I conducted with Alice, I inquired about the belongings of Ms. Duvic’s trailer. She said the Hornes had no interest in taking them back so she sold most of the objects. She did, however, keep a few of the items. She and her now husband Guy Tremond were planning to buy a larger home in Twin Peaks and they may need the extra accents. I believe they kept the nightstand. 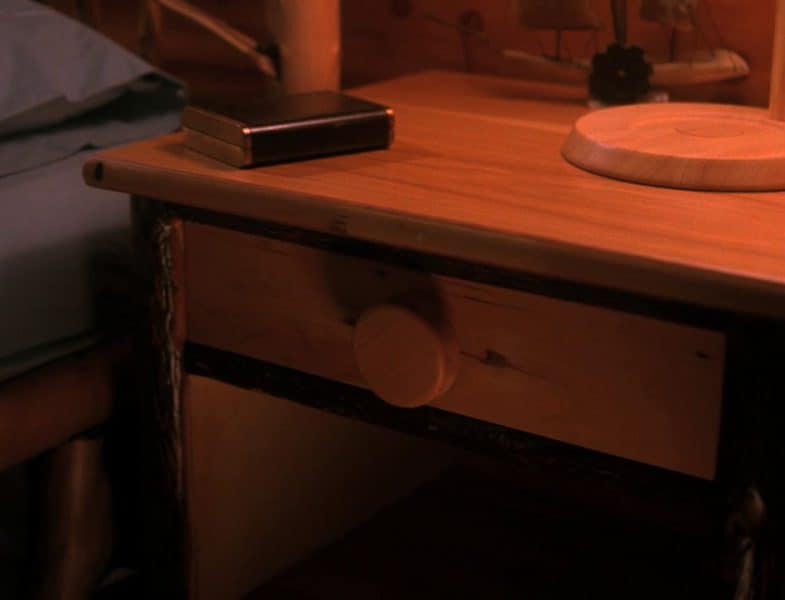 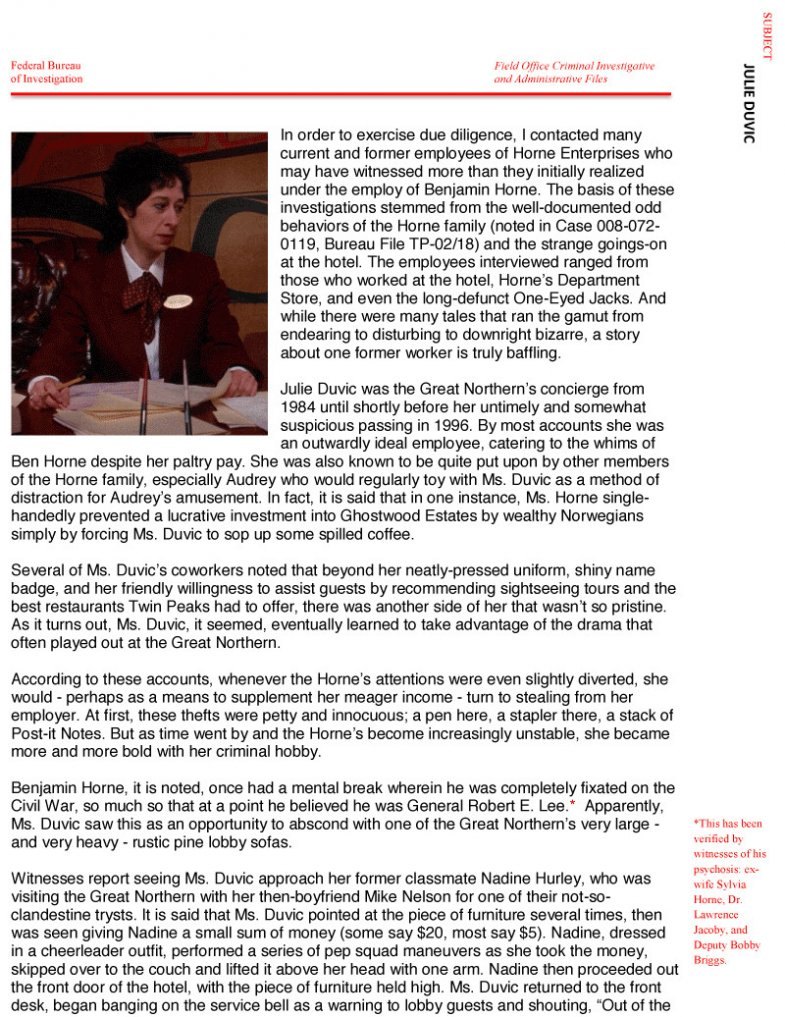 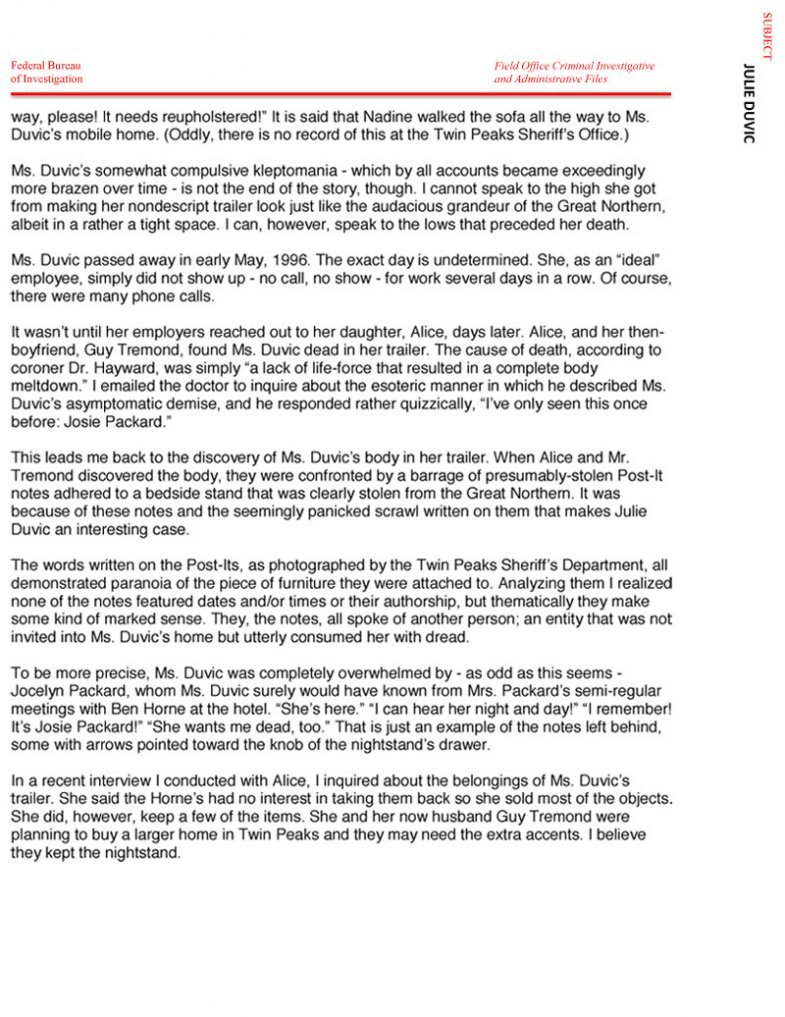 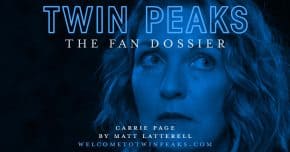