Belgium, listen up because my log has something to say: Catherine E. Coulson is attending the third edition of the Antwerp Convention coming weekend!

“The Log Lady” will also give a scheduled talk on “Working with David Lynch through the years” at the convention’s lecture space. The American actress is not the first Twin Peaks cast member to be invited to the Belgian convention, as Carel “The Giant” Struycken attended last year. Check out the other special guests for this edition here. 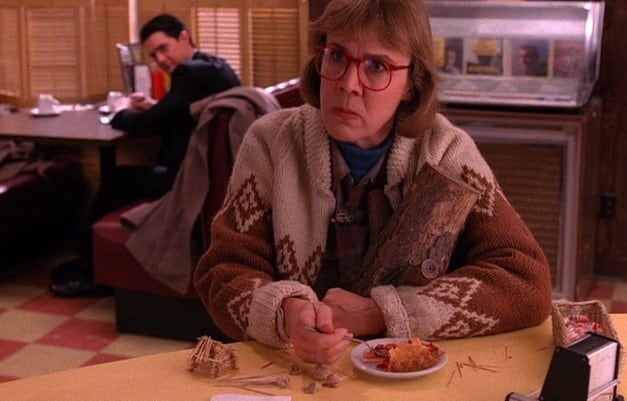 Catherine E. Coulson is best known for her role as The Log Lady in the David Lynch TV series, Twin Peaks. Coulson met Lynch in the 1970s when she was first cast as the nurse and then became his assistant director as well as camera assistant during the five-year filming of his low-budget classic Eraserhead (1977). She also appeared in Lynch’s short film The Amputee (1974), in which she played a woman with no legs. During the filming of Eraserhead, Lynch told Coulson that he had an image in his head of her holding a large log, and wanted to do a TV series with her which would be called, “I’ll Test My Log With Every Branch of Knowledge”. Thirteen years later, he created the role of The Log Lady for her in Twin Peaks, which she performed in 12 episodes through the two seasons. Coulson went on to reprise her role in the film prequel, Twin Peaks: Fire Walk with Me, and later in a similar role: an homage to Twin Peaks called Dual Spires (2010)- an episode of the US TV series, Psych.

Coulson is now primarily a theatre actor as well as appearing in film and television, and has been a member of the acting company of the Oregon Shakespeare Festival for the last two decades (http://www.osfashland.org). The festival is the oldest and largest rotating repertory theater in the United States with three theaters playing 10 months a year. Shakespeare’s plays as well as other world classics and world premiere plays draw over 800,000 ticket buyers each season.