A recent episode of the American animated cartoon series, Scooby-Doo! Mystery Incorporated, paid tribute to David Lynch and Mark Frost‘s Twin Peaks with a very straightforward reference to The Red Room and The Black Lodge. Actor Michael J. Anderson even contributed to the homage by lending his voice to a little dancing man and, of course, mimicking the creepy “forwards/backwards” speech effect.

In Stand and Deliver, the 20th episode of the 2nd season of Scooby-Doo! Mystery Incorporated which first aired in the U.S. on March 28, the gang is in the library researching a villain called Dandy Highwayman. Scooby falls asleep and has a strange dream almost exactly like Dale Cooper’s. Red curtains, zig zag floors, Venus statues, and a little man dancing to jazzy music and saying: “Welcome to the Sitting Room!” Watch the following video to see how the dream sequence goes:

Yes, this is what kids are watching these days and do we mind? Frankly, no!

But wait, there’s more! Scooby-Doo’s nightmare is induced by a so-called Anunnaki which, according to the Scooby wiki, is a creature living in another dimension: “Every few thousand years, during an event called Niburu, the barrier between their world and ours grows weak, allowing the Anunnaki to visit Earth.” Sounds familiar? Dugpa’s… when Jupiter and Saturn meet…

It’s also worth nothing that the dream sequence of the 1981 movie An American Werewolf in London was also referenced in this episode. 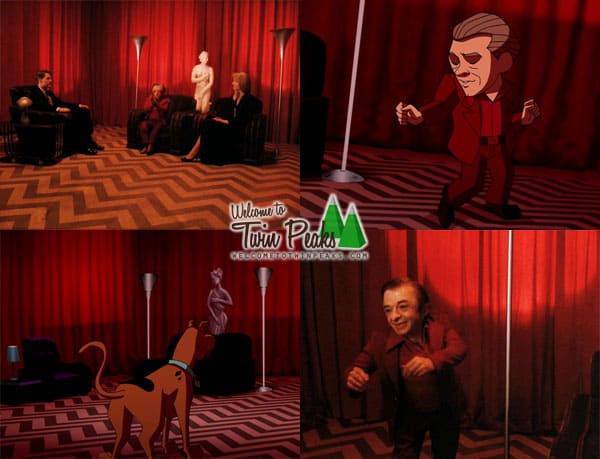 Does Crystal Cove, like Twin Peaks, have an entrance to The Black Lodge?

UPDATE: There’s a second tribute in episode 22, Nightmare in Red. Watch the gang go “in between worlds” and note how Angelo Badalamentish the music sounds: