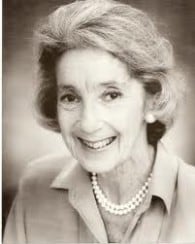 Starting a screen acting career only in her late 50’s, her filmography lists over 150 titles. Cheers, Charmed, E.R., The X-Files, Happy Days, Seinfeld… Name a popular TV series and Frances was in it. Of course, the actress was also a Lynch favorite, playing Mrs. Tremond in Twin Peaks and Mrs. Chalfont in Twin Peaks: Fire Walk with Me, aunt Barbara in Blue Velvet and a madam in Wild At Heart.

May she rest in peace.

BONUS: Frances Bay, member of the Elder Wisdom Circle (“your grandparents in cyberspace”):