In anticipation of the Big Love series finale, The Boston Phoenix spoke with Grace Zabriskie. Referring to her as “Lynch’s lady,” they asked the actress how she learned to play hysterical characters. This is Grace Zabriskie’s answer:

Working with David [Lynch], who loves to take an actor and push them just that much over the edge, so that an audience that has tears rolling down their cheeks will start laughing — or some of them will look very angrily at someone who just laughed. You know the scene in Twin Peaks where Sarah Palmer finds out that her daughter is dead and she starts freaking out? 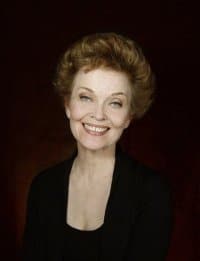 I was in an audience watching. People are crying — they’re crying with Sarah’s grief — and some people are laughing because I’ve just gone that little half-step too far. They got it. They’re laughing, but the other ones, they didn’t get it, and they’re pissed off that someone would dare laugh at this terribly sad thing.

Everything for me comes down to tone. One of my favorite things in the world to do is to make someone laugh and cry at the same time, and it’s rare material that offers that kind of opportunity. And it means basically, as an actor, you have to invest so completely in what you’re saying that the end result is funny. It’s just that tiny little push.

You can watch that scene again in our R.I.P. Laura Palmer post.