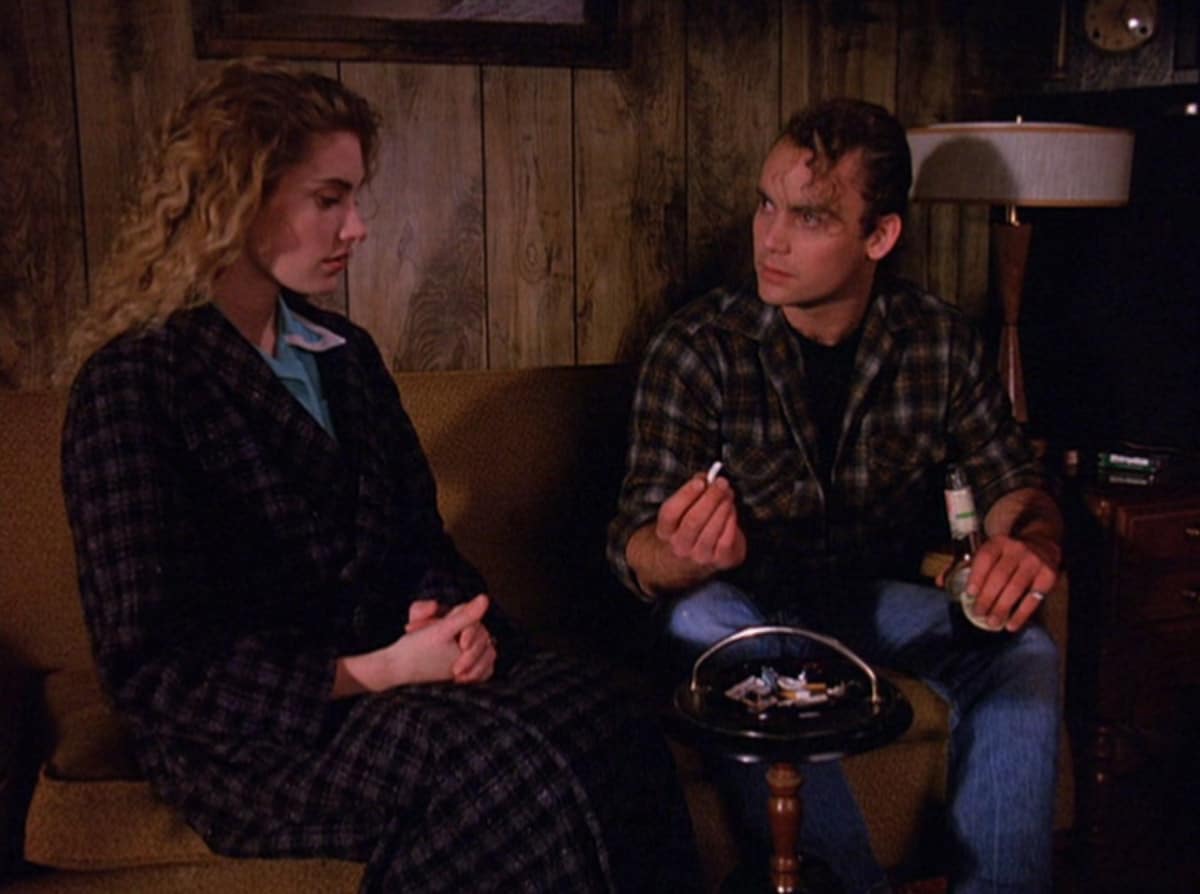 This is the first guest post by Ross Dudle. Ross is a freelance graphic designer and a longtime Twin Peaks fan from day one. You can check out his blog on the music of Twin Peaks and follow him on Twitter as @RDudle.

Back in 2011, I started my own Twin Peaks site to coincide with the music releases from the series that were going on through David Lynch’s website. These releases and my own site really reinvigorated my interest in Twin Peaks and for the next couple years I poured over every inch of the series examining all the music and finding visuals to use for my covers. In doing so, I really became much more familiar with the sights and sounds of the show. Certainly much more than I ever had been before.

Being a visual and detail-oriented person, I re-fell in love with the show and its visuals. Recently, I’ve been posting interesting visual finds on Twitter- such as reused clothing, etc. But I wanted to start a series of articles that explores the exteriors and more specifically, the interiors (sets) used on the show. Instead of posting on my site, which I’ve basically reserved for the music, I decided to post them here.

So first a little background. The pilot was filmed on location in Washington (WA), and all of the interiors were shot in real locations. And many times, both the interiors and exteriors were filmed in the same place/house. For more information about the actual filming locations used in the pilot & Twin Peaks: Fire Walk with Me (FWWM), see Charles’ fantastic site In Twin Peaks.

Once Twin Peaks was picked up for series, the show moved to California (CA) and sets were created & designed by Richard Hoover to film most of the shows’ interiors. For locations that were shown in the pilot, the sets were created to match, mimic, or sometimes expand upon the real locations. Harley Peyton says that for some of the sets, Hoover “turned them by about 30% into another direction”, creating bigger, better versions of the actual locations. And these sets truly were amazing, and really helped to establish the warm look of the series that we all identify with. They are definitely one of the reasons I fell in love with the show.

Having said that, for the most part I much prefer the intricate and detailed sets to some of the real location interiors seen in the pilot & FWWM. For this first article, I’m focusing on the Johnson home. The original exterior of the Johnson house (seen only in the pilot and FWWM) was filmed in WA. And the interiors for the pilot were most likely filmed in this house as well, since that seemed to be the norm for the pilot. But in this case, I don’t know if it’s ever been officially confirmed that they were indeed the same house. 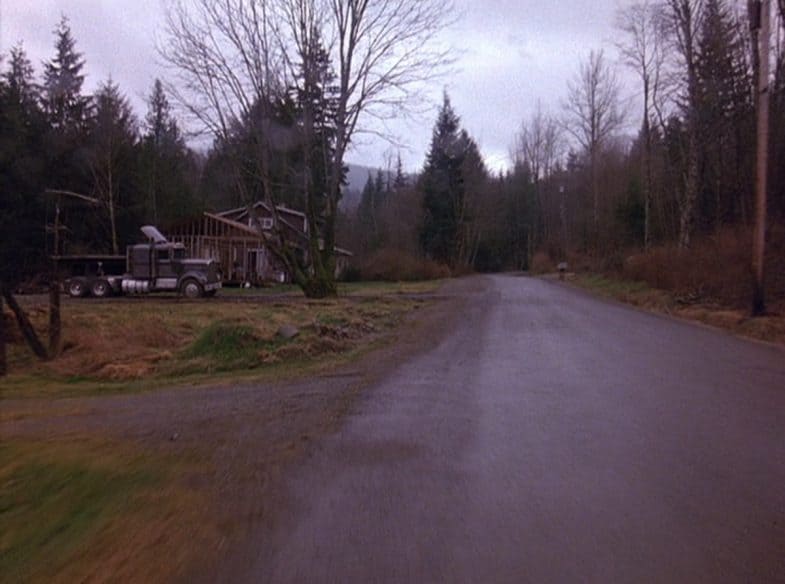 Even though they created sets in CA for the series’ interiors, they, for the most part, continued to use the establishing exterior locations filmed in WA to match the pilot. One of the few exceptions to this was the Johnson house, where they ended up using a different house for the exteriors in the series. This was done because many scenes were actually written and filmed outside of the Johnson home, rather than simply showing the establishing shots of the location. So since they needed to film outside the house, a house was found in CA. To be honest, it was years before I even noticed the two houses were different, as they both feature the iconic half-built exposed lumber. I just assumed it was just from a different angle (!). 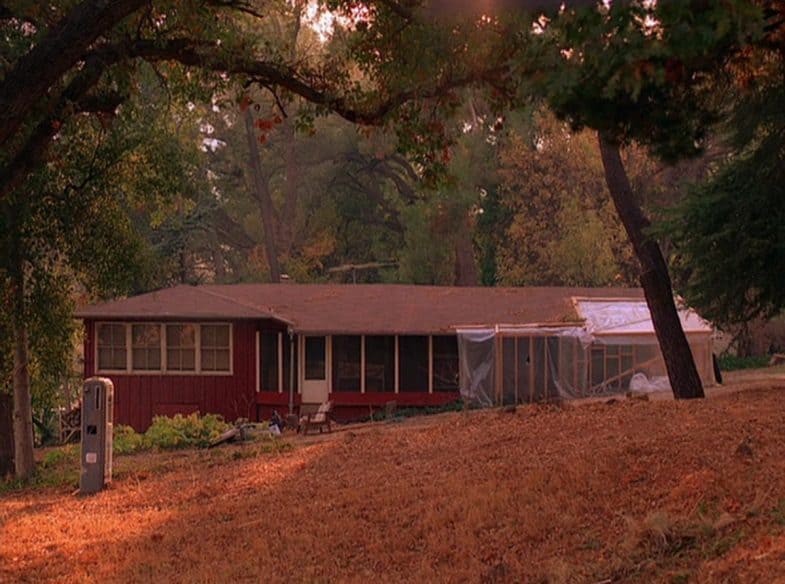 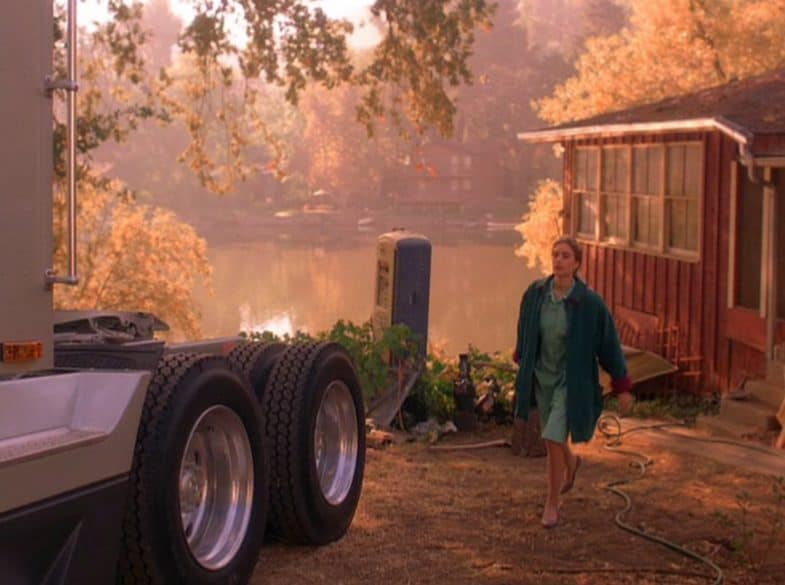 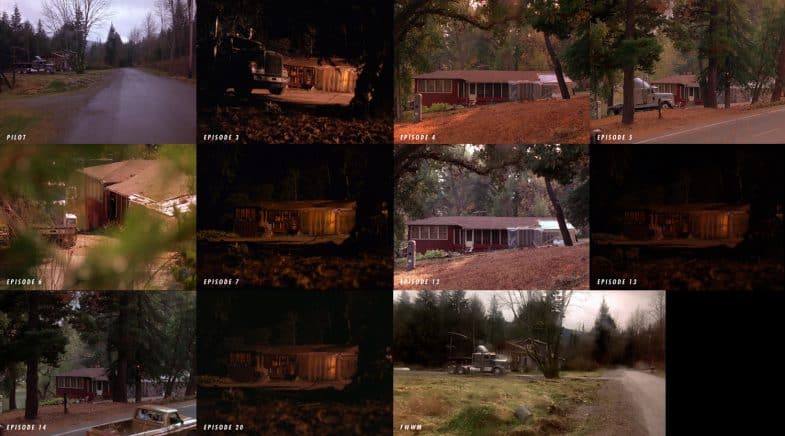 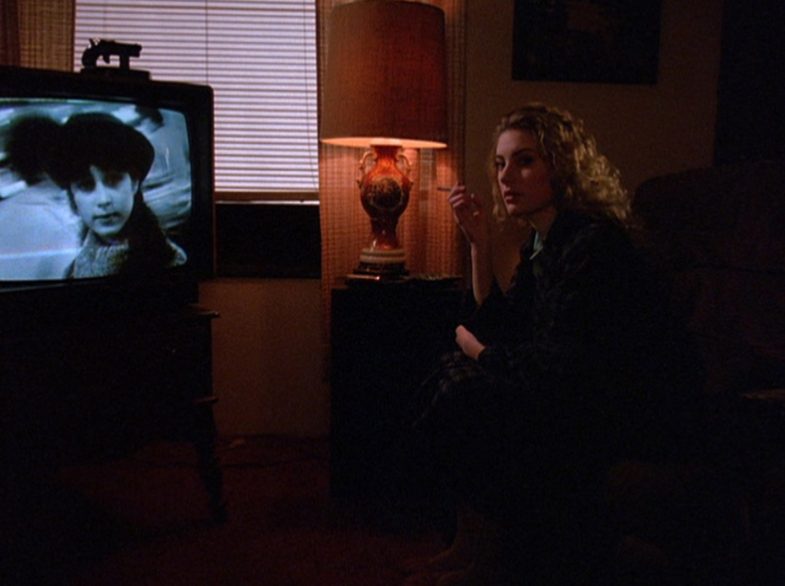 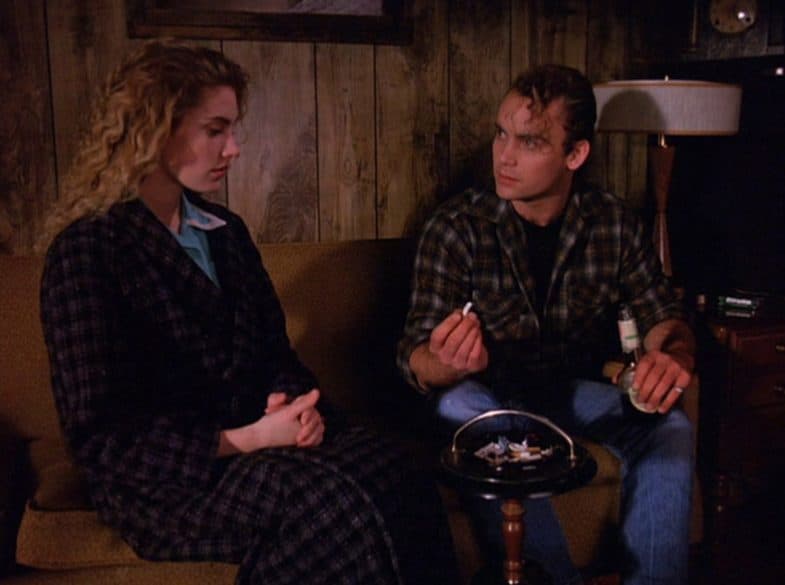 When the sets were created for the series, they based them on what they had filmed for the pilot. Since not much of the interior of the Johnson home was seen in the pilot, it’s unknown how closely they follow the layout and interiors of the actual home. But like the other sets, the Johnson set is fantastic, and with its half-done construction and kitchy design, perfectly captures where one might think Leo and Shelly lived.

These panoramas give you a better idea of the entire Johnson set, which consisted of the kitchen and living room:

Seeing the whole picture, one does have to wonder where the bedrooms and bathrooms are. Perhaps the white, solid door in the kitchen is a bathroom? And the accordion door in the living room leads to the bedroom(s)? A few little things changed in season two. For instance, the picture and dog plates disappeared. 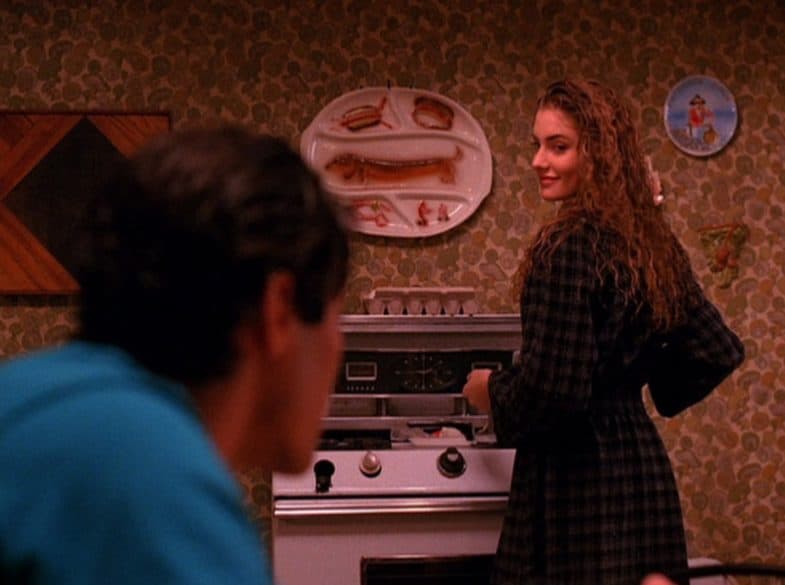 When Leo moved back in after the shooting, the couch moved from one side to the other…

…and his hospital bed was added. Part of the ceiling was even removed to fit in his lifting crane.

For the beginning of episode 21, where Leo attacks Shelly and then flees through the plastic into the night, a few minor changes were made to accommodate the action of the scene.

The diagonal crossbar on the plastic wall was taken down (you can actually see it laying of to the side), and the beam across the wall was raised (to allow Leo to escape easier). When they re-did the wall, they also didn’t bother to put the framed out door opening back (see behind Shelly in the first season shot). 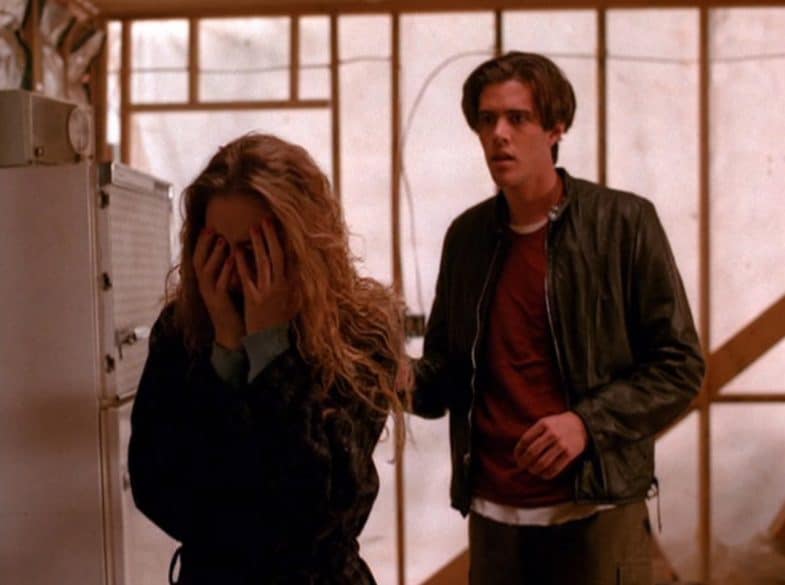 And this window curtain was also added.

This scene was actually the last time the Johnson set was used in the series!

Twin Peaks: Fire Walk with Me

I wish I knew more about the circumstances and decisions made for FWWM when it came to sets and locations, as some are quite bizarre. I love the film and I have since day one, but being as visually detail-oriented as I am, the things that have always bothered me were the cosmetic changes and differences from the series to film. Some couldn’t really be helped: Laura’s wig, the warm weather, DONNA! Whereas others could: Harold’s house, the exterior of Laura’s house, etc. I will get to these in the future.

I think for the most part, Lynch was interested in creating a companion piece to the pilot, so many of its plot points and visuals match and come from the pilot, not necessarily the series. So instead of using the Johnson house exterior that had been seen in the entire series, he went back and used the WA exterior for the film. And since construction on that original house had surely been finished long ago, they actually used establishing footage that had been shot for the pilot 3 years before. 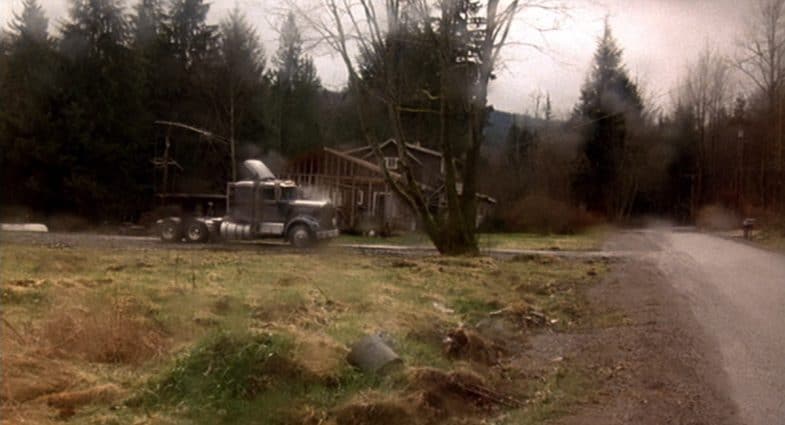 For the film, they mostly went back to WA to film in many of the same locations they used for the pilot, but they did go back to CA for some scenes to film on sets. For years, I had always just assumed that all the sets from the series had been dismantled before FWWM filmed. I think about six months had passed between the filming of the last series episode and FWWM. And if they hadn’t been dismantled altogether, I just assumed that they weren’t available since the film was no longer a production of ABC TV, whom probably owned the sets.

But for the Johnson house, they DID use the actual set from the series! It IS the same set- there is no question about it. I actually only discovered this earlier this year, and was really surprised, as it doesn’t remind viewers of the TV set. The reason is that Lynch decided to shoot at a static angle that completely obscures any of the exposed beams and plastic that you think of when you picture that set in your mind. He didn’t remove or move them, but it’s pretty much the only angle you could shoot the kitchen from where they are not visible. Something tells me this was intentional on Lynch’s part, as so many other things in the film look different, and even when he used the same set, he filmed it in an unfamiliar way.

However, every single stitch on the set is the same: the table, the chairs, the phone, the curtain on the door (which was added in episode 21), right down to the rip in the wallpaper, the broken knob on the stove, and the flower napkin holder on the table! The only difference is the light above the table, for some reason. 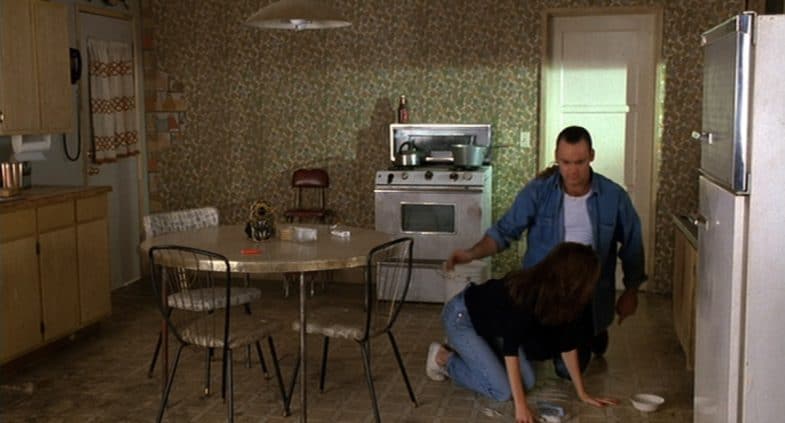 Again, compare this to the pic from episode 21: same wallpaper, wallpaper tear by the door, curtains, red folding chair next to the stove, etc. Notice even the broken knob on the stove. 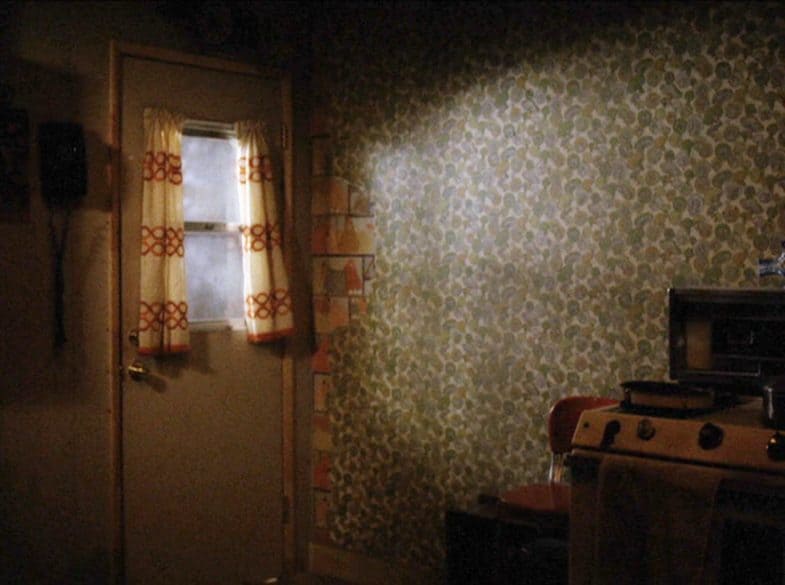 Here’s even the same flower napkin holder seen in episode 1: 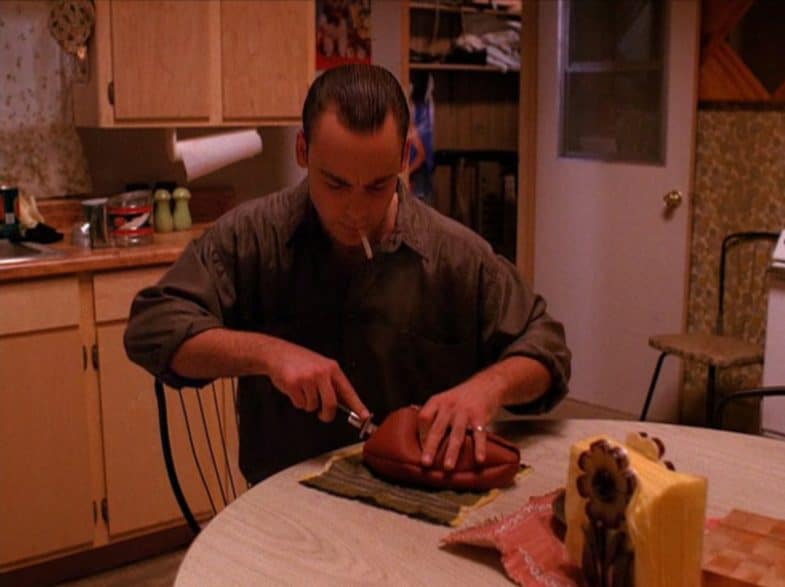 This is the only set used in the (finished) film that matches the series exactly. A couple other series’ sets were used with modifications, but I’ll get to those at a later date. And if anyone has more info on the story behind the series sets and FWWM, I’d love to hear it!

Thanks for reading- more to come!

BONUS: Back in 2011, the owner of the real Johnson house spoke to a group of Twin Peaks Fest attendees about the filming of the pilot.

Ross Dudle is a freelance graphic designer and a longtime Twin Peaks fan from day one. You can check out his blog on the music of Twin Peaks and follow him on Twitter. 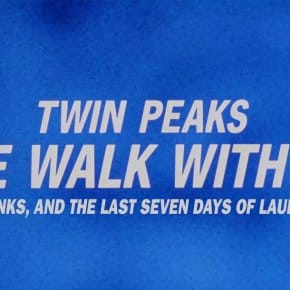 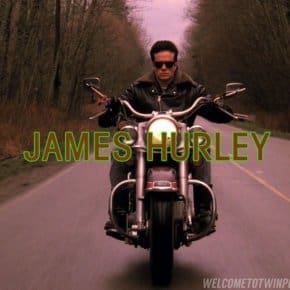