The fan fiction below was written by Mike Segretto and submitted to Twin Peaks: The Fan Dossier, a writing contest hosted by Welcome to Twin Peaks with the support of Flatiron Books and Mark Frost. A new entry is shared every Fan Fiction Friday.

Before I begin, I want to make it clear that this addendum to the dossier regarding the events of Agent Cooper’s disappearance is completely off the record and must not be filed with the official dossier in any capacity. Gordon, I know that you share many of my personal concerns and will appreciate the sensitivity of this particular matter considering your long-standing personal relationship with Chief of Staff Denise Bryson. Amidst the current atmosphere in which every government official who isn’t a member of the good ol’ boys club with a string of sexual harassment charges on his resume is on precarious ground, the Chief of Staff justifiably feels her job is in potential peril and wants to avoid any accusations that she may harbor any beliefs or behaviors more unconventional than those that are already known. I know I don’t have to remind you of the extreme hostility toward the LGBQT community that has been expressed by the current administration (or as you so colorfully refer to it, “The Executive Clown Car”). So the following is for your and Albert’s eyes only… it’s on the QT, the hush-hush, and all that jazz.

So on November 7, 2017, one week after you submitted the final dossier complete with my annotations to Chief of Staff Bryson, she contacted me for an unofficial meeting at American City Diner on Connecticut Avenue. Over strawberry shakes and blackberry pie (scrumptious, incidentally), the Chief of Staff passed me a personal journal she kept from April 1, 1989 through September 9, 1993. As you’ve probably already noticed, that first date
is just a few days after Major Garland Briggs had a fateful meeting with the individual we now know was Agent Cooper’s “double” at Listening Post Alpha and disappeared himself following the fire that devastated the post. On April 1, 1989, Denise Bryson, then a DEA Agent who had recently played a role in the Twin Peaks melodrama as part of the Jean Renault sting, visited the charred grounds where Listening Post Alpha once stood in a completely unofficial capacity. She then returned to the spot every day she could while still performing her DEA duties, convinced that the area provided some clue to the whereabouts of Agent Cooper, her dear and trusted friend who never judged her when she came out as trans.

Eventually, Agent Bryson’s obsessive treks to the site did begin interfering with her DEA responsibilities, yet despite top-level reprimands from Chief Director William Sessions (whose own job wasn’t long for this world, as President Clinton gave Sessions the boot shortly before the journal entries end in 1993), she continued to place her search for Cooper above all other duties. Her journal entries during this period imply a sort of mental fog, which may account for her continued obsession despite a complete lack of progress. The entries are short and elliptical, a typical one dated June 10, 1991 reads, “Noon… forecast: sunny… yet dark… very dark. The aroma of scorched sycamores. Drawing me down… deeper…deeper. Falling. A fox barks.”

From then, Agent Bryson makes numerous references to foxes, but only in elusive terms: sounds, shadows, rustling in the brush. Then on September 1, 1993, her journals reach a smoldering fervor as she scrawls, “I see him! The fox! The Fox!”

After that day, there are no further journal entries until the final one dated September 9. As you’ll notice, Agent Bryson has lost that fire and returned to a somewhat misty state in this final entry:

“I followed the Fox. Led me through the gate. I followed the Fox… followed him into a room of indeterminate location. All color drained away. A phonograph skipping. No music in the air. I sat opposite a man of incredible proportions. He spoke serenely… oddly. His words as if reversed yet expressed forward. He said: ‘It is now complete. Thank you.’ Held out his hand. Within it a golden sphere the size of a child’s marble. Today I awake in the woods. Memory draining. Everything draining.”

After Agent Bryson’s week-long holiday, she received one final dressing down from Chief Director Floyd Clarke (coincidentally installed as Chief Director on the day of Agent Bryson’s disappearance) before assuring him that she would get back on track at the DEA. In fact, she no longer had any distractions since she no longer had the slightest interest in investigating Agent Cooper’s whereabouts. She then resumed the stellar yet completely non-spooky drug enforcement work that would ultimately lead her to the Chief of Staff’s office.

Here’s where this weird story gets really weird. The day after Agent Bryson’s return, a young agent with a background in medical science is assigned to a project outside the bureau mainstream. The project is helmed by an agent working alone. The project is essentially an “unofficial” resumption of Project Blue Book: the FBI’s super-secret investigation into UFOs with which Major Briggs was obsessed prior to his disappearance. Now for the freaky part. This agent is the spitting image of Denise Bryson. I mean, they are identical. And he is every bit as obsessed with his work as she once was obsessed with Cooper’s disappearance. Like Agent Bryson, he is convinced he lost a loved one to supernatural forces: a younger sister named Samantha.

I now believe that this agent is a Tulpa created in Denise Bryson’s image. The Tulpa and his new partner went on to perform work that supposedly saw the scuttling of such potentially calamitous events as the colonizing of Earth by hostile extraterrestrials and a veritable Sixth Extinction annihilating all life on the planet (in addition to relatively minor scrapes with witches, werewolves, sideshow oddities, and other humbugs). I’m sure you’ll
agree that these are the kind of cosmic good vs. evil machinations we are becoming more and more aware of as members of the Blue Rose Task Force. So I believe that during her stay in that “room of indeterminate location,” a Tulpa that inherited all of Agent Bryson’s obsessive dedication was constructed to continue Major Briggs’ Project Blue Book work while Agent Bryson was allowed to resume her former work and ultimately rise to the office in which she has been of such pivotal importance. The Tulpa seems to only really differ from the obsessed person that Agent Bryson once was in that he has no predilection for pencil skirts, pantyhose, or pumps. The Tulpa exclusively identifies as male… right down to the standard-issue porno fixation.

The Tulpa’s files would choke a school of narwhals, and this is not the place to descend down that particular blowhole. So I will only note two relevant details I gleaned from them. Firstly, one of the Tulpa’s own “unofficial” cases found him floating in the Bermuda Triangle in search of a ghost ship and allegedly travelling back to 1939 where he was pulled aboard a luxury ocean liner and became embroiled in some high-jinks involving Nazis. I won’t bore you with the details (clarification: they aren’t boring), but I’ll posit this theory: if the Tulpa really did time travel, that may have “reset” time in such a way that those in his orbit (including a mother, a father, and some sort of high-level member of government with a particularly repugnant smoking habit) now had memories of him that predated his creation in 1993. In a sense, the Tulpa’s time travelling wrote over their histories with details of his artificial past. Again— just a theory.

My other note is that the Tulpa’s files include a photograph of his partner’s father: a U.S. Navy captain named William Scully. Gordon, this man is a dead ringer for Major Briggs. I have no theory about this bonus wrinkle in an already profoundly crumpled quilt. 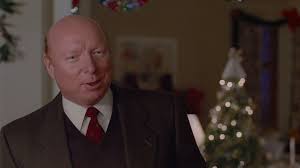