Strobe lights flashed. Smoke billowed. Characters unsettlingly laughed and staggeringly talked like they were imitating what seemed like human interaction. Kids behaving like animatronic animals danced while people in suits insisted that everything was normal. A mysterious character in a shiny suit named The Slinky Boy kept popping on and off the stage, ominously foretelling all. (Source: OnMilwaukee.com)

Every year, the students at Highland Community School, a public Montessori school in Milwaukee, WI, put together an original show that attempts to test the limits of what children’s theater should be. Last year, for example, their play ZERO followed the cyberpunk genre. This year, 4th, 5th and 6th graders are performing Judy Plays With Fire and, you guessed it, it’s one big Twin Peaks and David Lynch homage.

While far from a straight Peaks adaptation (it’s more of a David Lynch mash-up), Judy has plenty of characters that will be recognizable to series fans. The Log Lady becomes Slinky Boy, a mysterious figure dressed in a metallic outfit and prone to making proclamations like “My Slinky has a message for you!” Triple-crossing Great Northern baron Ben Horne becomes Mr. Frost (a nod to Peaks co-creator Mark Frost), the duplicitous owner of an ice cream parlor complete with a Chuck E. Cheese-inspired animatronic band (played by students dressed in animal costumes and tutus). The heroic and pie-obsessed FBI agent Dale Cooper, meanwhile, becomes Dana Andrews, who demonstrates her preternatural detective skills not by intuiting a killer’s identity via the Tibetan rock-throwing technique, but by finding a townsperson’s missing pen and sniffing out a counterfeit Pokémon card. (Source: Milwaukee Record)

According to drama teacher and director Barry Weber, David Lynch himself has been made aware of the play and he was extremely excited to hear that the Highland Community Players are bringing his bizarre style and his essence to the stage. There’s no minimum age for surrealism, is there?

UPDATE: Here’s a video of one of the key scenes from the play: the dream sequence. 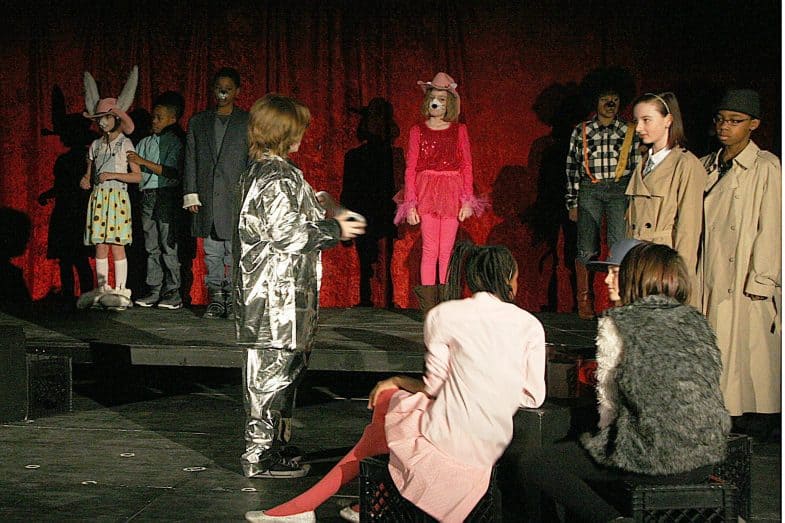