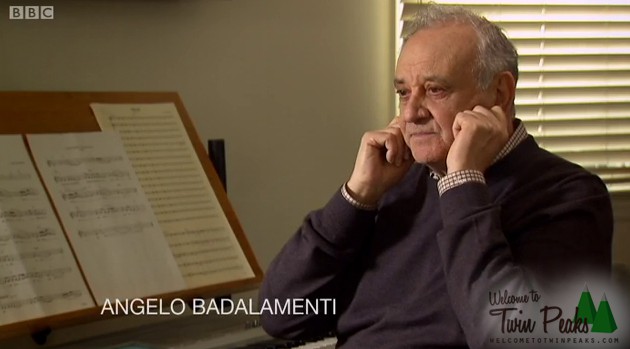 “[Angelo Badalamenti’s] music is the sound of Lynch’s world. With all its paradoxes. It’s cold but at the same time, it’s very warm. It’s nostalgic and yet it’s very modern. And to be frank, for me, David Lynch’s films couldn’t work without Badalamenti’s music.”
—Neil Brand (in The Sound of Cinema: The Music that Made the Movies)

BBC Four is currently airing The Sound of Cinema: The Music that Made the Movies. A documentary about, you guessed it, film music. In the second episode of the three-part documentary, titled Pop Goes the Soundtrack, writer, composer and film music aficionado Neil Brand explores how in the second half of the 20th century, composers and film-makers embraced jazz, pop and rock to bring fresh energy and relevance to film scores. He pays a visit to Angelo Badalamenti, who, as he often does, gives an animated recount of his meetings with David Lynch when working on the soundtracks for Blue Velvet and Twin Peaks.

Badalamenti describes the creation of the Love Theme from Twin Peaks almost exactly like he does in the “Creating The Music” bonus feature on the Twin Peaks: Definitive Gold Box Edition, except for the part of having to play even slower:

David comes in and he says: “We’re in a dark wood.”
And I’m going like… [plays the first notes of Love Theme from Twin Peaks]
-No, Angelo, those are beautiful notes but can you do them slower?
Oh, ok [plays them slower]
-No. No, Angelo. Slower.
David, if we do any slower I’m gonna play in reverse!

Sound of Cinema: The Music that Made the Movies Part 2 – Pop Goes the Soundtrack

In the unlikely case you haven’t seen it yet, here’s the probably first documented version of the “Angelo, that’s Twin Peaks!” story: 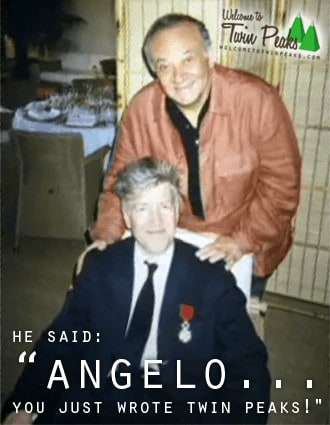 Angelo Badalamenti Talks David Lynch In BBC Four Soundtrack Documentary has already gone places with 1179 Facebook shares
You can just stay where you are, but please share this post