On November 30th 2013, Riverside Studios in London will probably smell a lot like doughnuts, cherry pie and smoked cheese pig. And that’s because the Twin Peaks UK Festival is back next month for its 4th edition already!

In past years, the festival welcomed phenomenal special guests such as Julee Cruise, Catherine E. Coulson, Kimmy Robertson, Al Strobel, Lenny Von Dohlen and Phoebe Augustine. But wait until you see the guest list for the 2013 edition:

There will be an art gallery, a performance by The Double R Club, a screening of Lost Highway, and a charity auction to raise money for the Macmillan Nurses for Cancer Care with very special contributions by Twin Peaks prop master, Jeff Moore! More details to follow!

Tickets are on sale here. Grab one before the sell out!

Remember: if you own any of our Twin Peaks t-shirts, be sure to wear it at the fest and take photos of yourself with the guests. I’ll happily share and reward the best ones with a little something.

Here’s a video report of the 2012 edition of the Twin Peaks UK Festival. 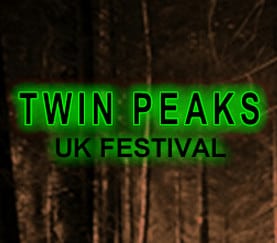 Twin Peaks UK Festival 2013 With Mädchen Amick, Ian Buchanan & Charlotte Stewart has already gone places with 234 Facebook shares
You can just stay where you are, but please share this post