A closer look at the "box monster" and possible connections

What a ride this has been - and we're only four hours in! My head has been swirling for two days straight.

I've been going through the episodes again, this time flipping through to sequences that stood out to me as visually significant. The "box monster" seemed like a good place so start.

When we get the first glimpses of the monster inside the box, she(?) appears to be holding her hands close to her abdomen. The exact pose is hard to make out, but she appears to be cupping her hands together or clutching her upper torso.

We can see a faint yellow/golden glow just above her hands that begins to flutter and fade away - a detail I haven't seen pointed out elsewhere. 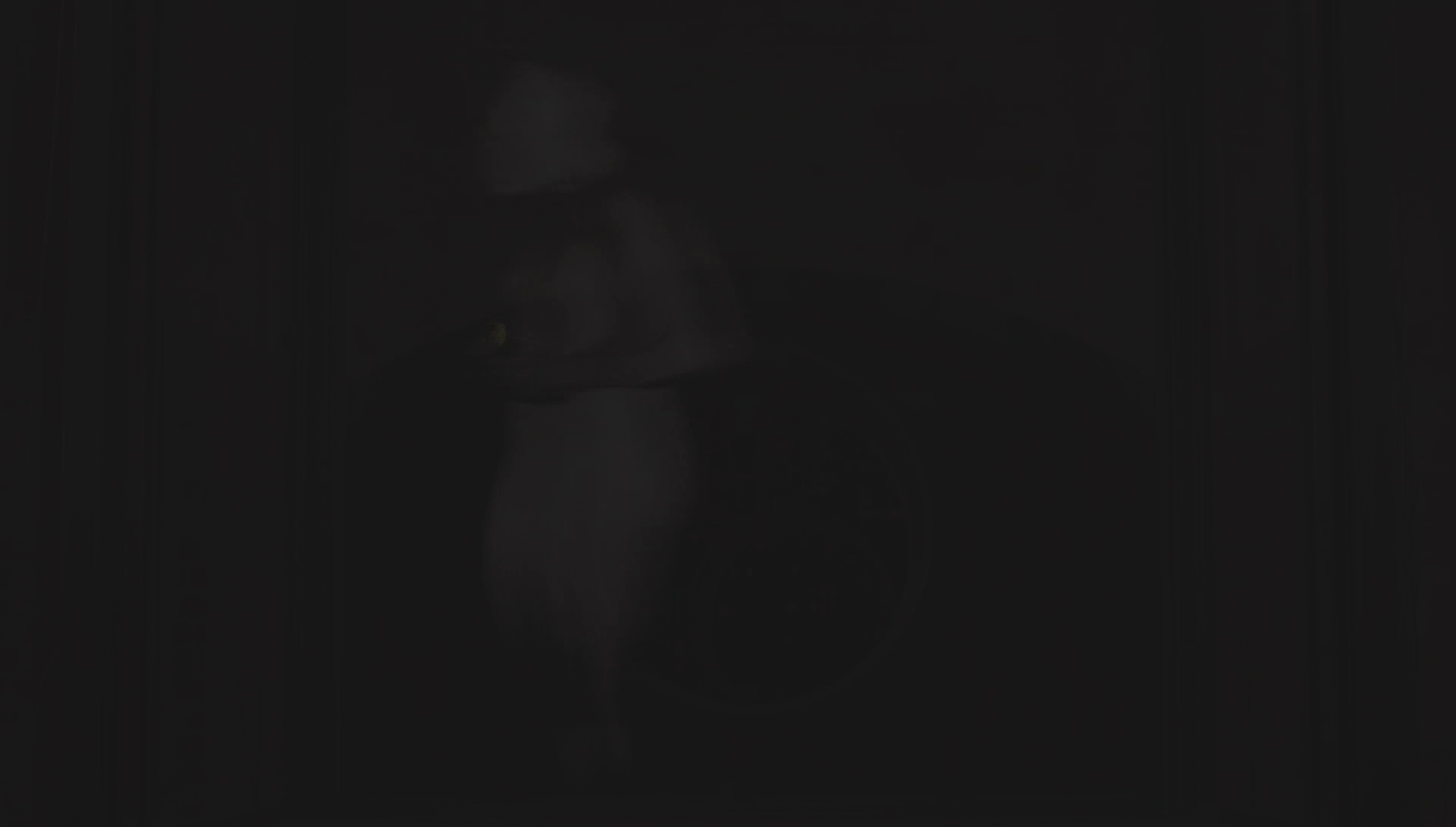 Once the golden object is completely gone, her body begins to come into focus and we can clearly see her mouth gaping open. She turns to the couple on the couch. It seems to me that she was either attempting to catch whatever the golden object was, or perhaps keep it within her. The body is comparable to the Venus statue seen in the hallway of the Black Lodge (which is also what The Arm's doppelganger emerges from) 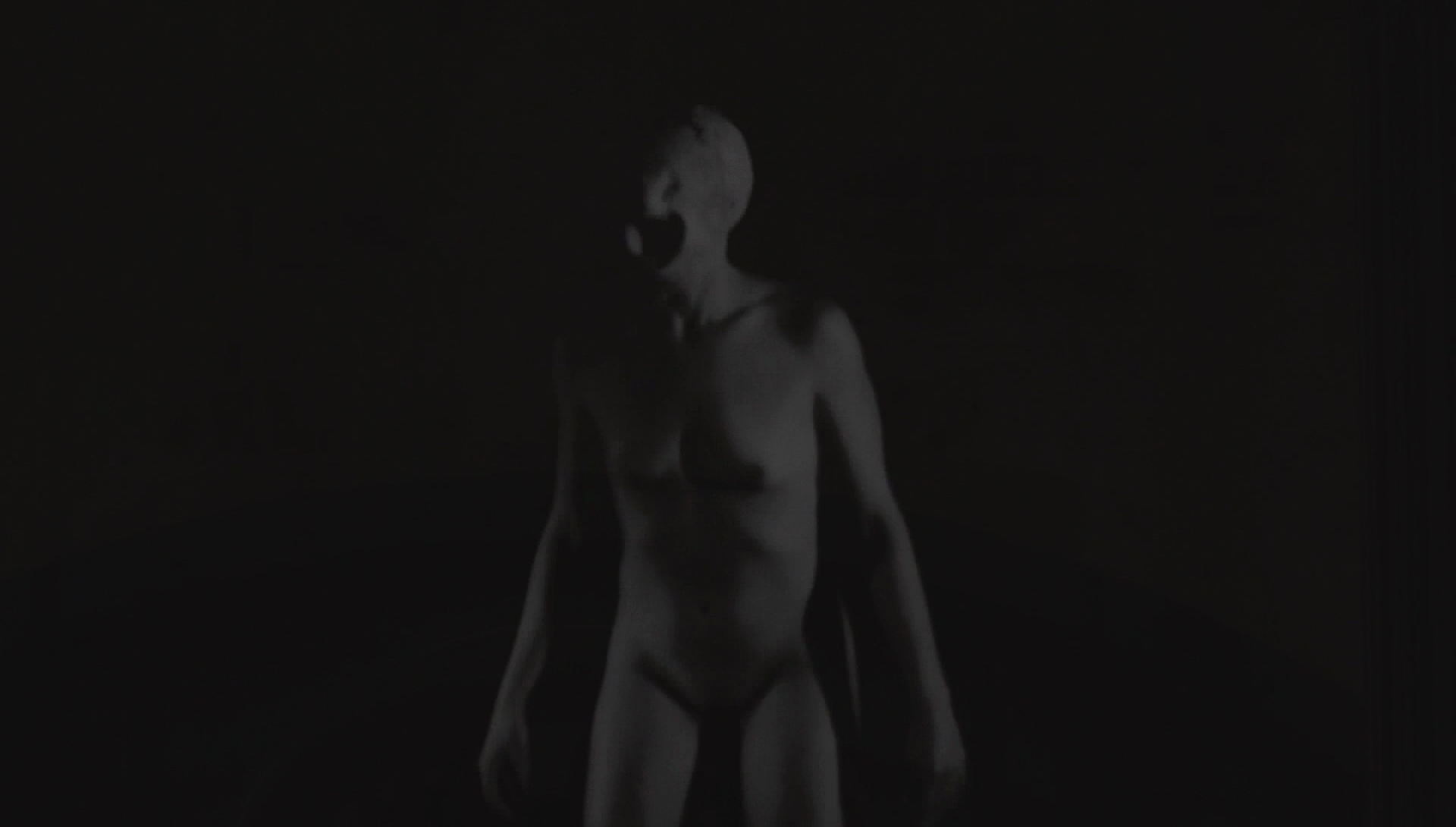 The small handful of frames as she "breaks through" the box are quite chaotic and beautiful. 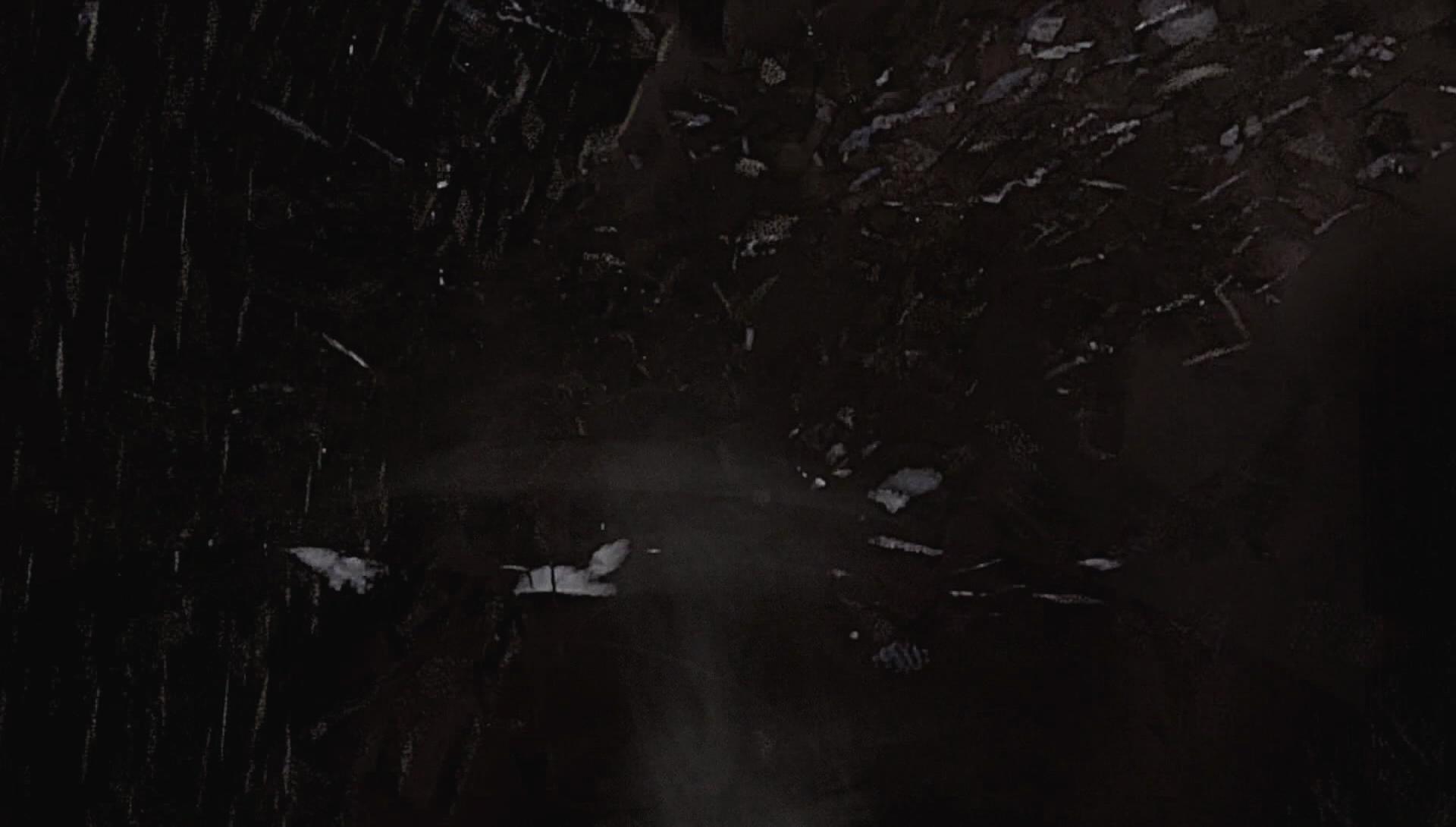 Things move very quickly during the attack, but it looks as though she uses her "tongue" to burrow into the victims' heads. 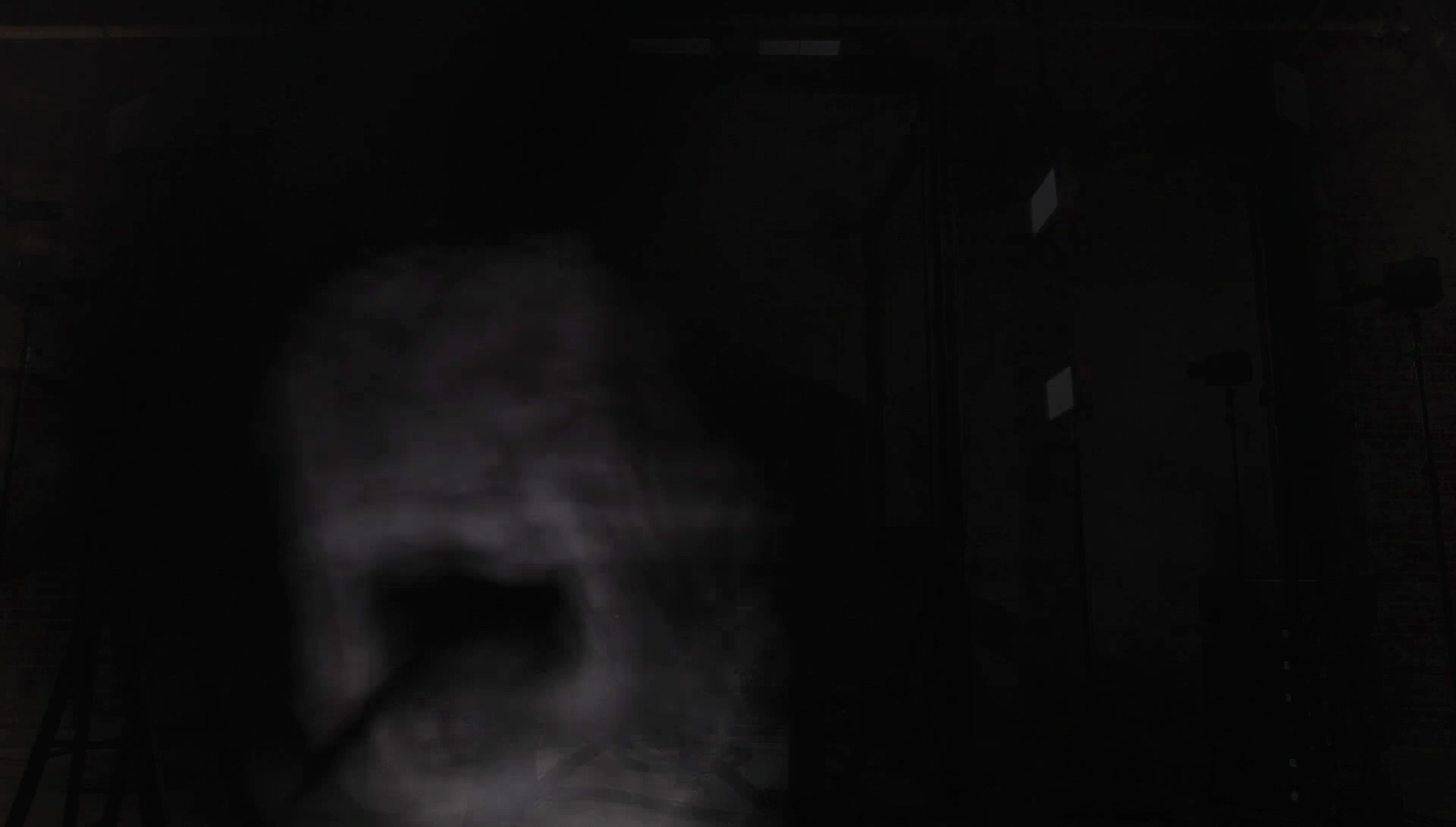 Next I'll point out things that seem "connected" to this scene in some way. I'm resisting the urge to project clear-cut meaning this early, but at the very least it seems clear that gold is going to be very significant.

First, we have the golden pearl that emerges from Dougie after his body slinks away. Could the object seen hovering by the box monster be another golden pearl? It seems like it could be part of the relationship between the doppelgangers and the Lodge. 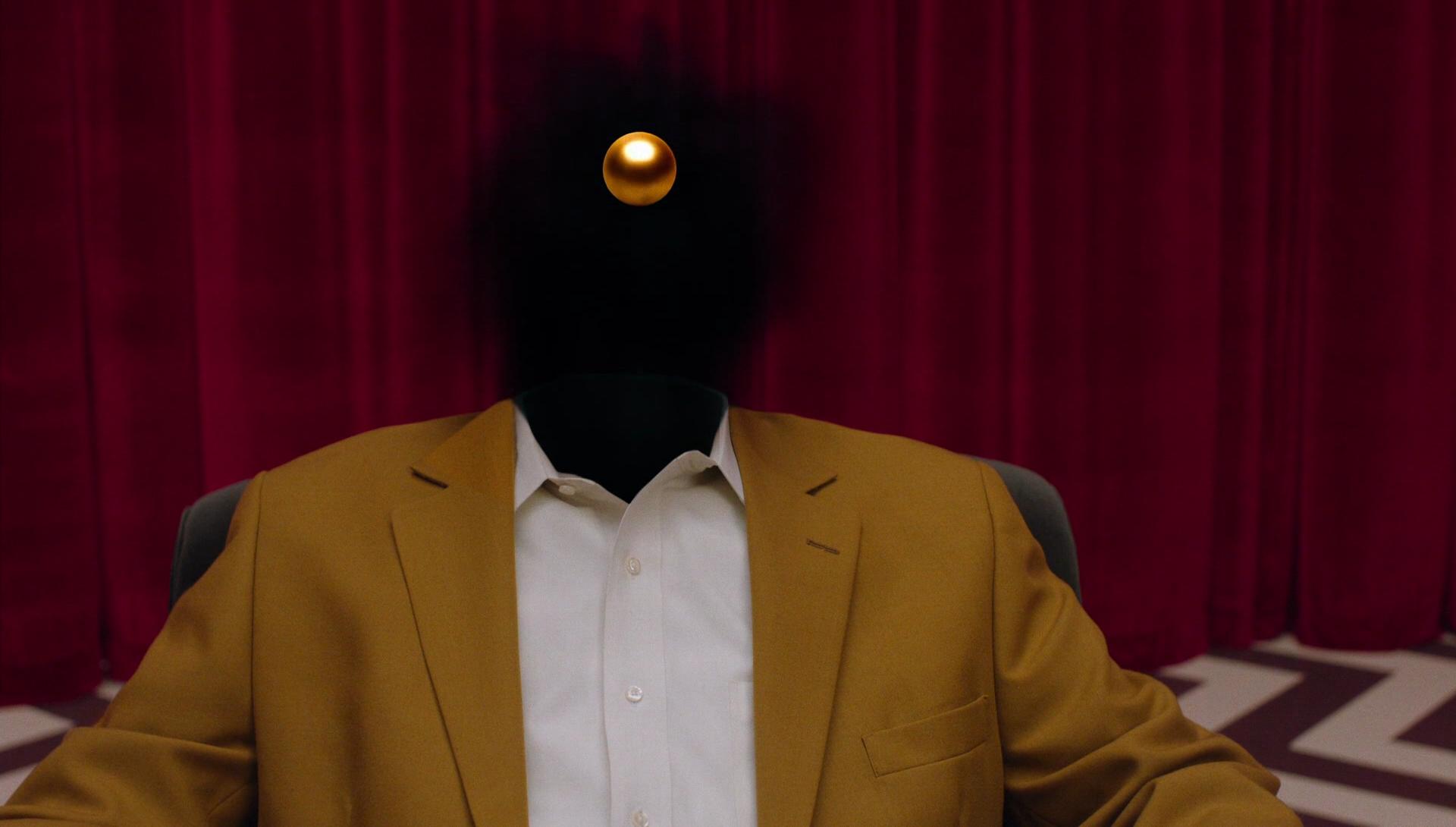 Once the pearl is removed, the rest of Dougie turns into a black, amorphous blob and quickly slinks away, leaving the pearl behind. 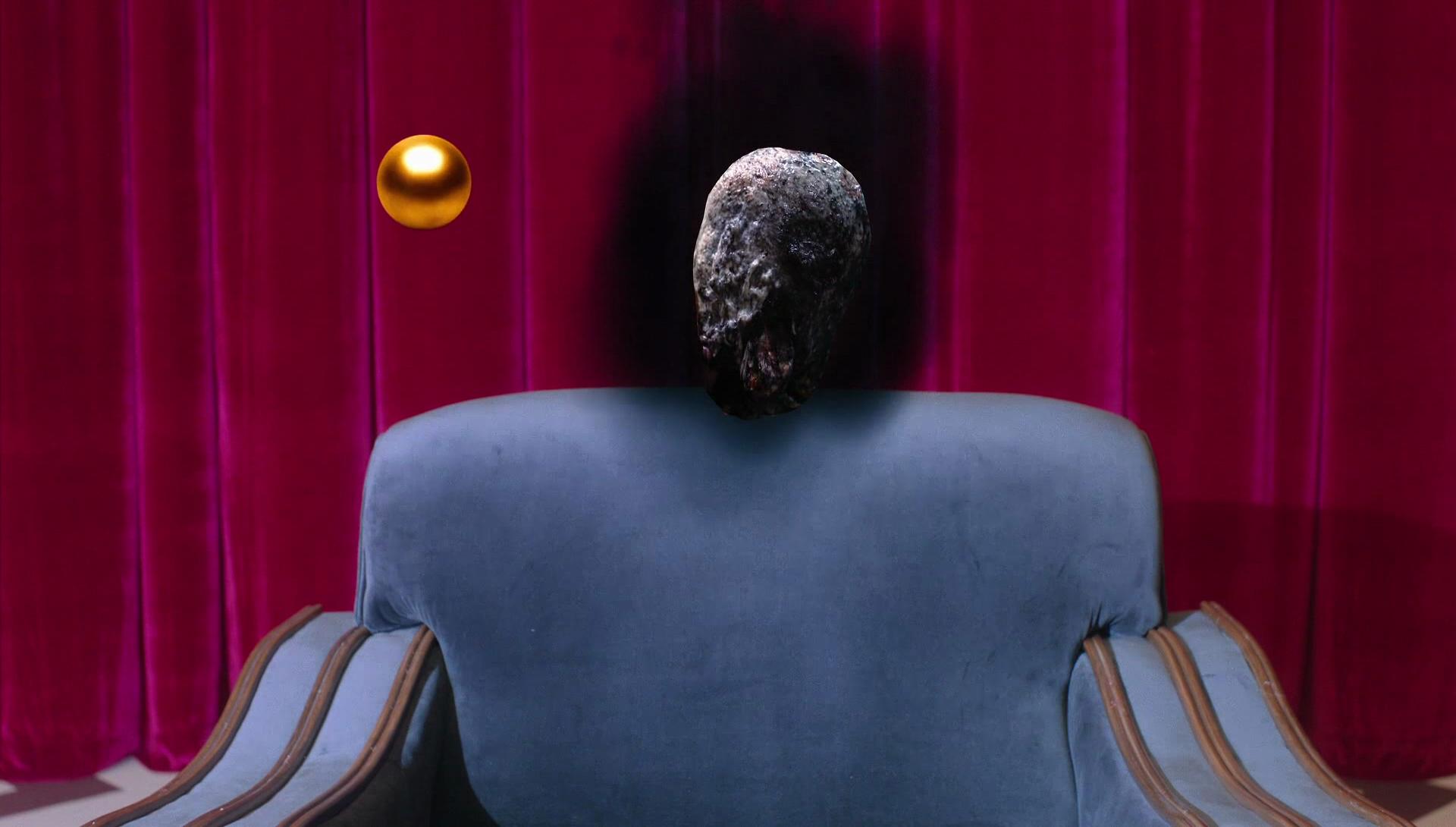 Mike picks up the pearl and places the ring on top of a black marble table set with an ornate golden base. 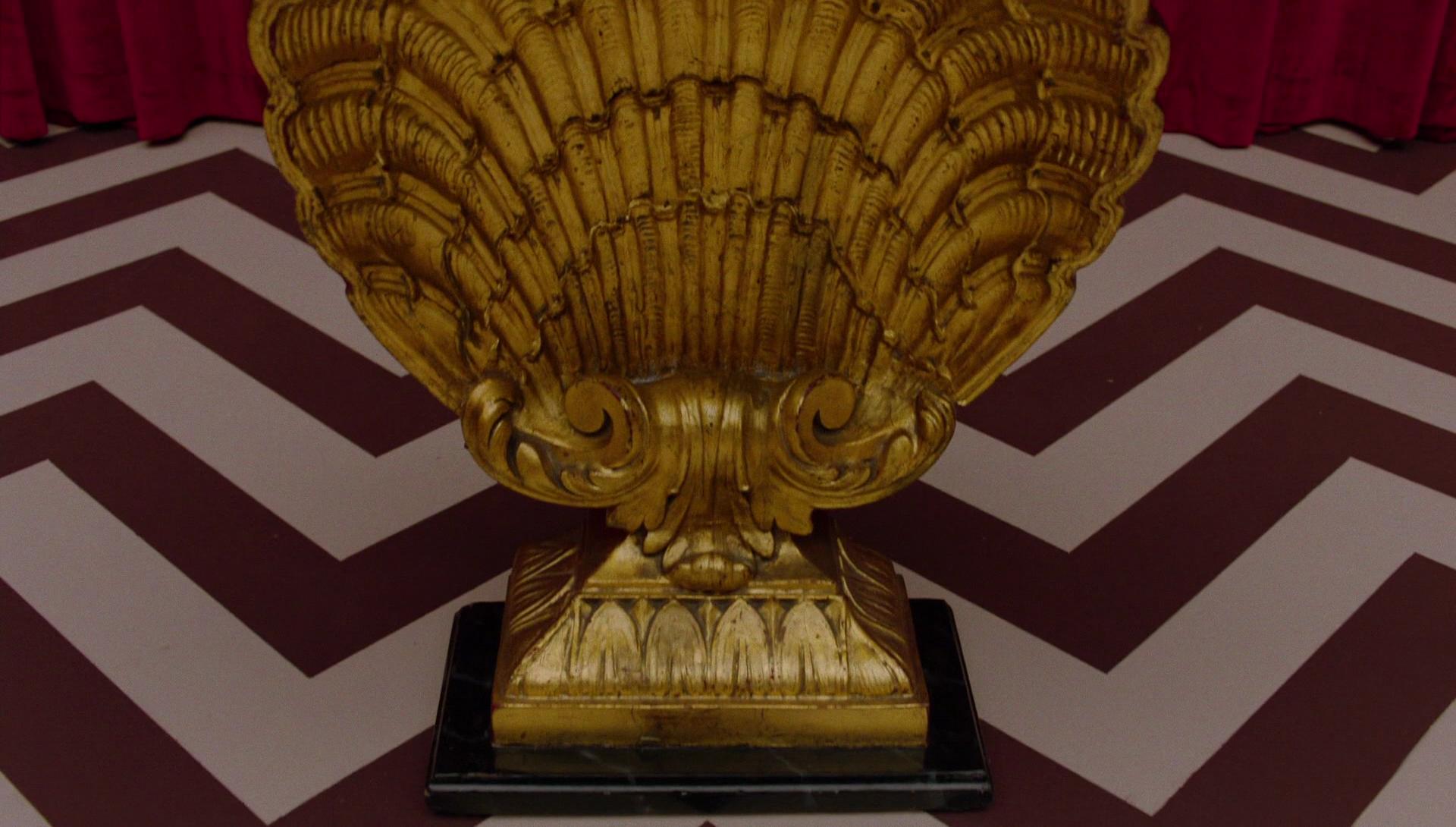 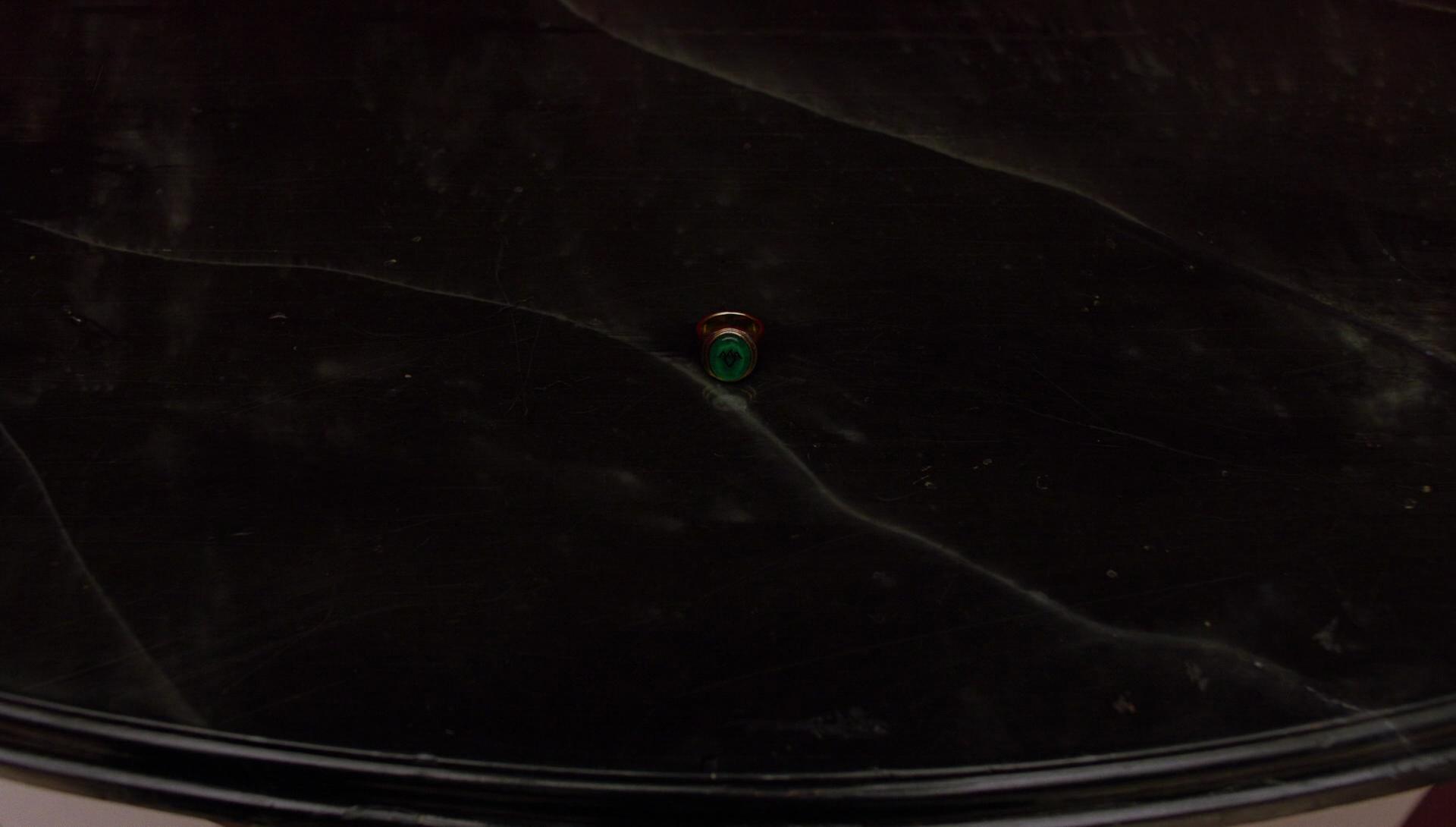 The coloring of the table reminded me of the carpet that we see briefly in the opening shots of Part 1 (the room where Coop talks with The Giant/????) 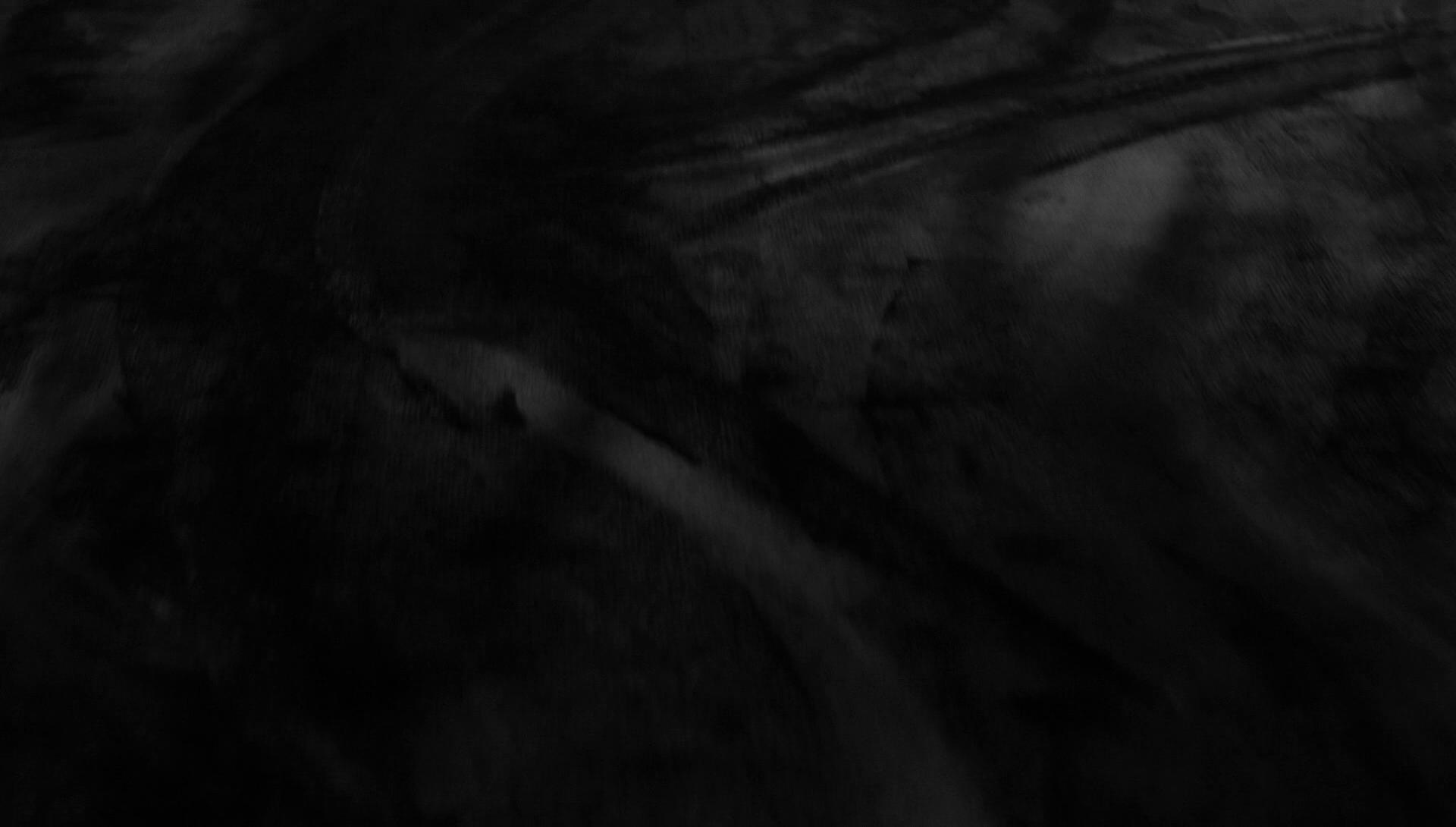 Gold pops up elsewhere as well. Laura is wearing a gold piece of jewelry inset with white pearls and emeralds: 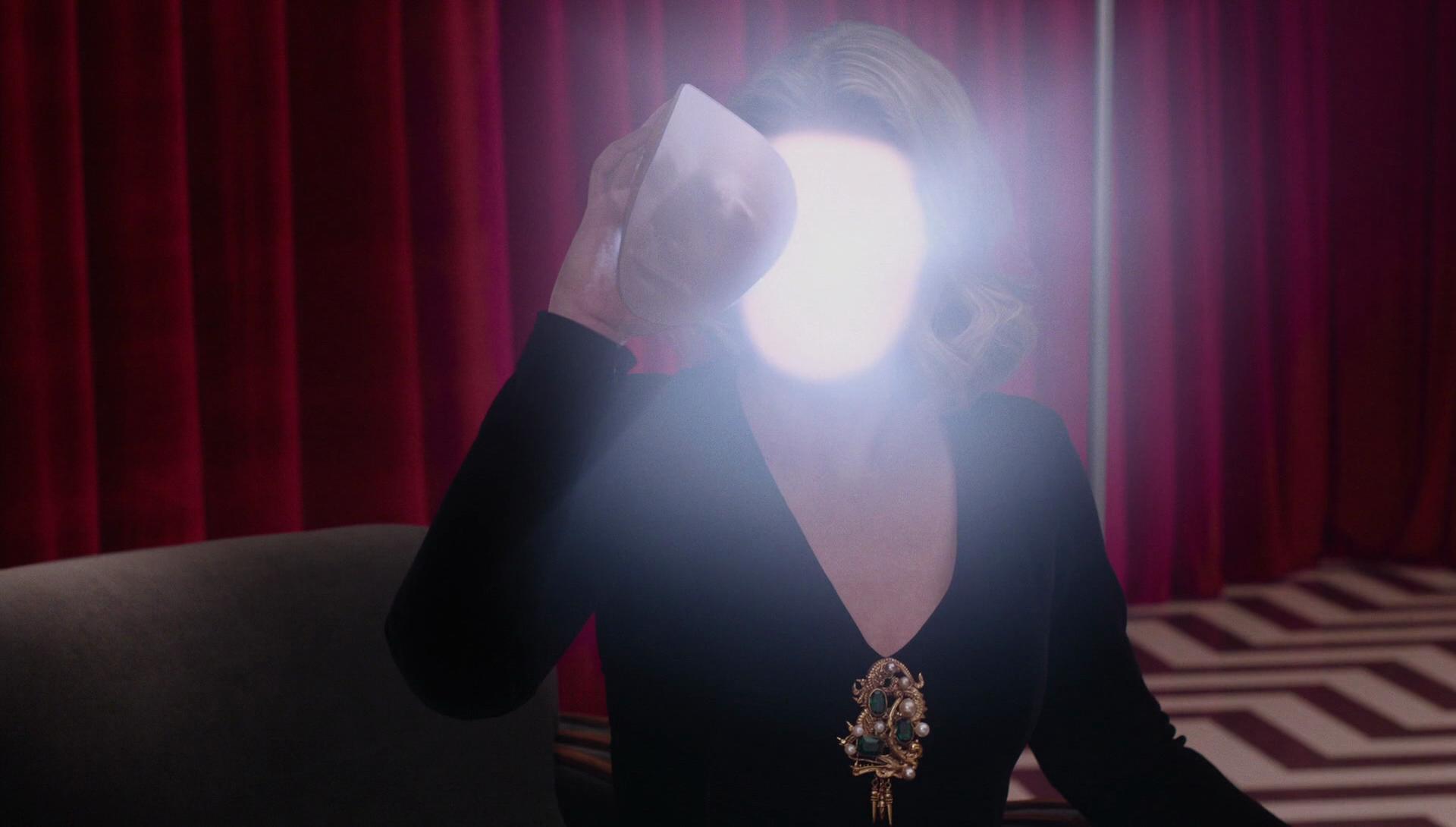 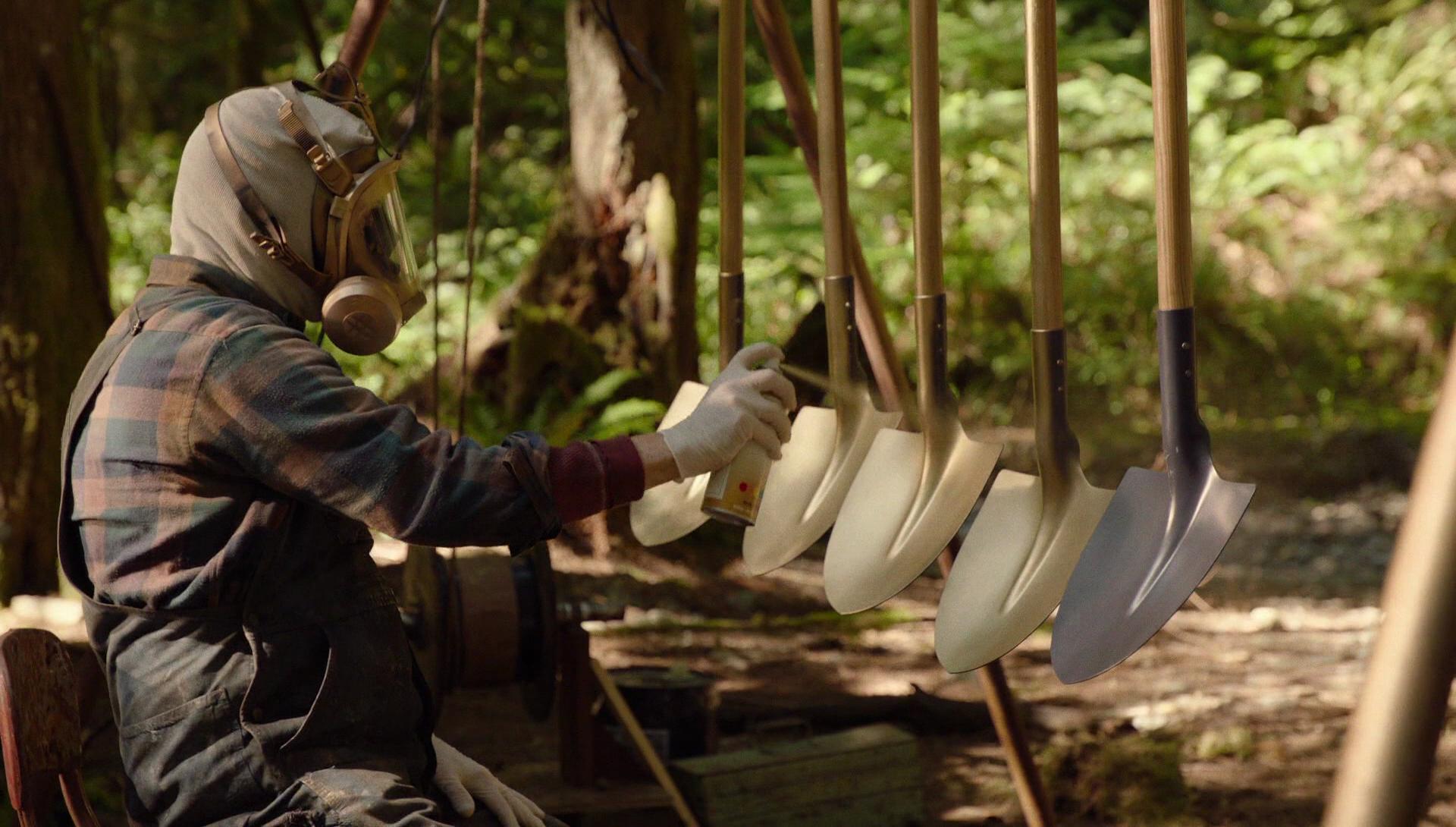 Apologies for the onslaught of images. You can see the full gallery (with a few added shots) here.

I will say that I was extremely put off by the effects during my initial viewing of these episodes, but looking at them in this way has changed my perspective completely - they are actually quite beautiful and I'm not sure that I've seen anything like it. I have collected a handful of stills from other significant moments that I would be happy to upload if anyone is interested.

Yes, please do. It was extremely informative to see screen shots from quick and crucial scenes.

Jacoby's ventilator is gold too, didn't notice that before.

These screenshots are really useful for seeing things that we might have missed the first time round, so much to take in!

Thanks for the screenshots and analysis! Seeing the box/monster and evaporation of Dougie side by side prompted me to think about the mist of blackness that fills the box (before the being arrives) and that Dougie dissolves into (+pearl, blob of matter).

It could just be a coinciding visual... but could one infer that whatever Dougie was "made of" (if he was indeed "made for a purpose") was the same substance that seeped into the glass box with the "monster"? Like, some sort of Black Lodge matter/essence?

Second thought, wrt/ the screenshots: someone in another thread pointed out that the box itself resembles a giant camera, with its lens facing out into the city sky (shaped like an eye). This camera-aesthetic is, I would argue, reinforced when Cooper gets sucked back out of the box... and echoed quite literally in the sound effect, which resembles a flickering shutter. And further reinforced by the fact that the box scene stages an image resembling a photographic negative: a ghostly figure against a black backdrop.

I think, on the one hand, that this is Lynch playing with viewers (a sort of metacommentary on the medium... which, here, is digital instead of film [and which some fans decry]). But on the other hand, the logic of photograph v. negative describes the relation between Cooper and Mr. C, and between other sets of dopplegangers. (Also, colour change is significant re: Leland's hair... maybe I'm reaching here but I dunno.)

Have you seen every single frame between the monster jump and the moment when he come back to ground? I have kept 2 frames.., in this phase, the faces changes many times ( every time different face... ) in this 2 frames it can be seen something like an old man.