The glass box, and what attacked the couple?

It could be the same being that is banging on the door outside the room Cooper ends up in before he turns into electricity. American Girl/Ronette Pulaski refers to it as her mother. The form of the being in the glass box is blurry, but it looks like it might be female.

"Mother" was beating on the door in the Outlet Room and Ronette said Coop must leave. He pops into the box while the teens were outside, then vanished. The kids come back and yadda-yadda-yadda, hi Mom!

Given that the FBI doesn't know who the building and the glass box belong to. Who else then is interested in a Black Lodge portal?

Lots of people investigated about it in the book, and in season two Windom Earle was trying to do the same. Could just be the government, using the billionaire thing as a disguise. To me it seems like it must be someone who's somehow connected with the Lodge, who made it possible for Sam to bring Tracey in, with the guard's absence not being a mere accident or a coincidence.

By the way the creature had a head that looks a little like the heart or whatever it is the pulsating thing inside all the branches in the new form of the arm. The difference is, it had what looked to be a human body, possibly a female body. I think we can't yet say, but some clues/options:

1) the arm says something like "beware of my doppelganger". Could be related.

2) Just as the arm changed his appearance from the LMFAP to a weird tree, this could be a new form of Bob. I'm not sure why he had to attack them though.

3) I'm not sure what else could be, but it has to be something related to the Lodge, as Cooper is sent there. One possibility is that it is just the Arm (no doppelganger). We know that his purpose is to stop Bob (or at least that's what he says in the original show). He might think he needs Coop to do that, so he has to open the gate (destroy the glass box) to let him out. Not sure why the kids have to be slaughtered in the process though.

In the beginning by the way I was open to the possibility that we were seeing the scene in a different space-time continuum than the one where the kids are attacked, maybe one where they survive (as it happens very often in Lynch's works). I thought that the decision to send Coop back or even the refusal of the evil one to return to the Lodge could've changed the timeline and thus what the kid experienced, but now I see the synopsis for the 3d episode stating that FBI agents are investigating on the kids murder, so I'd close that door, at least for now.

So when Tracey comes back for the second time, when the guard is not there and Sam looks for him, at that time Cooper appears inside the glass box and then he is sucked to that place.. and when Sam and Tracey go to the room there is nothing for a while until that alien thing which looks to me like a female kills them. Right?

So.. was that something that followed Coop? A spirit from the BL or something from another world? Some say it was Laura, i dont know, that thing looked liked a female i think so maybe but it was probably something with a higher power i guess that destroyed the box and killed the couple.

Yeah, it definitely seemed like something that had either followed Cooper or gotten in from the other side—from wherever he got sucked into. My impression was that the thing, whatever it was, was not necessarily *someone* we've already met in the show. More like a malign force... perhaps the very force that the box was set up to capture? Does anyone have thoughts on how the box clouded with darkness before the thing appeared? It appeared in a way that was SO different from how Cooper got into the box... and I wonder if that's significant.

Yes that was really interesting. Coop came inside the box in a different way than that thing! so maybe the box has to do with something else like creating or giving strenght to them. depending on who has made the box and who is resposnible for it and what aim they have. that thing no doubt was powerful, nothing similar to Cooper. Probably as you said to the thing is something new in TP.

Yes, liking this theory... makes a lot of sense.

I concur with the idea that it's related to Project Blue Book. Didn't the chamber where Nixon and Milford visit contain a Gray-alien like transdimensional being in a similar fashion? - IE: a seat away from a glass box type set up?

Seems plausible! In that case, Audrey (or someone) must have known that Cooper was trapped in the Red Room/Black Lodge and not in the world... so she would have had to have inside information. But I would assume someone looking for Cooper would start by tracking down Mr. C... Unless the box is part of a multi-modal effort?

According to Secret History, Audrey was left in a coma after the bank explosion... so she would likely not have encountered Doppleganger Cooper unless she recovered extremely quickly... or if he happened to visit the hospital (to see Annie?).

My initial impression was that the box was intended to transport/trap/communicate with something other than Cooper, and Cooper just happened to be what came through... it seemed along the lines of what Windom Earle was up to re: trying to tap the energy of another dimension. If it was intended to find/communicate with/transport Cooper, then I wonder if it worked. I mean, was it the box that threw him back out into space? Could it be that he got thrown back because he wasn't the intended target in the first place? Maybe he got caught by the box because he was free falling through dimensions and was sucked in by whatever portal the box represents?

This is exactly what I just looked up to confirm. I think these are the same type of set up.

Personally, I would say that the ghost is the blind women Cooper met after falling moments after being in the glass box. I guess glass box is some kind of Project Blue Book experiment created to capture ghost/entities from Black Lodge/Shadow Universe.

In episode 3, the blind woman moves her hands like they were sharp sword in a way that seems she wants to warn Cooper of something. 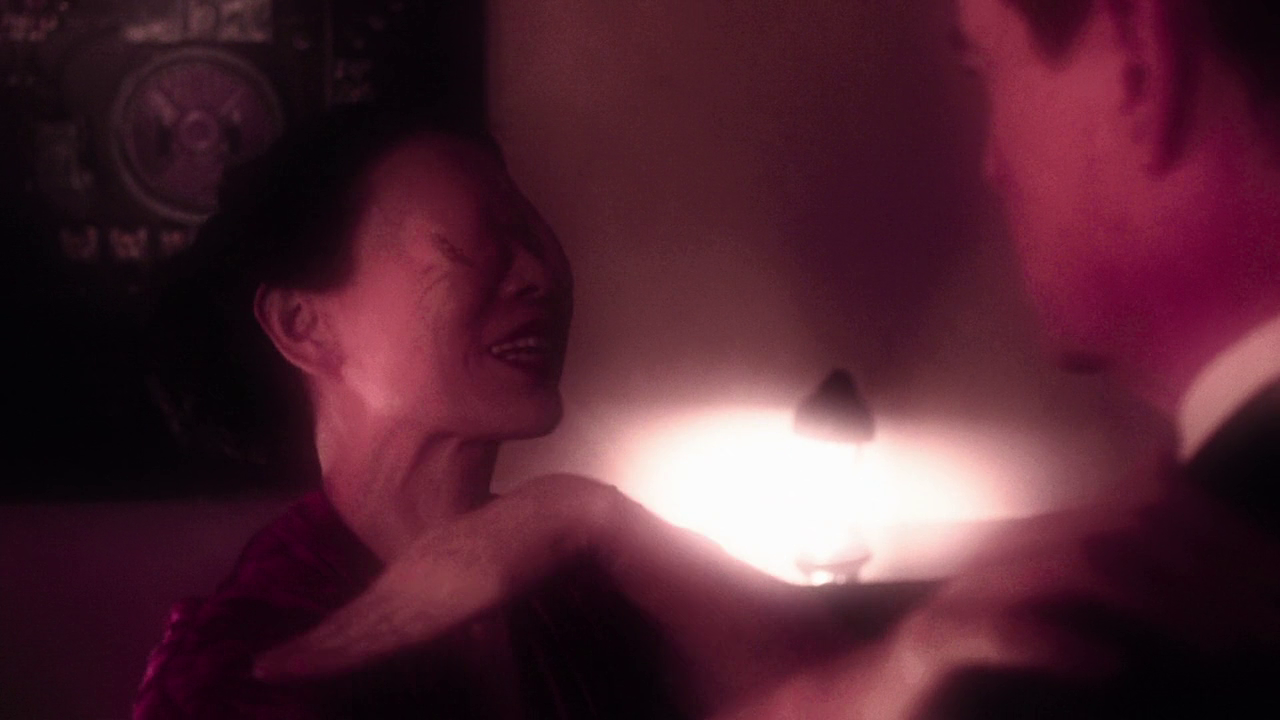 After, she climbs a ladder, flip a switch and after being hit by electricity we see her falling in to the void like Cooper did few scenes before! 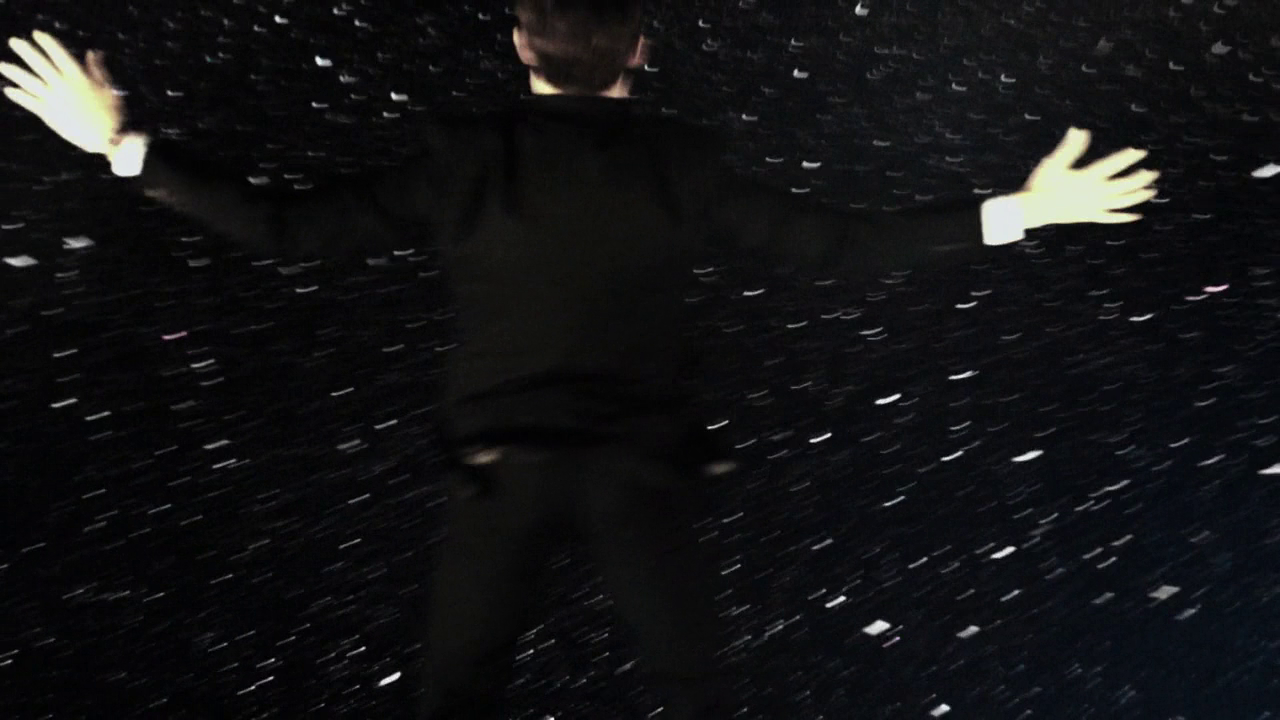 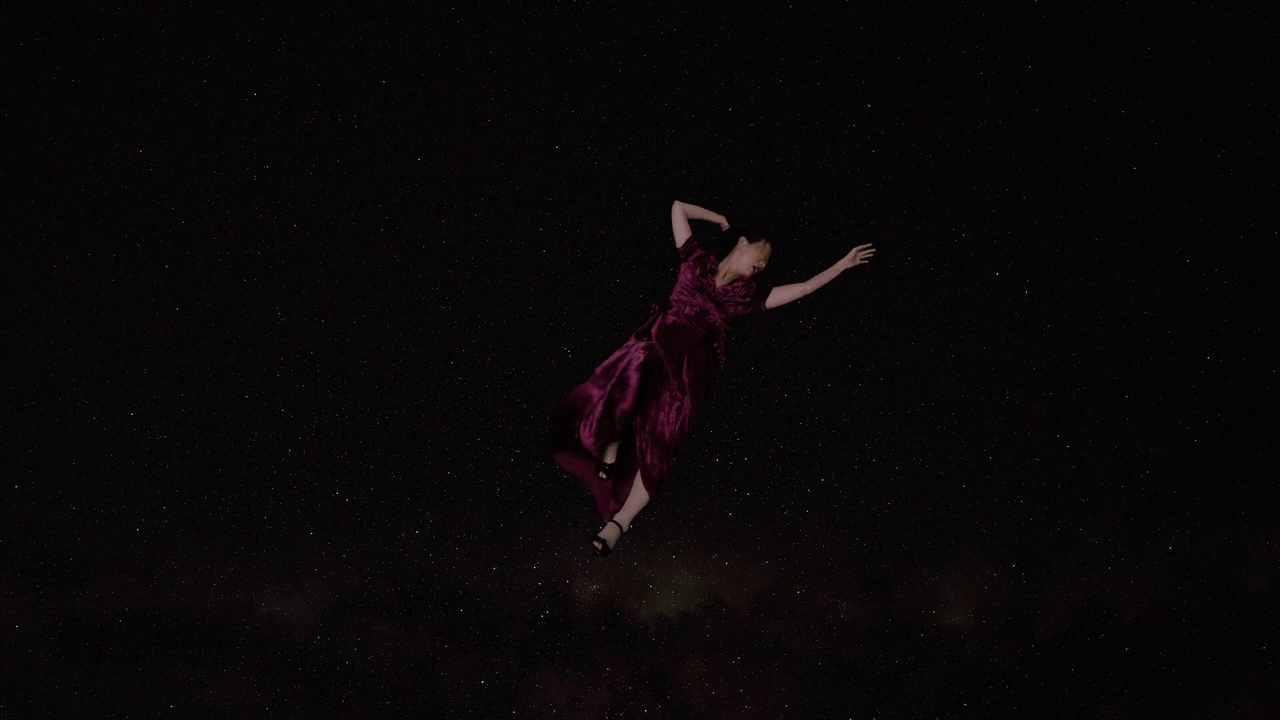 Probably, the ghost is an evil entity who feed on sex and fear as Bob does. In fact, both guys were a bit scared about the disappeared guard and eerie situation but this clearly doesn't stop them from having a little fun. Don't know but I'm pretty sure this ghost came from the same place where Cooper met the blind woman and Ronette look-alike.

Also Coop was inside the glass box when Tracey and Sam where outside the room looking for the guard. Then when they got in the room making out the thing appeared in the box, moments before Coop was with the Blind woman when she falls and maybe she got inside the box. A timeline play thing but it can be like that.